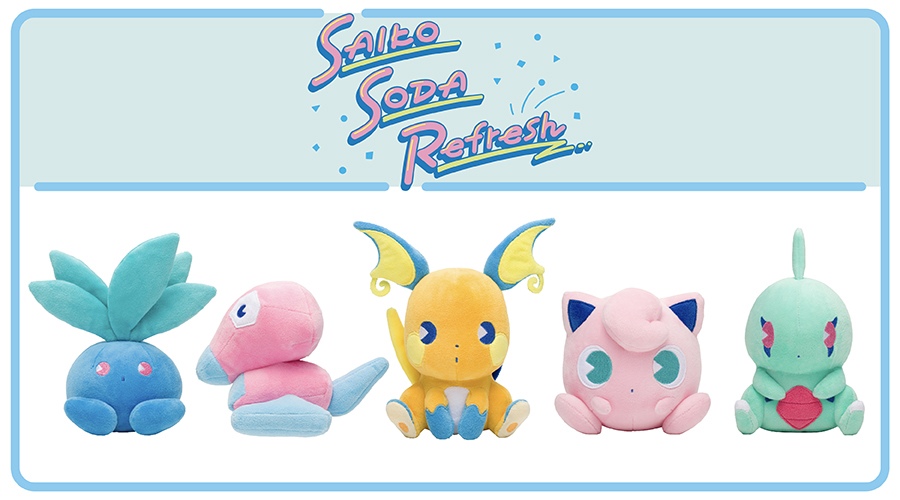 Illustrator/ graphic designer F*Kaori and the Pokémon Center are collaborating once again. This time, it’s for some cute additions to the Saiko Soda series.

Like previous Saiko Soda items, the five retro-themed plushies appear to have classic cartoon–inspired wingding eyes. That’s a feature often seen in F*Kaori’s illustrations, including the logo she uses on Twitter and Instagram.

And they’re all as cute as humanly, or Pokémonly, possible. (That’s another common theme when F*Kaori is involved.) The five Pokémon featured in the Saiko Soda Refresh line are Raichu, Oddish, Jigglypuff, Porygon, and Larvitar. They were all released on Thursday.

A lot of F*Kaori’s art has a totally 80s flair to it. We saw it last year with her pastel 80s pop idol reimagining of Hatsune Miku and the rest of her Vocaloid friends. We can also see it in her previous Pokémon/ FILA Fresh Water collaboration from 2019. It’s like she’s taking the franchise back to a decade that it missed the first time around.

She put her fun, retro stamp on the Saiko Soda line when it first appeared briefly in 2018; and OTAQUEST’s Lachlan Johnston raved about it at the time. Other activities we’ve loved of hers includes making an album cover, and other collaborations with punipunidenki as well as her take on Promare ,where she made it look a whole lot cuter. Hopefully we’ll see more from F*Kaori soon.

The main page for the plushies is here.