Pokémon: Mewtwo Strikes Back Evolution Review: A Pointless Review on a Pointless Movie 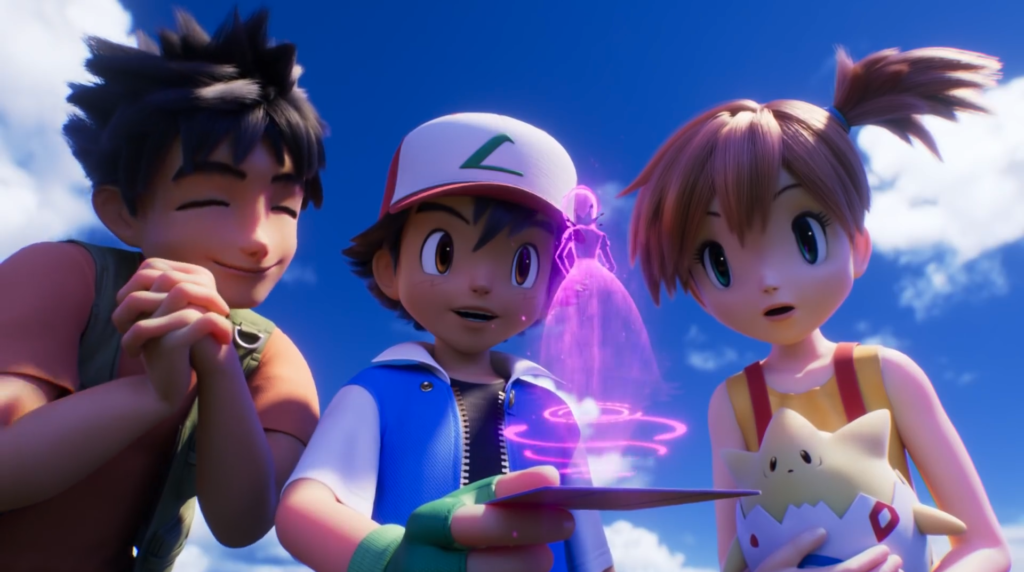 When you think about it, it’s odd that, ever since its initial reveal, there’s been a lot of trepidation in regards to the recently released Pokémon movie, Pokémon: Mewtwo Strikes Back Evolution. The first-ever Pokémon movie is still a beloved creation because of a mix of nostalgia and the fact it’s a genuinely good film in its own right, so a movie promising to retell this beloved story shouldn’t have any problems drumming up excitement for itself. After all, Disney has no issues hyping up its remakes before even a visual or cast announcement has been announced, simply by virtue of it being a remake of a beloved film. The reason this appeared to not be the case here was an initial fear about how the film seemed to offer very little new while also remaking it using CG animation which was, shall we say, divisive.

Now that the film has released, how does Pokémon: Mewtwo Strikes Back stand up on its own merits? Unfortunately… not very well.

Since I imagine that most of the people reading this review will be people who have actually seen the film at least once since its release over 20 years ago, writing a synopsis almost feels pointless, yet it’s best to bring people up to speed regardless, just in case. In this movie, experimentation on a piece of DNA from the legendary Mew leads scientists to genetically create a brand new Pokémon based on this data, Mewtwo. This Pokémon, unhappy about his designation as an experiment, frees himself from human control and decides to try and find out their own purpose and who they are. As part of this, Ash Ketchum and a few other trainers are invited by Mewtwo to battle with it, but after learning of their true intentions attempts seeks to hinder the Pokémon’s plans before its too late.

The film has many problems, but let’s bring up the one most people spoke about ever since its unveiling: how the film looks. Though this may initially sound like a regrettable confirmation of the fears people had prior to the film’s release, that’s not what I refer to when I say those words. While many people complained about some of the designs for the characters ever since its initial trailer was uploaded online, when the film is viewed on its own terms they fit naturally within the film and actually end up looking pretty nice. They do look rough at times, admittedly, and I feel they could have potentially done a better job of things had they instead chosen to redesign the characters from scratch instead of sticking so rigidly to the original film’s aesthetic; similar to how the character designs for the upcoming Lupin the Third CG film are familiar yet have also gone through a multitude of amendments to work better within the confines of CG animation.

The issue I end up having is nothing to do with character designs. and more that the way everything comes together never ends up looking quite right, constantly pulling you away from the story the movie wants to tell. In the end, the visual design of this film is unable to gel together in the way the creators intended for it to. This is particularly odd when, as I mentioned, some designs such as Mew or Dragonite translate wonderfully into CG, and the strong work put into the live-action and CG hybrid that is Detective Pikachu earlier this year shows that it is possible to adapt this property into new mediums. Mew, in particular, is superbly handled in this film. In the initial film, the character was defined as a playful and almost mischievous Pokémon, and the jump to CG makes it much easier to effectively translate this personality quirk into the film itself, making this is one of the few points where I’d say this film has an advantage over the original release. 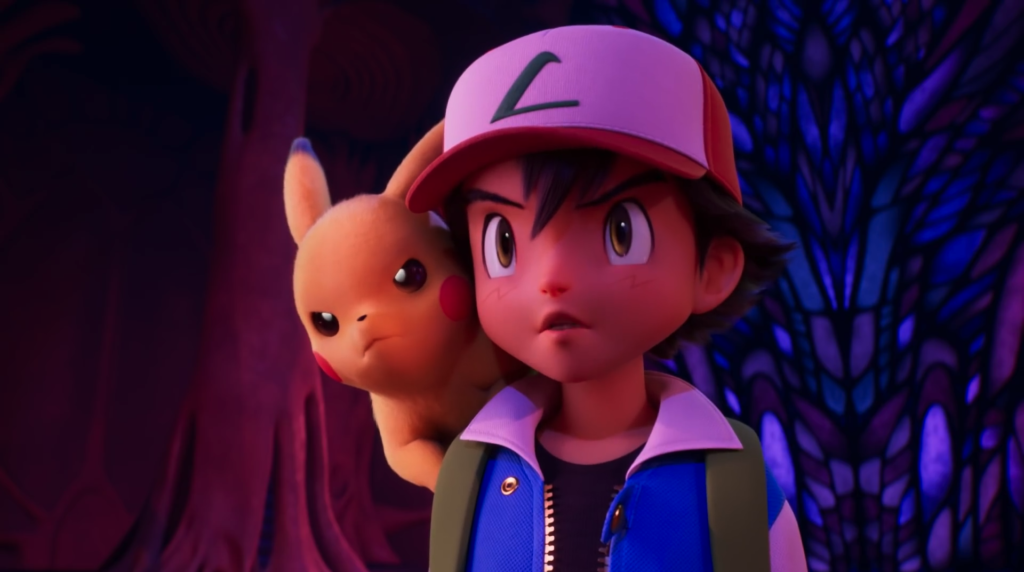 The reason it never seems to blend in the way the creators intended is, I feel, because of the animation, which at times looks rough and disjointed and overall fails to take full advantage of what CG allows them to do to enhance certain scenes. Characters sometimes move rather stiff and unnaturally, and strangely enough, it ends up being Ash and Pikachu who are the worst offenders in this regard. Pikachu often looks awkward when moving or in battle, while Ash’s movements look almost robotic as he commands his Pokémon in the film’s opening battle and at other points of the film.

If I’m being honest, it’s the inability to properly utilize the film’s new medium to effectively enhance the original story that comes across as the biggest sin. Scenes feel like wholesale outtakes of the original, and largely due to the dedication of recreating the original 20-year-old film, many moments feel static as a result. Moving into CG could allow for grander Pokémon battles or could facilitate the implementation of ideas that can be more difficult and time-consuming to achieve in traditional animation, yet nothing like that ends up happening, no matter how much you beg and perhaps expect it to occur as you sit watching the movie.

Which brings me, finally, to the story. Usually, any remake would make some sort of change to the story, if not necessarily to improve the story than at the very least to make the existence of such a creation justified by virtue of it telling a different story. This movie doesn’t do that. While I would hesitate to say it was the exact same film, when you compare the two films against each other and the only changes you can point out are so minor (such as the use of a different move by a Pokémon) I’m left questioning whether it was actually different or if I ended up imagining this in order to find some way to justify the time investment I put into this; it undermines the point this movie even has to exist in the first place. 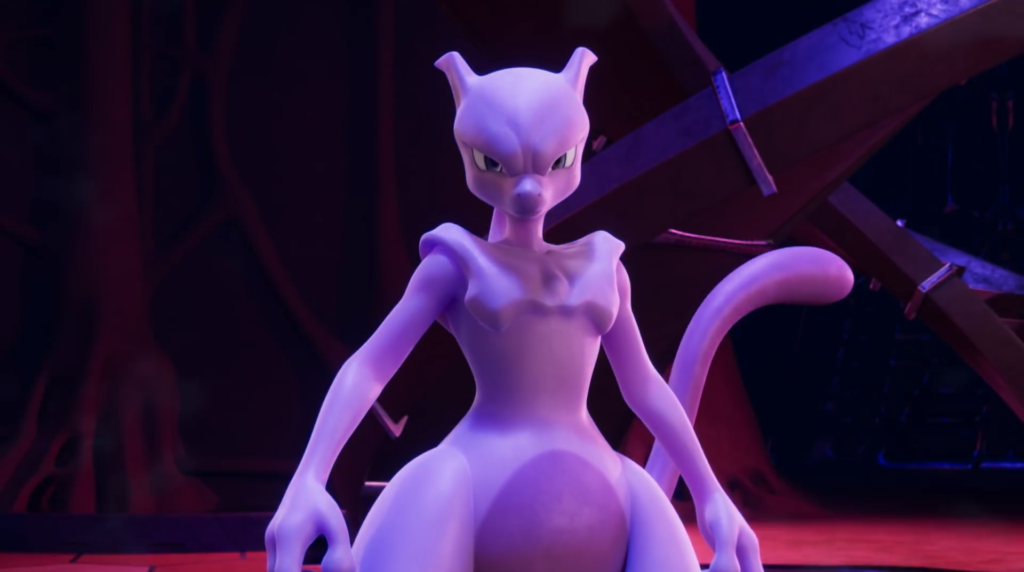 This has other unintentional consequences as well. The original Pokémon movie was released in concurrence to the anime that was airing at the time, and in turn, elements of the story tie into this, as well as the characters. A young kid going to the cinemas to see this film today may only know Brock and Misty from their appearances as gym leaders in Pokémon Let’s Go, and not from their role or characterization within the original anime. When Brock acts out his signature gags of flirting with Nurse Joy and Officer Jenny (telling the exact same jokes as he did before, no less), an older fan may understand why he’s acting the way he is while a young fan is simply left scratching their head. Other moments within the film have the same issue, making it difficult to understand why a person or Pokémon may act in a certain way without the context of a two-decades-old anime series to bring you up to speed.

I struggle to understand who this movie is for. By telling the exact same story, even down to how exact jokes and scenes play out, it offers nothing new to older fans who may remember seeing the original film at the time it was released. With issues in the animation, it has no worth to such a fan pining with nostalgia for the original film, as that film is a superior version to this one in every regard. For a younger fan, the reason why certain characters act in the way they are will make no sense without this child choosing to watch the original series, which is only harming the experience. When the original film can be bought on home video for even less than it costs to buy a cinema ticket while offering a superior experience in almost every regard, it’s impossible to say that Pokémon: Mewtwo Strikes Back Evolution is worth your time.

And yet, in spite of all this, it’s difficult to say this movie has absolutely no worth. It may be anecdotal, but the young kids in the audience did seem to have a good time in the screening I was in; and who am I to say they shouldn’t watch it if they like it? Personally, though, I’d just stick the original film in front of such a child. With the film still holding up today, it won’t be like they’re missing out on anything either, and they’d most likely enjoy it more.

It hurts to complain about this film like this, it really does. I wanted to like Pokémon: Mewtwo Strikes Back Evolution, as I never saw the original Pokémon film in cinemas, making this the first chance I’ve ever had to see this story on the big screen. Writing this scathing of a review is no easy task, I can assure you.

As the credits ended (a credits sequence punctuated by some absolutely adorable pieces of artwork from young fans of the series), we received a brief preview for a new 2020 anime film that returns to the hand-drawn aesthetic while embracing the charismatic character animation found in the most recent Pokémon TV series. Pokémon: Mewtwo Strikes Back Evolution may be a disappointment, but hey… there’s always next time, right?

Pokémon: Mewtwo Strikes Back Evolution is now showing in Japanese cinemas, and you can find more info on this film over on its official website.