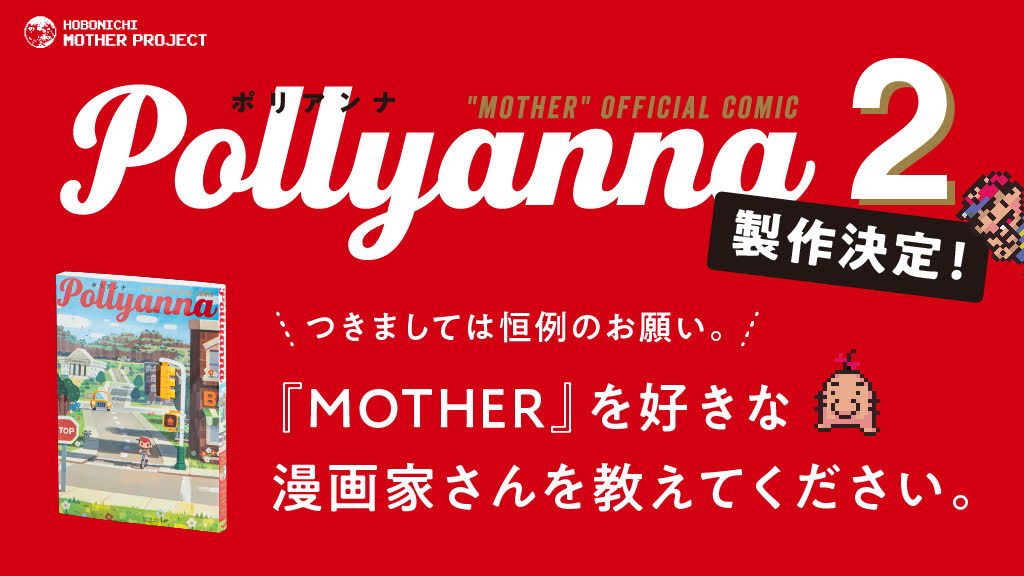 Following the success of the first Mother official comic Pollyanna, and as part of the long-running HOBONICHI MOTHER PROJECT that celebrates the legacy of the Mother franchise, a second comic tentatively titled Pollyanna 2 is now in the works. And they’re searching for new artists to appear in it!

Shigesato Itoi, the creator of the Mother/Earthbound series, is most known now for running Hobonichi, the company behind the popular Techo planners, among other things. Over the last year, the company has been paying tribute to Mother with the ongoing HOBONICHI MOTHER PROJECT that’s seen the company release everything from Techo planner covers to complete scripts of all the Mother games in a single collection.

The first release in the project was a loving tribute to iconic scenes from the Mother series, titled Pollyanna, that brought 35 artists together, including Undertale’s Toby Fox, to create short comics that paid tribute to the games. It was a great release for fans of the series, with stunning artwork throughout.

With the announcement of Pollyanna 2, Hobonichi wants fans to nominate themselves or other manga artists to take part in producing comics and artwork. From there, Hobonichi will reach out and negotiate directly to the artists they wish to feature in the comic. From these negotiations and by talking to fans, the schedule for release, format and number of pages for this second volume will be decided.

That means that you, the person reading this article right now, could nominate themselves to be featured in this official tribute to the Mother franchise!

If you’re interested in taking part in the Pollyanna 2 comic project, you can either reply to the official Hobonichi Mother Project Twitter account or email [email protected] with the subject header ‘Pollyanna２漫画家候補’ from now until 31 March. If you are going to make a submission, I wish you the best of luck!

other Eddie Lehecka 11 months ago