The infamous 4-koma manga Pop Team Epic has entered “season 4” of it’s serialisation on Takeshobo’s website Manga Life Win. Despite statements that the previous chapter (part of “season 3”) would be the “final one”, it appears the series is continuing on but with a bit of a twist. The art is being taken over by Boys-Love Manga artist Harada (Yata-Momo, Color Recipe), who will be depicting the two 14 year old girls, Popuko and Pipimi, as bishounen instead. Despite the change of artist, self proclaimed “japanese kuso manga boy” Bkub Okawa is still listed as the original creator.

Harada has opened things up with a BL rendition of the beloved “are you upset gag”. The progression is exactly the same, apart from the fact that both the girls are high school boys. There’s also an inclusion of a love heart at the end of “I’m not upset”, which is a pretty cheesy way to adapt it into BL. 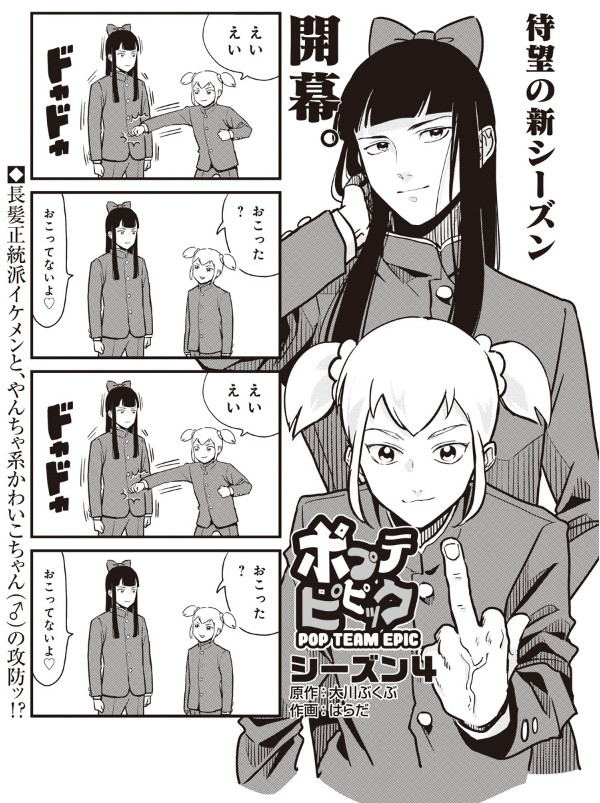 Given the nature of Pop Team Epic it’s hard to tell whether this is the series just pulling our legs. This shake up could easily just be to bit of a breather of Bkub, who has been at it for a while now. Conversely, it could genuinely be one last hurrah for the series, after all how many gags can one person come up with until they’ve run out of jokes to make. The in-manga explanation at the conclusion of “season 3” involves a Takeshobo editor detailing to Popuko and Pipimi that they’re handing over the reigns to the BL department due to a dip in popularity now that the anime has wrapped up. That being said, the authenticity of that statement is completely up in the air. In fact, we don’t actually know whether this is a real “season 4”. While Bkub has tweeted about the series starting season 4, the Manga Life Win website still catalogues it as season 3, which is incredibly suspicious. Regardless of what may actually be going on, we hope the series the best going into the future.