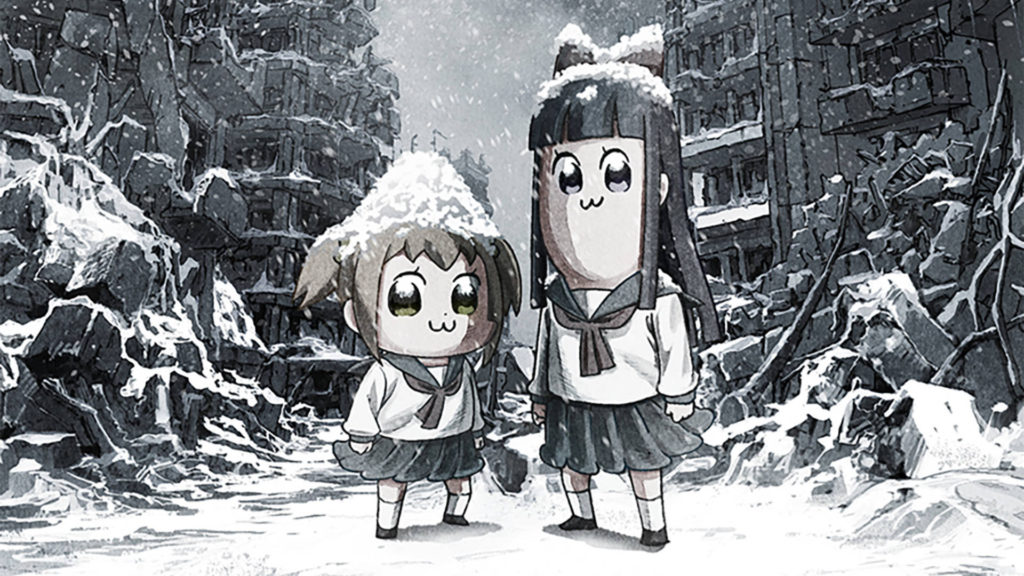 When Bkub Okawa had the first volume of surreal 4-panel manga series Pop Team Epic published in Bamboo Comics Win Selection during late-2015, it would have been near impossible to imagine the level of success the series would attain. Now, a little over two years later, Pop Team Epic is destroying charts and topping fan opinions both inside and outside of Japan — so what happened? To understand this, there’s definitely a few other details you’ll need to know first.

When it comes to marketing any series in Japan, a solid brand is everything. Following closely after that is having a backer that will guarantee your voice is heard, and for Pop Team Epic, they had both. If people didn’t know about the original 4-panel series, they absolutely used or had seen the Pop Team Epic Line stamps, the go-to messaging app in Japan. For many over here, the original content was irrelevant, it was all about the branding of both Popuko and Pipimi and their outstretched middle fingers that were so easily identifiable.

“Pop Team Epic has become almost as identifiable as franchises like The Simpsons here in Japan,”

It didn’t take long for King Records to get involved in the series, and that’s when things really started to pick up. Suddenly it went from well-known inside joke to cultural phenomenon — something quite ironic for a series that frequently pits itself against pop cultural norms. Whether it was your local arcade, anime store, or even the streets of Tokyo, nowhere was safe from the exposure of Pop Team Epic. The series was the perfect mix of quirky and accessible, often utilizing a number of outlandish skits to throw readers off their guard. It had the formula for success in its grasp.

On January 7, 2018, this success was taken to all new heights, and that was due in no small part to the release of the Pop Team Epic anime series. Pulling no punches, the anime went straight after the big players, lampooning both your name. and Kemono Friends within a space of 10 minutes, all while tossing in a number of other incredible skits. Viewers were sold, and Pop Team Epic rapidly became one of the hottest topics in Anime around the globe.

From an outside perspective, it’d be easy to view Pop Team Epic as a throwaway series filled with short gags and parodies of already popular anime. Take a step back though, and you’ll see that Pop Team Epic has become almost as identifiable as franchises like The Simpsons here in Japan, even without knowing about the anime or original comic existence. Just take a look at images that surfaced after a Popuko mask giveaway in Akiharaba last week (fitting to know that the tweet itself is from an emergency services account that only tweets when a disaster occurs):

So while Pop Team Epic is enjoying a large amount of excitement online, saying the series is somewhat of a phenomenon definitely isn’t an overstatement. Where Bkub Okawa decides to go from here remains somewhat of a mystery, but until we find out we’ve got one of the freshest anime in some time to enjoy.

If you’re yet to check out Pop Team Epic, the series is available for streaming on Crunchyroll and is a must see this season.