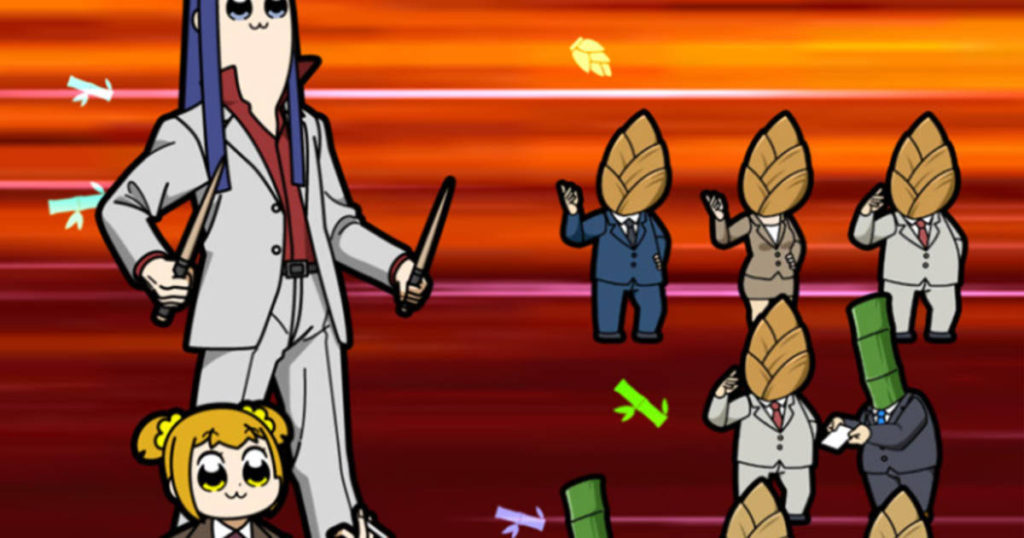 Although Pop Team Epic may have finished it’s chaotic twelve episode anime run back in January (was it really that long ago?), Popuko and Pipimi aren’t done quite just yet.

12:30 on Wednesday saw the surprise release of the series’ first mobile game, titled Takeshobo Quest ~Pop Team Epic Assaults~, on all major smartphone marketplaces. In the game, you control a team of Takeshobo employees as they withstand the assault of Popuko and Pipimi on their employer, in a real-time strategy game that is sure to be filled to the brim with the series’ trademark off-the-wall humor and general weirdness.

The release of the game came with the rather surprising announcement that your first pull on the gacha would net you 10,000 gacha tickets to use, which may seem incredible at first glance, but actually makes sense when you consider that the only way to gain more units for your team is by using the gacha, and you tend to go through units quite quickly as you battle Popuko and Pipimi in the various stages. Therefore, you might very well need 10,000 pulls just to play the game properly.​ It would be useful to comment on the gameplay, but unfortunately, at the time of writing, the servers for the game are undergoing maintenance. It seems like a strange time to schedule maintenance since the game just launched, but it does mean that any gameplay impressions will have to be left to a later date. That being said, it can be gleaned from the various screenshots and the press release that the battles for the game will play out “automatically,” so the main source of strategy will supposedly come from setting up your team correctly before battle.

You can check out more information about the game as well as download links through the delightfully 2000s-era styled official website.