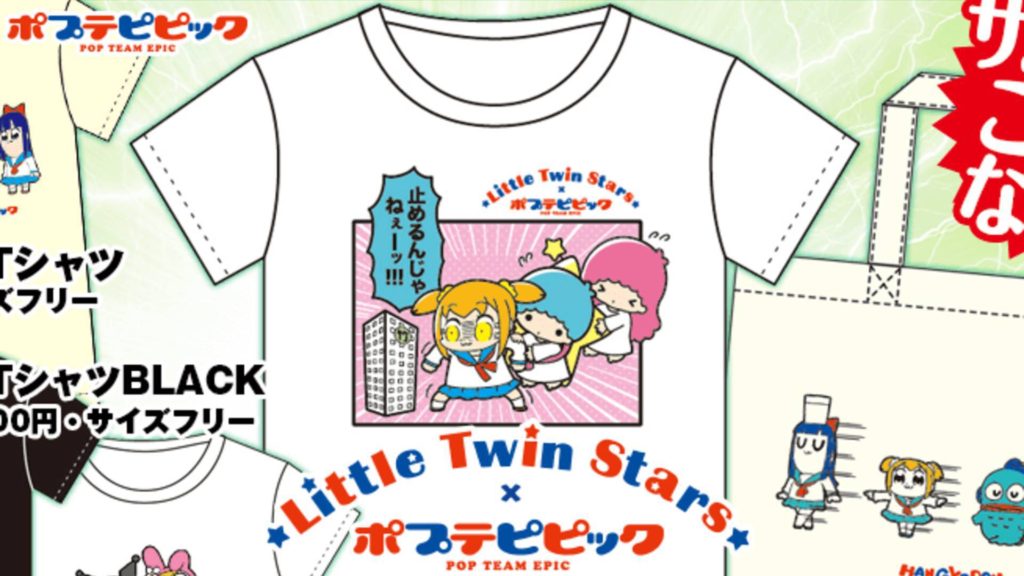 Chances are the last thing floating around in your head while admiring the adorable roster of characters from Sanrio’s extensive history is Bkub Okawa’s obscene Pop Team Epic duo Popuko and Pipimi. Unfortunately for you then, some sick, cruel person at Takeshobo, the publisher of Pop Team Epic’s 4-coma manga series, decided it’d be a good idea to pair the two up. Teased via Takeshobo’s official website, the worlds of Pop Team Epic and Sanrio are set to collide for a limited-run of Comiket 94 goods. Whether its Little Twin Stars, My Melody, Pompompurin, or even Hangyodon, it appears nothing is sacred when it comes to Pop Team Epic. The unlikely collaboration sees itself spread out across four different variants of t-shirts, as well as a tote bag. Captioning the announcement image is a special “We’re sorry, Sanrio.” message as well as the subtitle “A collaboration between some seriously popular characters and some not so popular characters!”.

Those hoping to get their hands on some of the merchandise will need to make their way over to Takeshobo’s booth at Comiket 94 next month, which will be taking place at Tokyo Big Site from August 10 – 12. Also set to be made available at the booth will be Ms. Koizumi Loves Ramen Noodles, Made in Abyss, and Akagi goods. Those familiar with Comiket will know, however, that merchandise does not last long, so you’ll want to get in quick. Further information can be found via Takeshobo’s official website.