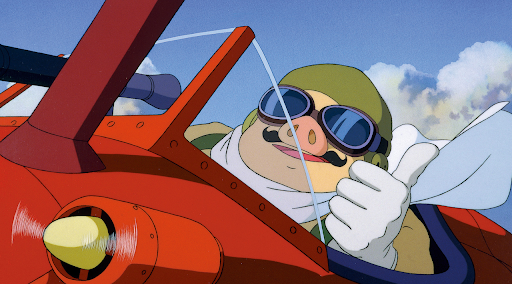 Usually, when the topic of favorite movies by Hayao Miyazaki and Studio Ghibli comes up, the most prominent ones are movies like Spirited Away, Howl’s Moving Castle, even Ponyo. Certain films from the acclaimed director and studio tend to fly low under the radar, such as his 1992 release Porco Rosso. The story of a high-flying hog in the Mediterranean sea between WWI and WWII is a bit of a deep cut among the Studio Ghibli pantheon, but it’s still among the finest from an animation perspective.

Voice-Over Legends Make up the Voice Cast of Porco Rosso

For fans of the English version of the movie, they may well remember the fantastic voice cast of Porco Rosso having them play the “doesn’t that sound like” game for the entire time. Porco (Or Marco, as he was known pre-piggening) is voiced by Michael Keaton between his time as Batman and his time starring in Birdman. For a character like Porco who is supposed to have an almost effortless cool he really does an excellent job putting that across.

Cary Elwes’ character, Curtis, somehow looks more like Cary Elwes than he sounds, which is a very interesting confluence of casting and voice directing. As “the American” Curtis talks in a slight southern twang the entire time, which isn’t exactly the accent fans of The Princess Bride are familiar with. Curtis does, however, look like a direct caricature of Cary Elwes, which is wonderful.

Moviegoers in 1992 probably recognized the voice of Gina after she stopped singing in French as Susan Egan. Susan Egan was the voice of Belle in Disney’s Beauty and the Beast, which premiered the year before, and would later come back to the world of Studio Ghibli as Lin in Spirited Away.

Before she began getting film and TV roles she got her start as a Broadway performer, so it makes sense that she has a history of singing roles like that of Gina.

Before Spirited Away she appeared in another Disney film, Hercules, as the voice of Meg, and returned to that role in Kingdom Hearts 2. You may have also heard from her recently, as she is currently the voice of Pink Diamond/Rose Quartz on Steven Universe.

David Ogden Stiers, the voice of Grandpa Piccolo, would also come back for another Studio Ghibli film, as he voiced Kamaji the spider in Spirited Away. He also provided the voice of the Narrator in the English Version of My Neighbors the Yamadas, as well as many other voice-over roles over the years. Because of his work voicing Dr. Jumba in Lilo and Stitch, another Disney movie, he appears in the role in Kingdom Hearts: Birth by Sleep. He also provided the voice of Cogsworth in Kingdom Hearts 2.

Fio Piccolo is one of the best characters in the movie, talking down a gang of sky pirates and smashing 1930s gender norms while being an exceptionally gifted aeronautics engineer. Kimberly Williams-Paisley didn’t have any real voice-over roles outside of this, but if you were a fan of primetime TV in the 90s and 2000s you probably heard voices before in shows like According to Jim and Two and a Half Men.

There’s also a ton of other bit characters in Porco Rosso, whose voices crop up pretty often in the world of animation. Brad Garrett, voice of the leader of the Mamma Aiuto gang, has appeared in numerous TV roles both live-action and animated, including Everybody Loves Raymond, Finding Nemo, and A Bug’s Life. He also voiced Trypticon in the 80s Transformers series and Bull Max 7 in one of the 1998 Voltron iterations.

Frank Welker, another Mamma Aiuto gang member, has lent his voice to so many characters over his career it is easier to ask what he hasn’t appeared in. One of his most famous Western animation roles is Fred Jones from Scooby-Doo but he appeared in other Studio Ghibli movies as Gol from Nausicaa of the Valley of the Wind, and he even voiced Totoro and the Catbus in My Neighbor Totoro.

He’s also appeared in many of the Transformers series, animated and live-action, as well as Ranma ½, Inuyasha, Tenchi Muyo, and even Ogre Slayer.

Kevin Michael Richardson has also voiced many, many, animated characters over his career, including a member of the Mamma Aiuto gang. Fans of animation have no doubt heard his voice in one role or another, but if you’ve seen Afro Samurai: Resurrection or any of the recent iterations of Transformers you’ve definitely heard his voice crop up.

The Mamma Aiuto gang also includes Bill Fagerbakke, who has voiced a few Transformers of his own, as well as Steve Long in 3×3 Eyes. He’s also notably the voice of Patrick Star in Spongebob Squarepants, and some of his co-stars also appear in Porco Rosso. Rodger Bumpass, the voice of Squidward, also has a brief role in Porco Rosso as one of the pirates. The voice of Spongebob, Tom Kenny, voices Ferrari, Porco’s friend in the Italian Air Force.

If you’re a fan of animation there are so many more voice actors in the cast that you may pick up on, like Rob Paulson or Tress Macneille, who in addition to being every other female voice in The Simpsons and Futurama also appeared in Nausicaa, Castle in the Sky, Princess Mononoke, and Kiki’s Delivery Service.

Is Porco Rosso: The Last Sortie Touching Down Soon?

Fans of Studio Ghibli and Hayao Miyazaki are always curious as to whether there will be a sequel to one of their beloved movies, and Porco Rosso is no exception.

In fact, Porco Rosso might have more fuel for the “will there be a sequel” fire than most other Ghibli properties. There are a couple of interviews where Hayao Miyazaki expresses an interest in creating a sequel to Porco Rosso set during the Spanish Civil War and entitled Porco Rosso: The Last Sortie.

Currently, Studio Ghibli is working on an adaptation of the classic Japanese novel How Do You Live? Written in 1937, How Do You Live? Is a coming-of-age story focusing on a young boy and his uncle as they learn about the world and each other. There’s no telling on when this adaptation will be released, but it seems like any hope for the continuing story of Porco might lie with a manga adaptation, but there’s no word on that either.

Porco Rosso is an interesting addition to the Studio Ghibli library because it’s very much a film for adults, not because there’s any blood or sexual content, but because of dealing with themes like loss, fascism, and being generally disillusioned with the world.

These are things that would very much be out of place in a film like Ponyo, but it works very well in the world of Porco.

It’s also a great film for showcasing the ability of Studio Ghibli and Hayao Miyazaki to create realistic-feeling machines; the planes and boats all feel like the way they operate makes sense, which gives the film a strong sense of animation craftsmanship.

Porco Rosso may be a deep cut Ghibli-wise, but it’s definitely essential viewing.