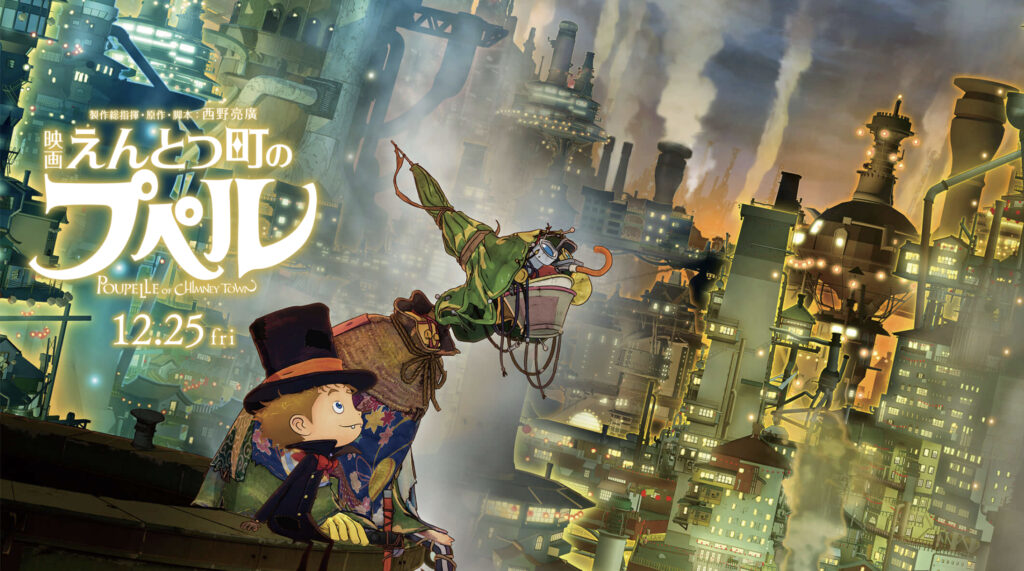 Ahead of the film’s release in Japanese cinemas on Christmas Day, Studio 4C has released the first 3 minutes of their upcoming CG anime film Poupelle of Chimney Town on YouTube.

While Children of the Sea was a gorgeous visual showcase in Studio 4C’s last cinematic outing, the film stumbled when it came to telling the dense story of the manga in the runtime. It did showcase the talent of the team at the studio and made me interested to see what was next after a period of silence. That film is Poupelle of Chimney Town, a visually unique CG family film set to release in Japanese cinemas on 25 December. Ahead of release, the first three minutes of the film (which establish the movie’s setting) have been released on YouTube.

Poupelle of Chimney Town tells the story of Lubicchi, a young boy living in the titular town that, due to being surrounded by a 4000 meter wall and shrouded in chimney smoke, is unable to see the sky. Lubicchi believes and yearns for the stars and sky, and his life changes when he runs into Poupelle, a creature made up of and born from trash, on Halloween night.

This short three minute clip, taken from the beginning of the film, introduces Chimney Town to the audience and shows the inciting incident of a heart falling from the sky that brings about the birth of Poupelle. While many anime fans can be skeptical of CG animation, the film is an adaptation of a beloved children’s picture book by comedy duo King Kong’s Nishino (who serves as producer on this film), with this style lending itself brilliantly to CG animation. Even in just this brief clip, there are a number of impressive scenes, especially the birth of Poupelle.

Poupelle of Chimney Town will release in Japanese cinemas on 25 December before a worldwide release in 2021.  You can find out more about the film over on the official website.