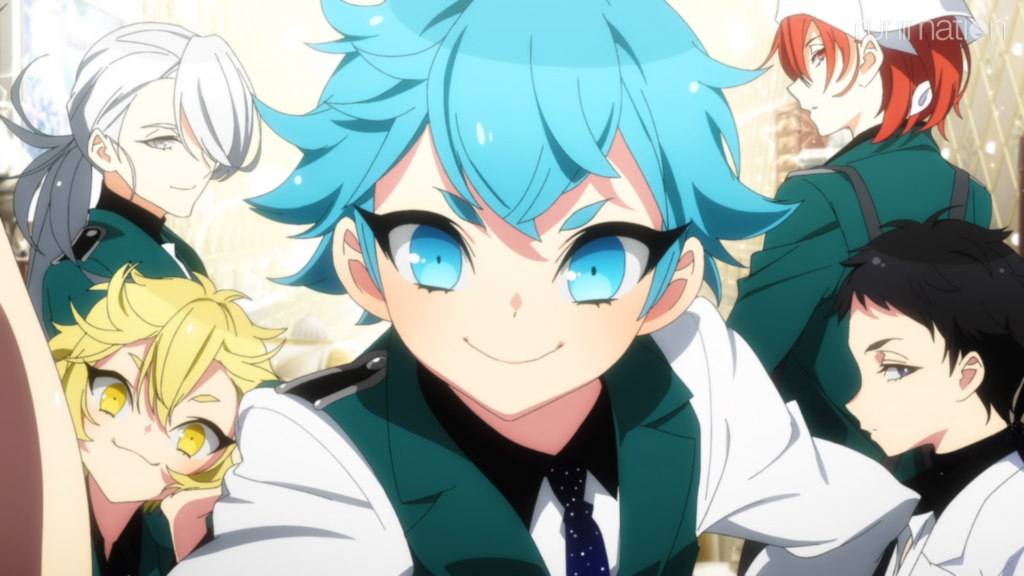 Pretty Boy Detective Club had been on our radar since its initial announcement half a year ago. Whenever Akiyuki Shinbo and Shaft team up to adapt a light novel originally penned by Nisio Isin (NisiOisin), good results are all but guaranteed. Case in point, the Monogotari series with its myriad heroines waltzing through the show’s innumerable iterations have earned the franchise an undying fandom for well over a decade now.

Nisio Isin’s almost supernatural talent for ridiculous yet poignant banter, combined with Akiyuki Shinbo’s penchant for all sorts of atypical visual direction, has to this point been a match made in heaven. It taking twelve years for all parties involved to say ‘hey, why don’t we whip something up and, opposed to a super-natural harem, drizzle it with a bunch of fashionable guys this time’ feels short-sighted in retrospect with the obvious formula just sitting there.

Well, now Pretty Boy Detective Club Episode 1 is out and, instead of Monogatari-but-with-guys, we have Ouran High School Host Club 2.

We’re sure we’re not the only ones making the Ouran High School Host Club connection (sorry if it feels like lazy criticism), but we’d hesitate to even use the word ‘similarities’ with just how much overlap exists between the two.

Of course, we knew going into Pretty Boy Detective Club Episode 1 we were at least going to be reminded of the beloved 2000s shojo classic. As if the name of the show wasn’t already a dead giveaway, the simple plot synopsis of ‘a girl enlists the help of her school’s convenient detective club which just happens to feature participation exclusively by its attractive male population’ made the connection clear enough.

What we didn’t outright realize going in was that these pretty boys would all also be absurdly rich and absolutely perfect at everything they do, just like those Ouran boys. The opening scene of the show features the show’s one girl Mayumi with a short haircut and in the boy’s uniform, just like the one Ouran girl.

To be fair, Ouran High School Host Club didn’t invent the rich school-boy investigation unit. The earliest instance of that we can specifically think of would be Clamp School Detectives, but one imagines that manifested through the myriad shojo trends of its time.

Once we look beyond the premise, and the archetypes, and the fact that they even snuck in a little blonde boy in the mix just like Ouran, Pretty Boy Detective Club Episode 1 portends a very different show, with two competing visual paradigms at play. Instead of the handsome but reasonable designs of Ouran Host Club era, we’re treated to a cavalcade of boys who very much look like they crawled out of modern smartphone otome games like Twisted Wonderland. Unrealistic hairstyles and slender bodies are nothing new, but these Pretty Boy Detectives look even slicker than your average Uta No Prince Sama. (I’m assuming they’re all called that).

These aesthetics aren’t necessarily bad, especially when Akiyuki Shinbo is bringing more than pretty boys to the television: He pairs the Pretty Boy Detective Club with all sorts of gorgeous imagery, as one would expect coming from the director of Monogatari and Madoka. Compared to the former, Pretty Boy Detective Club Episode 1 at least relies less on capital G capital D ‘Graphic Design’ aesthetics and more on conventional but especially picturesque and sparkling background imagery.

The leader of the Detective Club, Manabu Sotonin, proudly extols the virtues of beauty and Shaft’s seemed to have created a visual world that reflects its wonders. Also typical of Shinbo but always welcome, especially in today’s streamlined anime landscape, we do get one scene in this first episode that plays with an entirely different animation style, drawn-up via breathe-taking colored-pencil sketch work.

Finally, the actual ‘animation quality’, while not completely blowing minds, remains fluid and detailed throughout.

Despite some standout visuals, nothing in Pretty Boy Detective Club Episode 1 feels particularly new or shocking. Part of that is because it is, intentionally or not, rehashing Ouran High Schol Host Club territory, but perhaps that Episode 1 is the first of a two0parter also means better’s yet to come.

You get a couple of small moments where some more subversive dialogue via Mayumi’s skepticism makes its way into the script, something people’ve come to want from Nisio Isin, but these assured observations get immediately quashed by inspired pretty-boy rambling time and again.

Additionally, despite aping 2005 anime, the show fawning fetishistically over a young teenage boy’s legs explicitly (something Monogatari’s also guilty of) doesn’t feel too good in 2021. We should have some faith though, as Monogatari’s not what it appears on the surface either, and knowing the author, we’ll see some twists and turns sooner rather than later.

You can watch Pretty Boy Detective Club Episode 1 on Funimation.