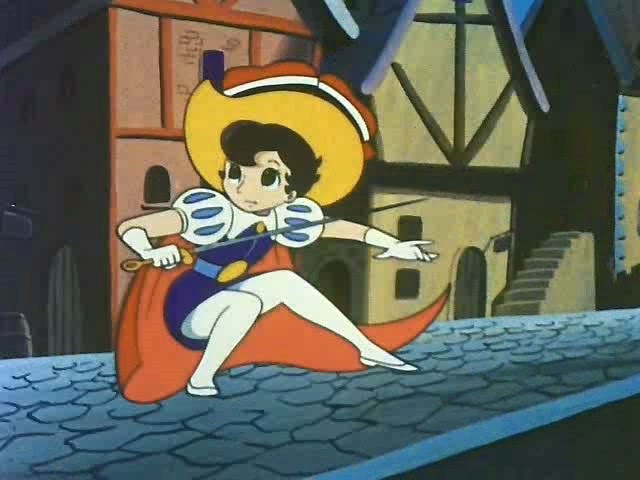 A princess is born with two hearts, one male and one female, in Osamu Tezuka’s  Princess Knight.

With a heroine who goes on adventures and can fight for herself, Princess Knight was a revolutionary story at the time.

At the time, Disney was still writing stories about princesses who needed to be rescued by the prince — Snow White and the Seven Dwarfs (1937), Cinderella (1950) and Sleeping Beauty (1959).

(They wouldn’t create another fairytale princess film until The Little Mermaid in 1989.)

In Japan, the 1950s and 1960s anime was largely dominated by stories for boys, or at least stories with male protagonists. Astro Boy, Gigantor, Kimba the White Lion, Cyborg 009, Osomatsu-Kun, Speed Racer, and GeGeGe no Kitaro are still remembered (and in some cases, they were brought back).

Princess Knight was one of the first shojo manga and anime shows ever created. As such, it helped pave the way for everything from Cardcaptor Sakura to Sailor Moon to Fruits Basket.

(This is similar to the Japanese Imperial Family, where succession is currently limited to male children.)

At the beginning of the series, the queen has just given birth to a daughter, Sapphire.  The queen can’t conceive any more children, so there are no second chances for a direct-line male heir.

Without a royal son, the throne would go to the evil Duke Duralumin and his dud of a son, Plastic. The king wants to avoid this at all costs. So he decides that Sapphire will be disguised as a prince.

Luckily for the king, the young princess has accidentally been given a male heart and a female heart. The clumsy angel responsible for this mix-up is sent to Earth to help him/ her.

Sapphire is raised as a boy. The duke still suspects that the prince must actually be a princess, so she has to keep pretending to be a boy in public.

(Frankly, her male disguise would look very feminine if presented in a modern setting, with her big poofy Snow White-esque sleeves, form-fitting tights and big hearts on her Three Musketeers-style hat. But it seems to fool the medieval kingdom.)

The “prince” has various adventures. He/ she also attracts the attention of a young prince, Franz. (Or Prince Frank in the English-language dubbed version from 1970.)

Sapphire still finds time to do female activities in secret. She even finds time to dress like a girl sometimes. (Unlike some shojo heroines, she doesn’t transform. She gets some help with her outfit.)

If Sapphire’s male version is vaguely androgynous, her female version sometimes goes into full Disney mode with a pink princess dress and a wig.

Franz/ Frank knows Sapphire as several separate people — Prince Sapphire and a mysterious, unknown princess are just two of them.

As if two identities weren’t confusing enough, she even gains another secret identity — a masked crimefighter.

Throughout the series, new villains get introduced, and the future of the kingdom is always under threat.

There’s also Hecate, the daughter of Satan.  (Or she could be the creation of a witch. Her story varies, depending upon the manga or the anime.)

Hecate rebels against her evil origin to help Sapphire.  Hecate is a magical shape-shifter who can change from a blonde woman to a cat and back.

In the end, good triumphs over evil, although there are some unexpected twists. As it turns out, Plastic isn’t as evil as his father.  And, the “girls can’t inherit the throne” law gets chucked.

Sapphire gets a Happily Ever After ending — she marries Franz/ Frank in the end.

Critics disagree about Princess Knight’s place in the history of modern feminism.

On the one hand, the series features a swashbuckling princess. Sapphire does not meet typical princess expectations. The series explores traditional gender roles.

On the other hand, some have pointed out that the series does retain some gender stereotypes. Sapphire’s female heart is weaker than her male heart.

Other critics have attempted to split the difference — Princess Knight is not perfect as feminist literature, but it’s not bad for the time.

Osamu Tezuka created Princess Knight as a manga in 1953.

The Twin Knights continued the story in 1958. The manga is a sequel that features Sapphire’s daughter, Princess Violetta.  Like her mother, Violetta crossdresses. In Violetta’s case, she does it in order to hide the fact that her brother, Prince Daisy, has gone missing.

The fourth version was a science-fiction story. Details about this less-popular part of the franchise are difficult to find. Apparently, this version of the manga features one of Princess Sapphire’s descendants, living in 2440. He uses a time machine to travel back to Sapphire’s time.

In 2008, a new version of the Princess Knight story was created.  This version by Natsuko Takahashi and Pink Hanamori was called Sapphire: Princess Knight.

Another remake of Princess Knight started in 2013. Both the 2008 and 2013 versions of the manga give Sapphire a new look in the style of modern manga art.

The 2013 version was created for the 60th anniversary of the original manga by Osamu Tezuka. Tezuka died in 1989.

The 1970 English-dubbed version of Princess Knight is available to watch at Crunchyroll.