Why We Still Love Princess Mononoke and Its Characters 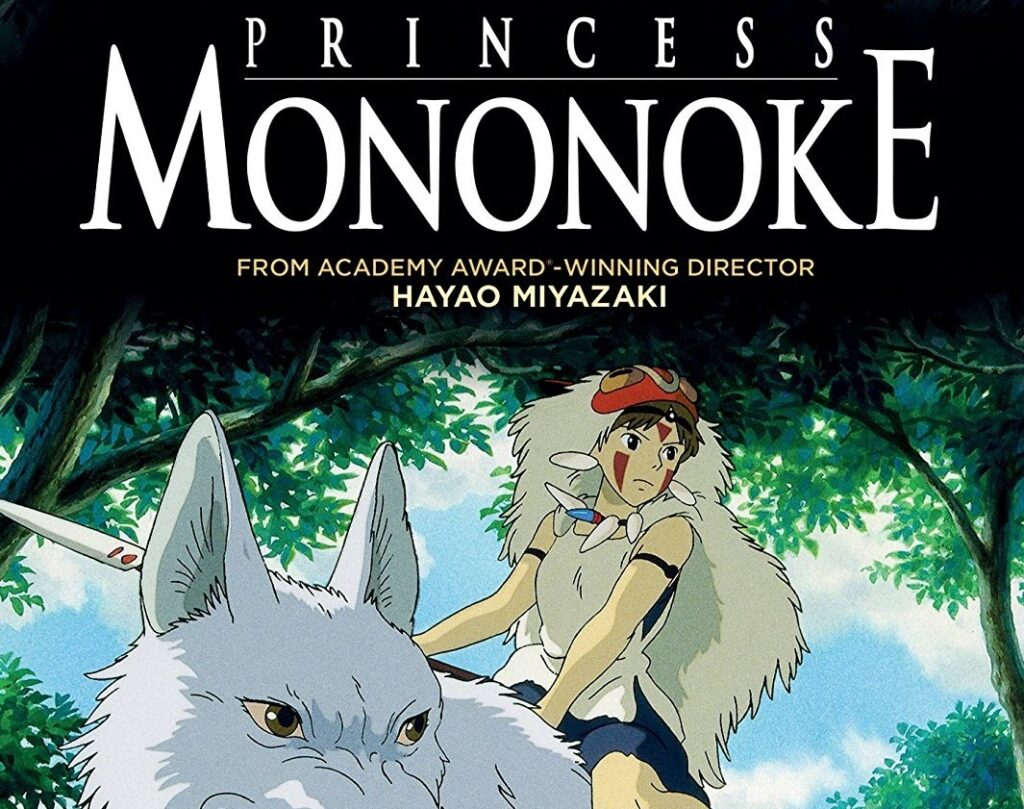 Princess Mononoke is, to this day, one of Studio Ghibli’s most popular films. The themes of environmentalism and humanity are still ones we grapple with. Ashitaka, San, Lady Eboshi, and all of the other characters are still regularly cosplayed at conventions. And there are countless sellers online of San’s mask, both in its usual form for cosplay and as a new face mask for going outside during the COVID-19 pandemic.

So what is it about this particular film that has made it withstand the test of time?

What Is Princess Mononoke About? Is She The Main Character?

Princess Mononoke follows Ashitaka, an Emishi prince, who has been cursed. He has superhuman strength, but the curse will eventually kill him. He leaves his home forever and sets off to find a cure.

As Ashitaka travels, he meets the opportunistic Jigo, who tells him he may find help in curing his curse from the Great Forest Spirit. Ashitaka starts to seek out the Forest Spirit, but comes across two injured men from the nearby Irontown.

The men had been injured after an attack from the wolf goddess Moro. Riding one of the wolves is San, a human girl who had been abandoned by her parents and raised by Moro. They are in conflict with Irontown and its leader, Lady Eboshi, because she has been clearcutting the forest in order to mine and produce iron.

Ashitaka takes the two men home and learns about the town from Eboshi. She tells him that her practices have gotten her into conflict with the forest gods and a local daimyo, Lord Asano. But she also tells him about how the town is a refuge for social outcasts, like prostitutes and lepers.

Additionally, Eboshi tells him that she intends to kill the Forest Spirit because she heard that his blood can cure anything. She says that it will turn San fully human again, and she is the one to call San ‘Princess Mononoke.’

San infiltrates Irontown in order to kill Eboshi, but Ashitaka intervenes and knocks them both unconscious. He takes San back to the forest, but on his way is unintentionally wounded by one of the villagers. The strength he has from the curse allows him to get San out of the town.

When San awakens in the forest, she intends to kill Ashitaka, but he charms her. She saves him from an ape clan that wants to claim him. And after the Forest Spirit saves his life, and she learns about his home from his own animal companion, a red elk named Yakul, they begin to truly bond. San even helps Ashitaka eat when he’s too weak to chew.

They encounter a boar clan, led by the blind boar god Okkoto, who intend to attack Irontown in order to save the forest. Moro insists that they will be slaughtered if they do so, but the boar decide to go ahead with it, anyway.

Meanwhile, back in Irontown, Eboshi is getting ready for battle, Jigo by her side, so she can go kill the Forest Spirit. She’s hoping to give the Forest Spirit’s head to the emperor in exchange for protection from Lord Asano. 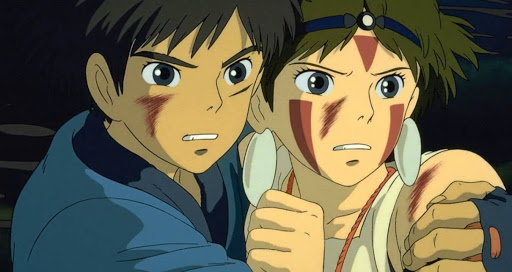 Ashitaka recovers from his wound, and Moro insists that he leaves the forest. The boar clan is destroyed in battle with the humans at Irontown, and in fear and pain, Okkoto becomes a demon. San tries to stop him and becomes trapped. Moro intervenes, but the Forest Spirit kills both Okkoto and Moro so San can be saved.

While the Forest Spirit is distracted, Eboshi decapitates it. It starts to bleed a black ooze that destroys everything in its path while it looks for its head, which Jigo has stolen. Ashitaka and San pursue him, and fight him for the head. Victorious, they bring it back to the Forest Spirit.

Complete once again, the Forest Spirit dies, but its form washes over everything, allowing plants to bloom where Eboshi had clear-cut the forest and curing Ashitaka’s curse.

Ashitaka stays in Irontown to help rebuild while San returns to the forest with the wolves. But they promise to always stay connected, to visit when they can, and San admits that she loves him. Eboshi vows to rebuild a better town. The forest begins to regrow, and a kodama emerges from the undergrowth.

Literally, Who Is Princess Mononoke? (and Everyone Else?)

One of the most admired parts of Princess Mononoke is how three dimensional all of the characters are, and how they each have their own point of view based on life experience. Here’s who the main and secondary characters are, and where they psychologically come from.

Why Does San Wear a Mask? 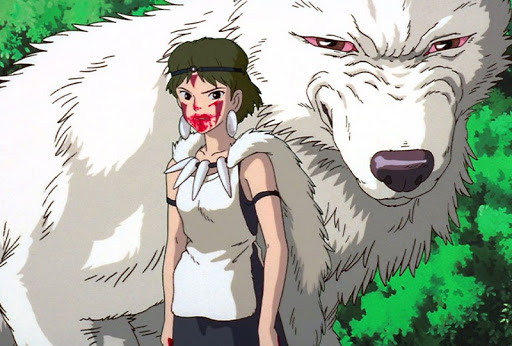 One of San’s most defining features is the mask that she wears. Masks come up a lot in Japanese culture and history. They’re used in Japanese theater, festivals, and rituals, and often represent gods or spirits.

Even though San is technically human, the mask that she wears proves that she’s deeply spirit-like in her connection to the animals and gods of the forest in which she lives. With her status as both a human girl and a representative of the inhabitants of the forest, she’s something else, making her almost magical.

It also ties into the literal translation of the Japanese title, Mononoke-hime, which means spirit princess. A more precise title for the film might have been Princess of the Spirits, which would clarify why she, a human, gets to wear the mask and how she is connected to the spirits of the forest.

In her role, she’s able to affect real change in the area and fight for the climate. The fact that the mask is one of her defining features is no accident. It’s a symbol of her otherness. But more than that, it creates a feeling of the extraordinary, endowing the viewer with the feeling that, if we were to put it on, we could fight for the environment just as hard.

What Do All of the Other Characters In Princess Mononoke Represent?

If San is environmentalism, then Lady Eboshi’s character is pretty clearly the face of humanity, technology, and how that means both progress and destruction. She’s not necessarily evil, but she’s short-sighted and only focuses on what benefits her and the people in her town.

The character of the Forest Spirit is nature itself. It can be healing or harmful depending on how you treat it. More beneficial than malicious, but not a spirit to be trifled with, it is also the difference between life and death in all creatures.

Finally, what about the main character, Ashitaka? He’s not just a guide for the viewer into the film, he represents balance. Although he has to fight for himself and his own survival as a human, he doesn’t want to hurt anyone in the forest or in Irontown. He ends up being the compromising figure between San in the forest and Eboshi in the settlement, proving that there’s room for both humans and nature to co-exist with respect.

What Is The Impact of Princess Mononoke?

Like many of the Studio Ghibli films, Princess Mononoke is considered to be an anime classic, and therefore is permanently popular. You can never go wrong cosplaying any of the characters in Princess Mononoke to a convention, and it’s easy to reference when speaking to anyone about film, even if they aren’t into Japanese culture.

Princess Mononoke has enjoyed a wide array of accolades, including being the first animated film to win the Japan Academy Prize for Best Picture.

It broke box office records when it first came out in Japan. So it was brought back for countless screenings in 2017 for the twenty-year anniversary of its release. When it was done, it was also the first-time director Hayao Miyazaki announced his retirement.

He, of course, would break that retirement just a few years later to create Spirited Away, and is once again out of retirement working on short films and the Studio Ghibli Museum.

In most of the world, audiences can watch Princess Mononoke, along with much of the rest of the Studio Ghibli catalogue, on Netflix as part of their subscription. The exception, however, is in the US, Canada, and Japan. But the films will be available on HBO Max in the US when it launches on May 27th!