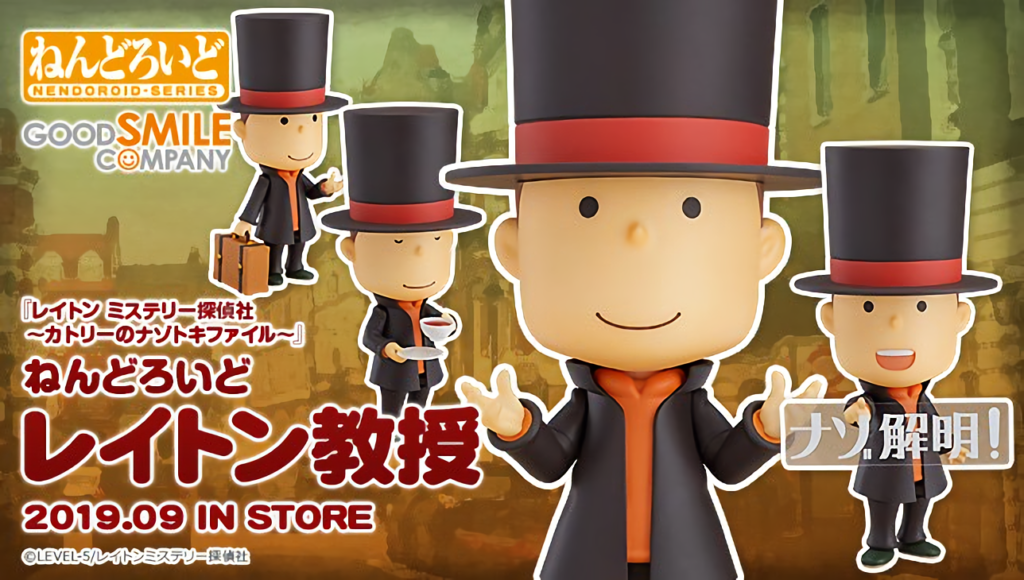 Professor Layton, the top hat-wearing British gentleman who can’t help but think about a good puzzle, has been recreated as a figure in the past. Kaiyodo released a Revoltech figure based on his design all the way back in 2010, a fully-posable scaled model of the character. However, up until now, he hasn’t seen himself recreated as a Nendoroid. Ever since its announcement at Wonder Festival Summer 2018, fans have been excited to get their hands on a brand new Nendoroid series figure for Hershal Layton, with those eager fans now able to pre-order the figure through Good Smile Company’s official website.

This version of Professor Layton is based on the character as they appear in the Layton’s Mystery Detective Agency anime series which is currently airing in Japan, it itself an adaptation of the Layton’s Mystery Journey: Katrielle and the Millionaires’ Conspiracy video game developed by Level-5 in 2017. This Nendoroid includes 3 different face plates for Layton featuring a standard expression, a smiling expression as well as an expression where his eyes are closed.

Where would a British gentleman be without his tea? Luckily, Good Smile realized this and bundled the character with his own tea set as well as his trunk of belongings. Not only that, a Japanese “puzzle solved” faceplate is included. To completely recreate the scene of completing a puzzle, pointed arm sculpts are included alongside the standard open hand sculpts and gripping sculpts in order to hold and drink his tea effectively.

This Nendoroid will come in at a cost of 4,800 yen, with pre-orders having opened on the Good Smile Company website. These pre-orders will then be left open for the next month until February 28 at 12 pm JST. A tentative release date for the figure is currently set for September 2019, meaning there’s still a bit of time left to wait until it’s available to the public.

Who knows, in the meantime, you may be able to work through a few puzzles. After all, a true gentleman leaves no puzzle unturned.