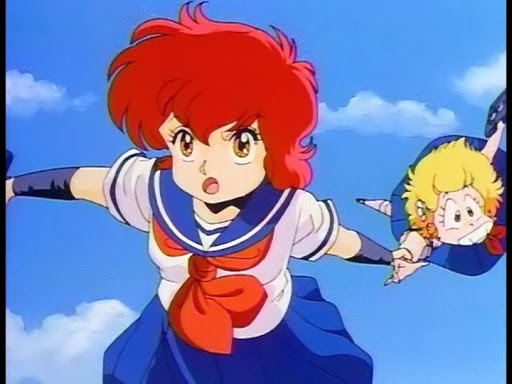 Project A-Ko is an anime about a sailor-suited schoolgirl heroine with superpowers.

No, not that one. There’s no transformation sequence or anything magical like that. This actually came out a couple of years before Sailor Moon.

Let’s start over. Project A-Ko is a 1986 anime film. It’s a goofy mixture of science fiction and slapstick comedy. It’s a ton of fun to watch and full of energy. And the soundtrack is pretty good.

The film makes fun of a lot of high school anime cliches and science-fiction anime tropes. On the one hand, we have aliens, giant robots, space battleships, and lots of cool explosions. The story involves the old Star Wars routine of rescuing a kidnapped space princess.

On the other hand, we have a lot of typical high school comedy bits featuring the three main teen girl characters: A-Ko, B-Ko, and C-Ko.

Viewers should be advised that there are also some dirty jokes and some fan service. There are some panty shots, which aren’t all that surprising considering the amount of active movement that A-Ko does in a skirt. That includes a scene where A-Ko falls from the sky and lands on the bubble canopy of a fighter jet. The pilot likes the view that he gets. 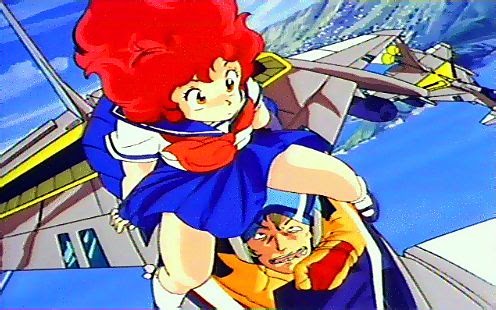 That scene gets shortened, although not cut entirely, in the edited-for-TV version. Other scenes in the original Japanese version, such as A-Ko putting on a bra while getting dressed for school in the morning, also get censored.

After a downer opening in which all of Graviton City is destroyed, the film switches very quickly to high-energy high-school comedy.

We’ve all seen that one funny anime scene where the girl is late to school and has to book it to make it on time.

Project A-Ko features a version of that scene, except that A-Ko has super strength and super speed. She races to Graviton High School with a crazy mixture of running at impossible speeds and jumping across rooftops.

C-Ko is dragged along behind her. It’s not so much being dragged as it is flying through the air at high speed. (C-Ko must have at least one superpower to avoid getting her arm pulled off.)

When you consider that scene, it’s not entirely clear at first what A-Ko actually is. Science-fiction anime will often include humanoid robots, cyborgs, and other bionic characters, so maybe A-Ko is…?

Eventually, we learn that A-Ko apparently has some unexpected, famous American parents. For now, the movie doesn’t bother to explain where she got her powers. There’s no time to waste before moving on to the next gag.

What we do learn is that A-Ko is a cute redhead teen. She has some of the fiery redhead personality-type. 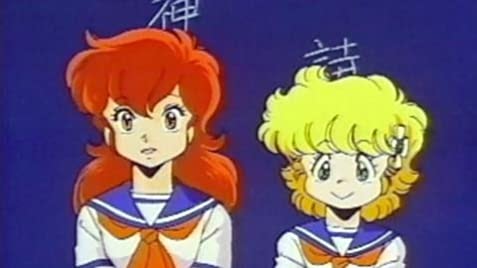 A-Ko and C-Ko are best friends. C-Ko is a lot more airheaded than A-Ko. The animation gives her a lot of cartoonish expressions that fit her ditzy personality. We also learn that C-ko can’t cook.

B-Ko is the rich, spoiled, and stuck-up character. For English-speaking viewers, it would be easy to assume that the ‘B’ in B-ko stands for ‘bitch.’ However, it doesn’t translate that way in Japanese.

There is also a villain named ‘D,’ and in one of the sequels, a male character named Kei (K) is introduced.

Note that A-Ko is ‘Eiko,’ and C-Ko is pronounced ‘Shiiko’ in Japanese. The girls’ names would be normal-sounding in Japan.

Not that it really matters to the plot of the first film, but they are officially Eiko (A-Ko) Magami, Biko (B-Ko) Daitokuji, and Shiiko (C-Ko) Kotobuki. The Daitokuji family does play an important role in the first sequel.

The first half of the movie is basically high school student shenanigans, taken up to 11 because of A-Ko and B-Ko’s powers and abilities.

There are some fights and arguments. B-Ko is jealous of A-Ko and wants C-Ko for herself. B-Ko has her own schoolgirl gang, including one very muscular, masculine girl. B-Ko also has a giant, Gundam-style robot.

The main plot is hidden in the background at first. The girls are being spied upon, but the villains wait until the moment is right to make their move.

The story shifts somewhat after C-Ko gets abducted by aliens. It seems that C-Ko is actually a lost princess of the Lepton Kingdom of Alpha Cygni. The rivalry between A-Ko and B-ko gets (mostly) set aside as they try to rescue her.

The action switches to science fiction. Even then, it’s pretty comical. The whole film uses a lot of cartoon logic, and that doesn’t stop even when the good guys are fighting the aliens.

The aliens are all women, although they are of the muscular, masculine variety that we saw with B-Ko’s gang earlier.

In the end, B-Ko rescues C-Ko, but she can’t overcome her need to fight A-Ko. A-Ko and C-ko end up back together again on Earth. Life returns to (sorta) normal.

No Manga for You

It’s worth noting that Project A-Ko is not based on a manga or a light novel. There is no television anime series either before or after the movie.

Fans who vaguely remember the movie, but haven’t seen it in a while, may be confused by this. The movie itself often feels like a very long anime episode, especially given the style of the animation. The jokes and gags also help it feel more like a TV show.

However, there are a couple of sequels to the original movie.

The first Original Video Anime sequel is called Project A-Ko 2: Plot of the Daitokuji Financial Group. The Daitokuji in the title is B-Ko Daitokuji’s family.

The plot of the 1987 film is very similar to the first. A-Ko and B-Ko are still rivals. B-Ko is still obsessed with C-Ko.

B-Ko helps the aliens from the first film. They were stranded on Earth at the end of the last one, and they need help to repair their spaceship.

There is more schoolgirl silliness, and this time the plot revolves around an alien ship and alien technology.

The story takes place during a break from school. B-Ko seems to still want to win C-Ko over, and C-Ko wants to have fun.

But A-Ko wants a boyfriend. The presumptive boyfriend is Kei. There are some love triangles, or possibly a love quadrangle. A-Ko wants Kei. B-Ko also wants Kei. C-Ko doesn’t want Kei, but she wants A-Ko to stay with her.

A-Ko and B-Ko fight and the fight is epic and destructive.

This was followed by Project A-Ko 4: FINAL in 1989. Kei is scheduled to marry A-Ko’s teacher, Miss Ayumi. The Alpha Cygnan aliens try to stop the wedding.

This version is very different from the other movies. It’s an alternate universe story. The characters are out in space, rather than schoolgirls.

A-Ko and B-Ko are bounty hunters. C-Ko isn’t a space princess this time, but the daughter of an executive. C-Ko still gets kidnapped. A-Ko and B-Ko battle, as usual.

Since 1990, no official remake or update of the original story has been made. There has been no news about any future new content, either.

That hasn’t stopped anime fans from speculating about future projects. If you run across any, be cautious about rumors, and always consider the source.

Other Thoughts, History, and Availability

Project A-Ko parodied the anime which came before it, but it may have also foreshadowed what came after it.

The schoolgirl battles between A-Ko and B-Ko also have parallels in Kill La Kill. In this comparison, A-Ko is Ryuko and B-Ko would be Satsuki.

In many ways, C-Ko resembles Mako Mankanshoku. She’s a cute, bubbly schoolgirl who hangs around the hero.

Project A-Ko was originally produced by the animation studio A.P.P.P., or Another Push Pin Planning. The company’s other productions include Omishi Magical Theater: Risky Safety, Cream Lemon, Fist of the Blue Sky, JoJo’s Bizarre Adenture, Golden Boy and Fist of the North Star: Legend of Toki. Soeishinsha was also involved in the production.

It was brought to the United States by licensor Central Park Media in 1991. It was the company’s first video release. Central Park Media would go on to release Slayers, Patlabor, the Captain Harlock Saga, Birdy the Mighty, Gall Force, Irresponsible Captain Tylor and many others.

Project A-Ko is available to rent on Amazon Prime. You can also get a DVD box set, but there is no Blu-ray edition.

The Project A-Ko Original Soundtrack is available at Amazon. It includes a lot of upbeat 80s electronic music. It also features ‘In Your Eyes,’ sung by Samantha Newark, the voice for Jem from Jem and the Holograms. (Note: Even though they both came out in 1986, this is not the same as the Peter Gabriel song.)