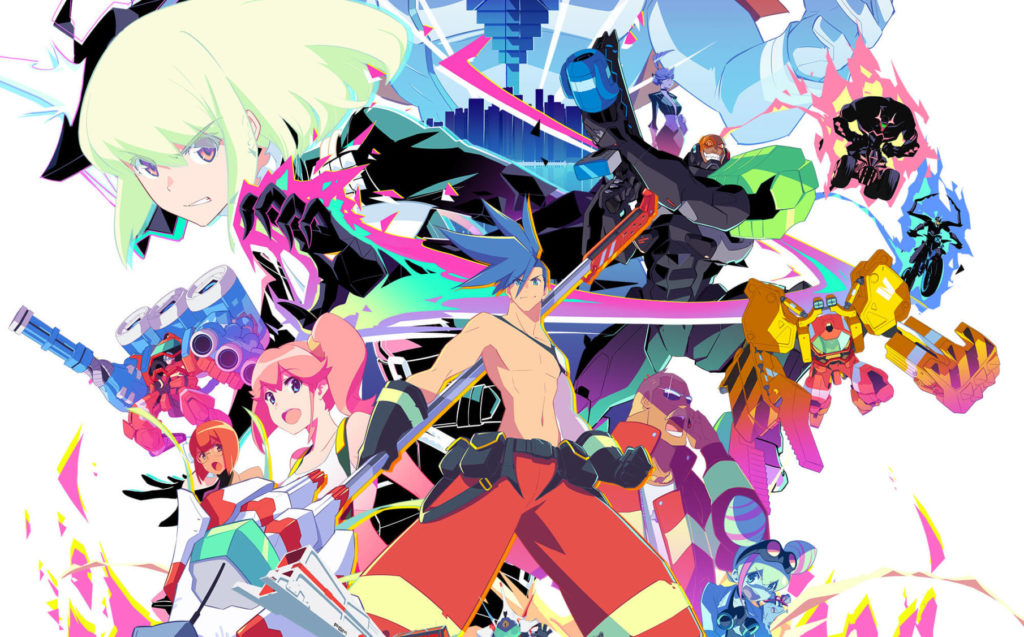 In many ways, PROMARE is the spiritual successor to Tengen Toppa Gurren Lagann and Kill la Kill. Serving as the third collaborative project between Studio TRIGGER’s inhouse director Hiroyuki Imaishi and revered screenwriter Kazuki Nakashima, Promare is TRIGGER’s very first feature-length film. With Hiroyuki Sawano returning to compose the soundtrack once again, the film had a lot to live up to.

Considering the immense undertaking that is a feature-length film, TRIGGER certainly did not hold back for the Imaishi and Nakashima’s reunion. Giving the immensely talented Shigeto Koyama his very first lead design role, PROMARE carries an astonishingly vibrant and polished aesthetic while not losing a single touch of TRIGGER’s personality.

One major trick that TRIGGER had up their sleeves for PROMARE was the film’s trademark self-colored lines. Matching the outlines to hair, skin tone, uniform, and whatever else necessary, the only time we’ve seen this done at such a large scale is in PROMARE. Drastically setting it apart from other Japanese animation, this technique is only really possible in film production as it costs three times the amount of the work during the composting process.

In the wake of Gurren Lagann and Kill la Kill

PROMARE certainly has no shortage of reference to other projects the team has worked on. With the bombastic in-world screen, titling passed down from Kill la Kill, as well as two major transformation scenes resembling those from Kill la Kill and Gurren Lagann respectively, there’s hardly a single scene that doesn’t draw from TRIGGER’s rich heritage of trademark moments.

It wouldn’t be an Imashi and Nakashima collaboration without a drill shaped object and glowing green energy slipped in somewhere.

The Gurren Lagann Spin Off that Fans always Wanted

Looking past the visual references, the narrative of PROMARE draws a lot from Gurren Lagann. Set in a world havocked by a sudden outbreak in BURNISH mutations decades earlier, the story revives the coveted Kamina vs Viral subplot with Galo Thymos closely resembling Kamina and Lio Fiota taking over for Viral.

The one major difference is that their place in society is flipped around, with Galo serving PROMARE’s equivalent of the spiral king, the utilitarian Kray Foresight, and Lio leading the subjugated group of humans possessing volatile and dangerous powers.

Having something to say about the world today

While Kill la Kill and Gurren Lagann have both heavily focused around toppling oppressive regimes, PROMARE is the first Imashi Nakashima work that really relates it back to today’s political struggles. The Freeze Force resembles something akin to ICE in the United States, apprehending honest and hard-working BURNISH solely for their status as a second class citizen.

The blond-haired billionaire leader of the free world also has more personality flaws and inconsistencies compared to his counterparts in Kill la Kill and Gurren Lagann, who are all either maniacally evil or of the orthodox utilitarian type. Dare I say, this more closely resembles issues existing in the world today.

Beyond the eye-catching character designs by Shigeto Koyama himself, every PROMARE character is also unique in the personality. Here is the rundown of some of the main characters.

Galo is essentially Kamina 2.0. A hotheaded, brash, and emotionally driven, he follows what his heart tells him to do. Originally becoming a firefighter in his admiration for the renowned Kray Foresight, he is subservient to the system for which he extinguishes fires and eliminates BURNISH threats.

Awarded with the highest honors after apprehending MAD BURNISH leader Lio Fiota, life seemed to be exceptional for Galo. After an unlikely series of events, Galo starts to question his loyalty and the state’s treatment of the BURNISH, eventually setting to seek out the truth behind it all.

Lio is the infamous leader of the MAD BURNISH. Regarded as one of the most powerful of his kind, he fights with the fate of the BURNISH in his hands. Never fighting people without a reason, Lio prides himself in keeping casualties as low as possible for both sides. His constant clashing with Galo exposes a big difference in their philosophies, while Lio’s missions mean life or death for his kind Galo naively fights out of pride and admiration for his leader.

Kray is the blonde billionaire president of Promepolis and revolutionary scientist. He lays claim to some of the inventions that restored order to the world, as well as being the man who saved Galo from certain fiery death in his earlier years. Outwardly appearing humble, the nature of the state he rules hints at something a little more dubious.

PROMARE’s Availability in Japan and the United States

At the time of writing, PROMARE has already completed the bulk of its cinematic runs. With a Japanese home release slated for the 5th of February 2020, there has been no information released regarding when the rest of the world will see a Blu-ray or DVD release.