Protect the Sweet: What’s the Deal With the Anime My Love Story!!? 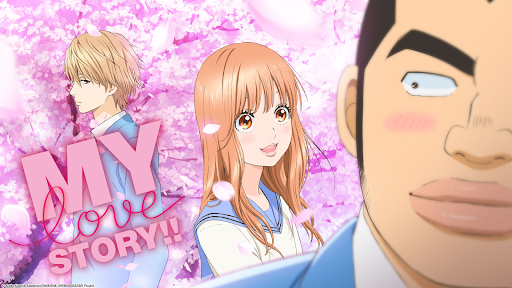 There’s an art to making a good romantic comedy.

I know rom-coms have a reputation for being gimmicky, repetitive, or straight up silly, but nothing can stop them from being good old-fashioned fun.

On the other hand, a well-written movie or television series can bring attention to issues of identity and sexism and different power dynamics within platonic and romantic relationships (and oftentimes, a bit of both) alike.

Not that there’s anything wrong with having a gimmick in the first place. That’s how you get people interested in what you have to offer, after all.

In the spirit of predecessors like Lovely Complex (a slow burn between a self-conscious short boy and tall girl) and Toradora! (a story where two classmates/next-door neighbors make a pact to wingman for each other), the rom-com My Love Story!! balances its cute premise with thoughtful insights into young love.

My Love Story!! happens to be one of those series I had the pleasure of watching with a friend, both of us hungry for more saccharine shenanigans every week.

So, what makes this show worth a watch? What makes it work?

Well, My Love Story!! fully embraces its charming gimmick for one!

And as if the odd couple ‘hook’ of the show wasn’t enticing enough, the core friendship and side characters are also privy to lives and stories of their own. 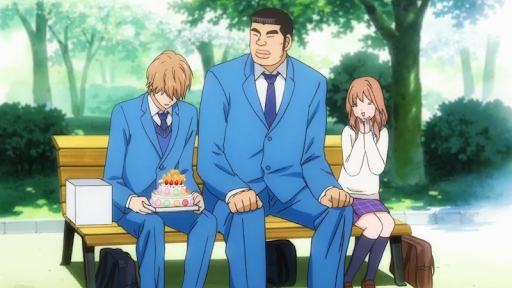 What Is My Love Story!!?

Kazune Kawahara’s cute manga-turned-anime series My Love Story!! was overseen by Madhouse, the studio behind Satoshi Kon and Mamoru Hosoda’s films, in 2015.

The story begins with our high school protagonist Takeo Gōda being denied his chance at a long anticipated love confession…for the upteenth time.

Despite Takeo being popular among his fellow guys thanks to his strength, his imposing build, bold personality, and unconventional face often drive girls away.

Takeo’s best friend since childhood, Makoto ‘Suna’ Sunakawa, on the other hand, has the pretty boy looks expected of a rom-com character. With that said, Takeo and Suna’s dynamic tends to ride on the former’s crushes falling for the latter instead.

That is, until the sweeter-than-sweet Rinko Yamato enters Takeo’s life.

And by ‘enters,’ I mean, Takeo swoops in to save her from a harasser on a train.

My Love Story!! doesn’t waste time forgoing a potential love triangle to push Takeo and Yamato together. Rather than fixate on ‘what-ifs’ and ‘will they, won’t they’ scenarios, a majority of the show is about them dating.

But as mentioned before, the show also devotes episodes to Takeo, Yamato, and even Suna’s individual problems.

I adore Takeo. He’s easily on par with ‘delinquent’ Ryuuji Takasu from Toradora! as far as well written male leads in rom-coms go.

Yeah, he may not be as ‘pretty’ as Suna, but it’s impossible not to root for the guy. You want Takeo to find a nice love life in a nice gal.

Takeo’s so full of life, and ultimately, it is his kindness that wins Yamato’s heart.

While a lot of young male leads in anime tend to be on the dense and stubborn side, our Takeo has more than enough charm to compensate for this. I think it was a smart move on mangaka Kawahara’s part to subscribe Takeo’s denser moments to his long history of being rejected.

I suppose old habits die hard, even for good guys.

With baking expertise and magical-girl level determination under her belt, Yamato turns out to be just as wholesome a character as her boyfriend. Yamato’s got more going for her than how ‘pure’ she is though.

Takeo and Yamato both struggle with communicating their wants, the former deferring to assumption and the later trying not to be pushy.

With open communication and occasional words of wisdom from Suna, the pair usually works things out.

Speaking of Suna, his particular personality is one I’d like to see make a resurgence in future rom-coms.

Suna’s calculated and reserved, but far from uncaring. In fact, I’d argue his best friend’s happiness is one of his top priorities (to the point of having turned down every girl who ever spoke ill of Takeo). Unlike Takeo, Suna’s also framed as vaguely aromantic and/or asexual which I found intriguing.

Neither orientation gets much attention in media as a lack of romantic/sexual interest is often misconstrued as indecision, naiveté, or a ‘phase.’

For all of its innocence, My Love Story!! still treats Takeo and Yamato’s insecurities and wants with their share of narrative weight.

The desires expected of teens and young adults in love are very gendered in fiction and in real life.

While Takeo never fails to be considerate of his girlfriend’s boundaries, Yamato herself has trouble expressing her desire for physical intimacy (holding hands, kissing, etc.) as doing so isn’t considered ‘lady-like.’

In turn, the show explores self-respect and how the way we treat ourselves often bleeds into other aspects of our lives for better or for worse.