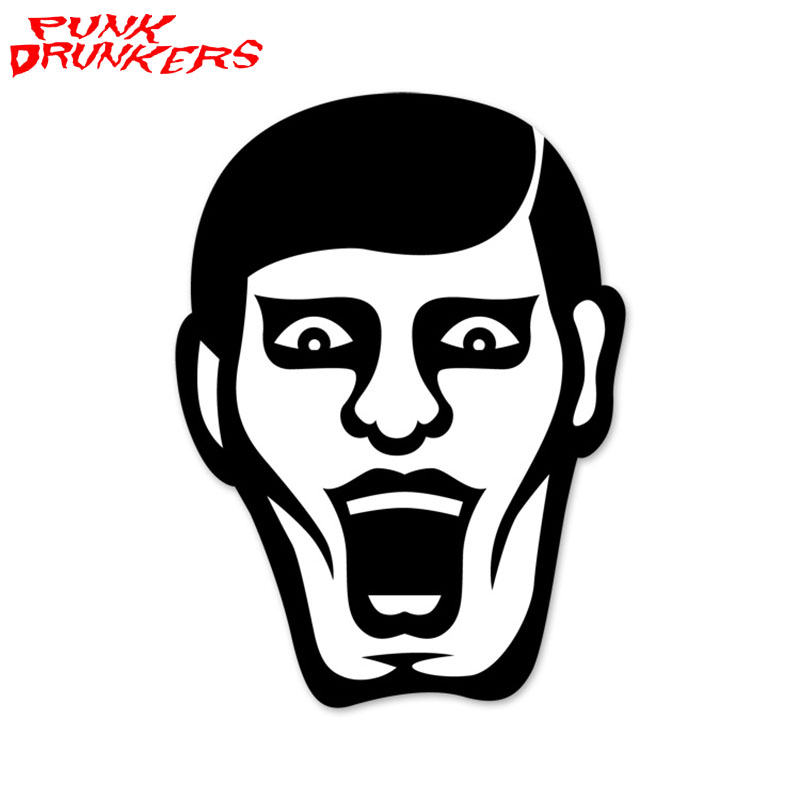 Sometimes it’s cool to be uncool. Some of the most remarkable people of all time have classified their childhood and adolescence self as being ‘uncool’, ‘different’ or just plain ‘weird.’ Ironically, the people we may have thought were so far from being cool that it was saddening, were actually living in the future of fashion.

Synonymous with ‘Dasai wa kakkoii’, Punk Drunkers’ most known character ‘Aitsu’ (him or that guy) is an awkward-looking figure, however, he looks the most awesome on a Punk Drunkers T-Shirt!

I am always enamored with fashion designs, especially the inspiration behind them. According to Punk Drunkers’ Chikayoshi Satomi: ‘I often come up with catchy names or words first and draw on them for designs. Collaborating with others helps, too. I also have a stockpile of illustrations, which I sometimes go through and pick for new T-shirt designs.’

One of the boldest punk rock T-shirts I have seen is Punk Drunkers x Devilman. A simple colored shirt with a logo similar to the batman symbol, enclosing the name ‘devilman,’ is one of Punk Drunkers’ signature creations. Most likely derived from the Japanese manga series ‘Devilman’, Punk Drunkers inserts otaku culture into the forefront of his brand.

As a person who loves accessories, whenever a brand has add-ons available purchase I like that brand double. Spooky yet eye-grabbing, Punk Drunkers’s Devilman clothing is one of the brand’s most popular features. Unlike many clothing lines, Punk Drunkers x Devilman also comes with a matching sofubi toy.

Punk Drunkers Sofubi Toys Are the Heart of the Brand

The basic concept of Punk Drunkers is intersecting fun Japanese artistry with westernized culture. Similar to action figures in the United States, Punk Drunkers’ sofubi toys are a staple within the Punk Drunkers’ brand.

Punk Drunkers’ sofubi (soft vinyl) pieces are diversely designed, created by artists from around the globe, hence the supreme individuality of each toy. One of the most identifiable characteristics of the Punk Drunkers brand is the Aitsu sofubi toy; showcased at the Parco Museum in Ikebukuro, Tokyo, Japan in 2019 for Punk Drunkers’s 20th-anniversary exhibition.

Most people who are a fan of Punk Drunkers’ sofubi line are superfans of Punk Drunkers’s Devilman mashup sofubi toy. A half-human, half-monster action figure that is the 3D version of the original devilman drawing is a must-have collectible.

Punk Drunkers’, aka PDS, also displays their renowned toys at their PDS Convict Play Studio. The Conflict Play Studio is practically the toy museum seen in the dreams of comic lovers and action toy enthusiasts.

In an article written in The Japan Times, Chikayoshi Satomi has said his fans are, ‘People who want things a little different, a little quirky.’ This summarizes the essence of Punk Drunkers. No two pieces are exactly alike despite the continuation of certain themes within the brand.

Punk Drunkers is a fun brand that incorporates childhood favorites like comic-like illustrations on backpacks; clothing, cartoon hook wallets, high socks, and overalls to signify that what may be classified as geekish during adolescence is actually trendsetting in the making.

There are many Punk Drunkers sofubi toys that are considered collectibles, and some can be purchased on various shopping websites. Punk Drunkers has recently launched their Summer collection, which includes some brand new things. According to the Punk Drunkers website, The long-awaited ‘Kamen Rider Amazon’ JKT and the currently on-air ‘Kamen Rider Zero One’ TEE and Ron TEE are in stock!