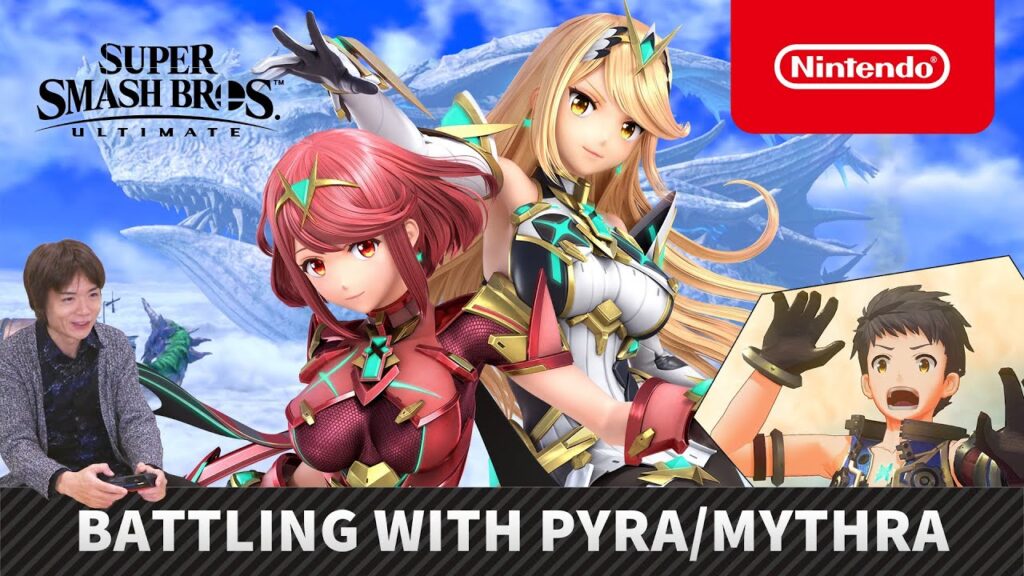 Revealed during a jam-packed February 2021 Nintendo Direct that also featured announcements for games like Splatoon 3 and Project Triangle Strategy, it was announced that the latest fighters coming to Super Smash Bros Ultimate would be Pyra/Mythra from Xenoblade Chronicles 2.

The reveal left us mostly in the dark on many of the characteristics of this latest DLC fighter, although we did learn that they would act as a dual fighter with the ability to switch between them to use their different movesets during battle, making for an exciting addition to the growing Smash roster.

Following this reveal, it was announced that Masahiro Sakurai would give one of his trademark deep dives into the fighter’s play-style and moveset in an extended livestream that took place today, which also confirmed the fighter’s release date.

With that, courtesy of Sakurai himself, this is everything you need to know regarding how to play as Pyra/Mythra in Super Smash Bros Ultimate.

Thanks to the new and ongoing Japanese state of emergency implemented to combat COVID-19, we’re back to home solo recordings with no one to laugh at Sakurai’s jokes, something the director seems genuinely disappointed about. Following was a quick introduction of Xenoblade Chronicles 2’s gameplay and story, particularly focused on the character of Pyra/Mythra and how they act as two personalities from within the same anthropomorphized blade.

The reveal kicked off with a discussion of the stage, as opposed to the fighters. The stage being added alongside Pyra/Mythra is called the Cloud Sea of Arlest, and is set, fittingly, above the Cloud Sea. The stage itself is set on top of ‘Gramps’, which is Rex’s flying home. This is a small, flat stage as a result, but it does have some dynamic elements, mainly involving Gramps’ head.

In the background of the stage, you’ll see various titans from Xenoblade Chronicles 2 wandering around the Cloud Sea, and occasionally Gramps will turn his head to look at them. This will reduce the size of this side of the stage alongside his head bobbing up and down throughout the battle, making it an awkward platform to recover to in these fights. Usually, these movements will be forewarned, so there’s no need to worry about being taken by surprise by any of this in the heat of the action.

In the background, you’ll receive support from various characters from the title who’ll dance and cheer along to the fights. It’s a nice way to feature secondary characters from the game, like Nia and Tora. Rex, meanwhile, will only appear at the start of a fight, when performing an up-taunt, and on the victory screen. There were initial considerations to make him fight alongside Pyra/Mythra, but the difficulties in introducing even a simple dual-fighter into Super Smash Bros Ultimate like Ice Climbers made this impossible. 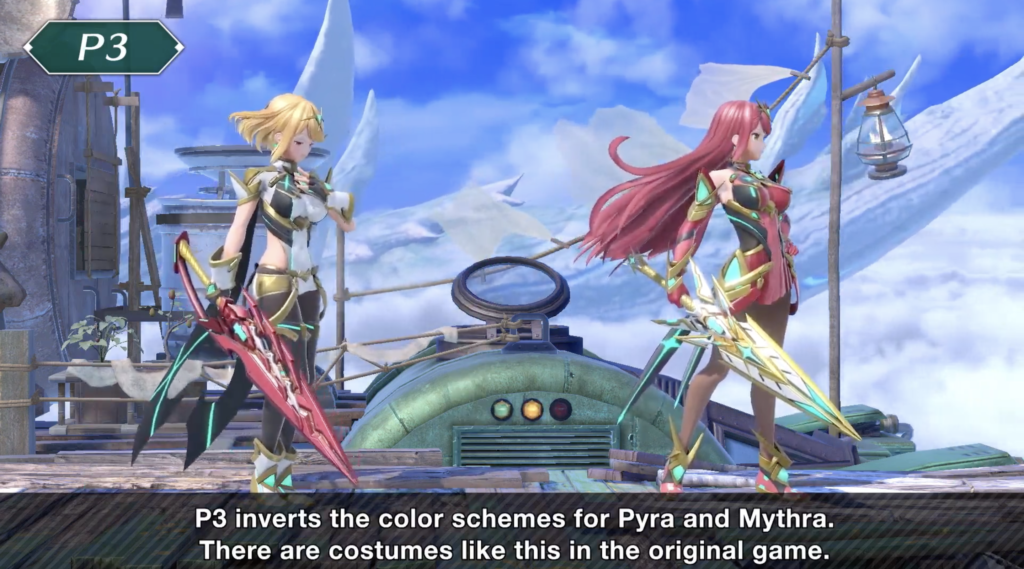 You can choose to start a battle in Smash Bros Ultimate as either Pyra or Mythra by pressing Y over the fighter in the character selection screen and can switch freely between each fighter by using a down special, similar to Zelda and Sheik in Super Smash Bros Melee.

Overall, these two fighters have many similarities, although Pyra’s moveset has an emphasis on power while Mythra emphasizes speed. Mythra will walk, run, and jump faster. The emphasis on power vs speed can be seen in Pyra’s powerful side-smash Flare Smash, or in Mythra’s Foresight, which reduces damage when you can dodge and creates a slowing effect that makes it easier to fire off a counterattack, similar to Bayonetta’s Bat Within. 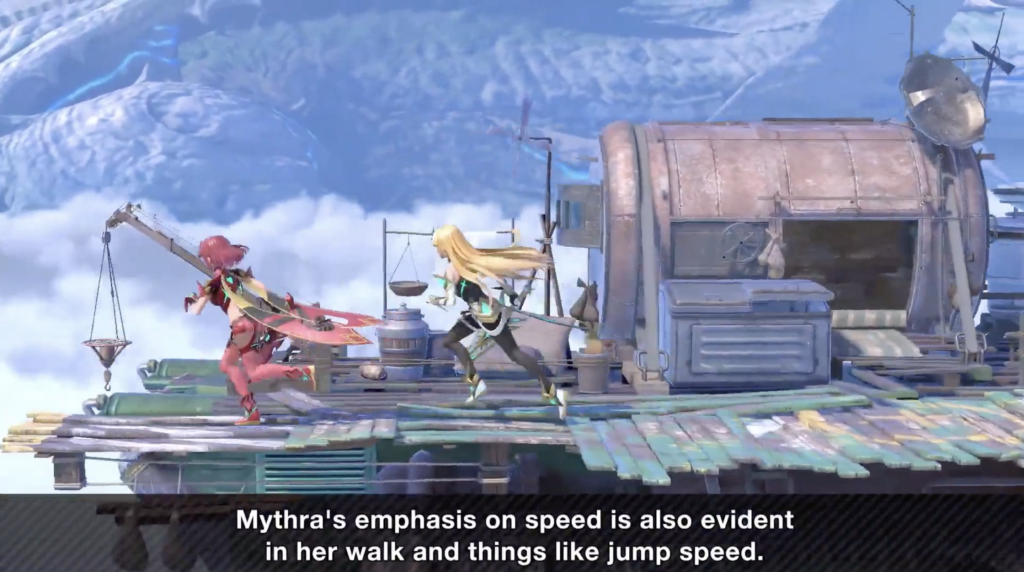 Otherwise, the basic smash attacks are similar, differing only in speed and power. For the base attack, for example, Pyra has noticeably more power and slightly more reach, but Mythra is noticeably faster, allowing you to react better and inflict more attacks.

The increased power of these attacks can make Pyra a more viable choice despite this (the basic attack does 13.8% damage from a neutral setting versus 6.6% for Mythra), but it’s still something to consider, especially when Mythra’s dash attack allows you to close gaps between fighters better and offers more versatility even if Pyra can KO with her power in this situation. 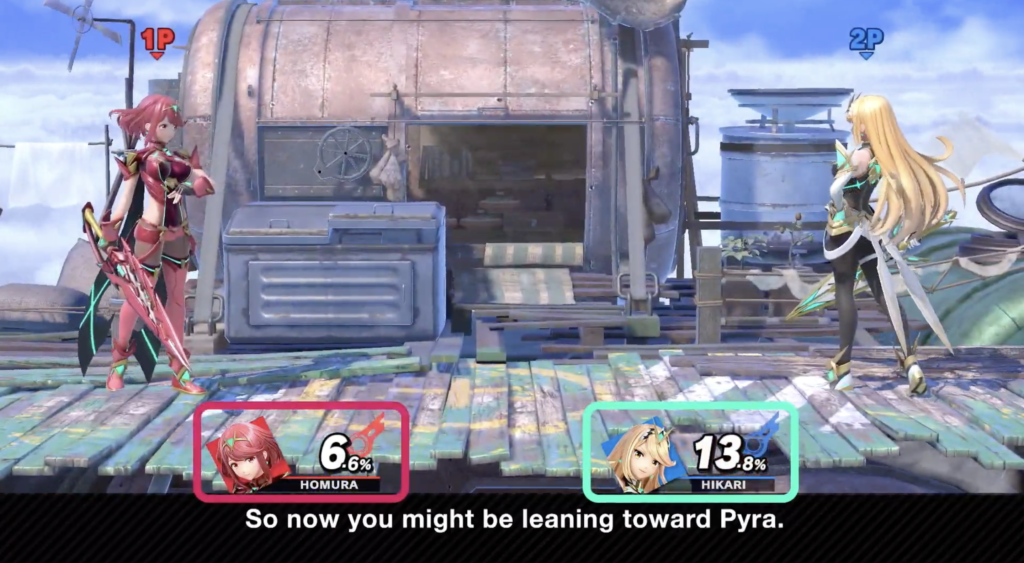 It can be seen most prominently in the tilt attacks. Mythra can instigate a flurry of attacks with her tilt that can effectively keep opponents at bay even if Pyra does more damage, and Mythra can even be more effective for chaining combos if the opponent is already slightly damaged.

The up smash, meanwhile, will do multiple hits with Mythra versus the one powerful strike mentioned before. And yet, for the down smash, only Pyra has a meteor effect upon a hit. Switching and balancing between the two will be key to success. 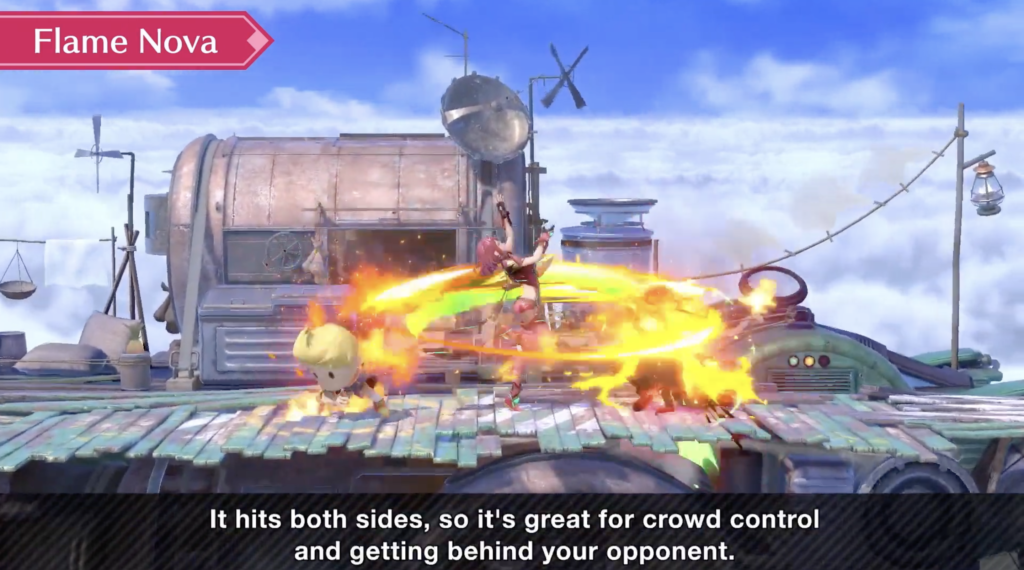 The most noticeable differences between Pyra and Mythra in Super Smash Bros Ultimate come in the special attacks. With the down special taken up by the character switch, it leaves six special attacks for the fighters to use, each based on attacks from Xenoblade Chronicles 2.

Pyra’s neutral special is called Flame Nova, a move that allows her to hit opponents on both sides as swords spin around her. You can even jump and charge this in the air, but it can’t be canceled. For Mythra, this move is Lightning Buster, which allows her to hit multiple times, but only enemies in front of her. Charging will increase damage and range, and any use of the move will give slight invincibility. 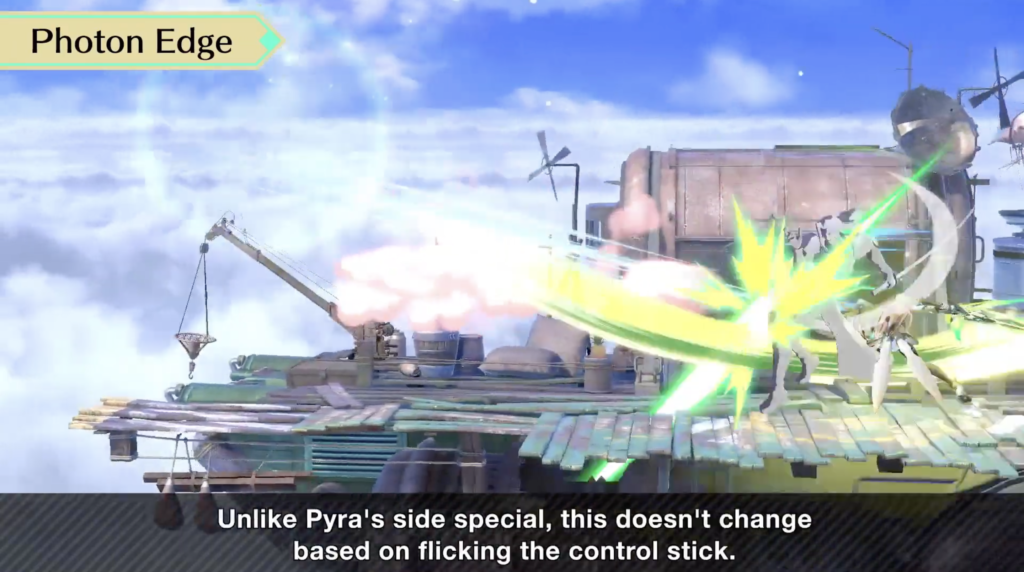 The side special for Pyra is Blazing End, which allows her to throw the sword in front of her, which travels further by flicking the stick. You can move Pyra even after launching the sword, although obviously, without the sword, she can’t attack. You can even use this during recoveries to avoid ledge blocking, though obviously without access to other moves like an up special, it is limited in its effectiveness in this situation.

For Mythra, this is Photon Edge, which sees her charge forwards while warping and unleashing a flurry of attacks. You won’t fly off the edge of a stage unless starting the attack too close to it, but you can be vulnerable during its use and will need to be careful. 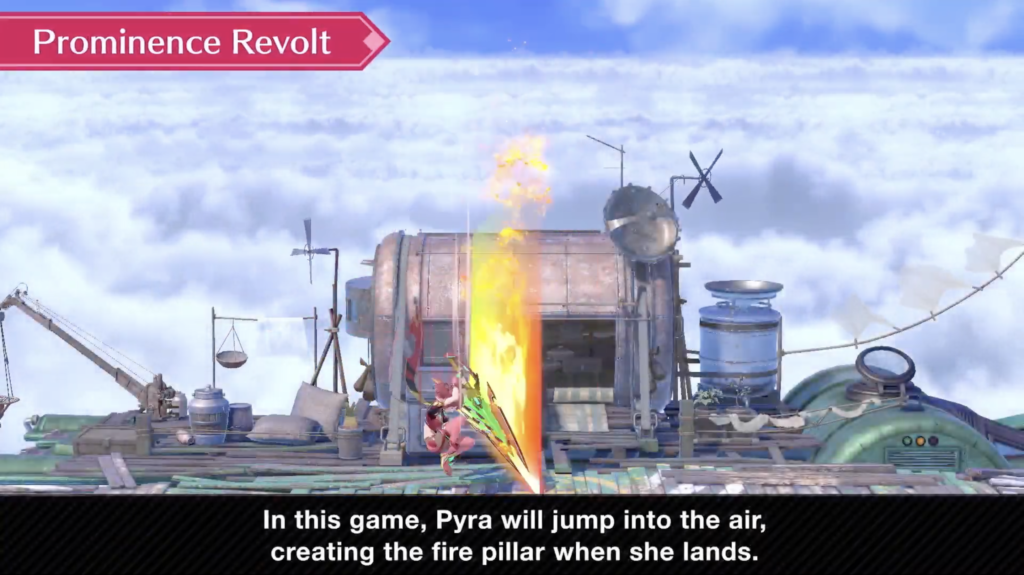 Prominence Revolt is Pyra’s up special, while Ray of Punishment is Mythra’s. Both are similar, but while Pyra will jump in the air and unleash a pillar of fire upon landing, Mythra will slash into the air and fire arrows at the ground, allowing for attacks of opponents that are off the stage. Holding or repeatedly pressing the button will allow for the use of Chroma Dust, where five arrows can be unleashed in a fan formation.

Both of these arrow attacks can be reflected, however, so be careful. Both have similar yet distinct Final Smash attacks (Burning Sword for Pyra, Sacred Arrow for Mythra), both unleashed by Rex hitting an opponent directly in front of you. Pyra will be more effective for KOing opponents in a single attack, while the ray of arrows from Mythra make for effective damage output. 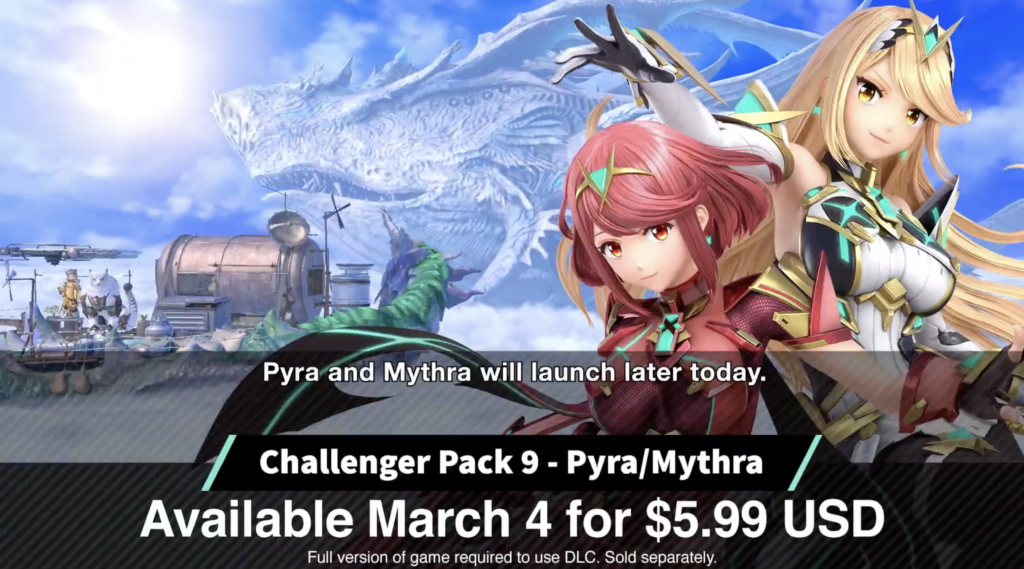 With the ability to switch between Pyra and Mythra at will increasing the dynamic range of the fighters, it’s an exciting addition to the Super Smash Bros Ultimate roster. Naturally, the inclusion of a new fighter brings with it new music for the game, with 16 tracks including 3 new arrangements being introduced to bring the total Xenoblade in-game music library to 27 songs.

Song preferences are now based on the game the Xenoblade stage is based upon now that a stage from Xenoblade Chronicles 1 and 2 have been added to the game, but all songs can be used on both stages. 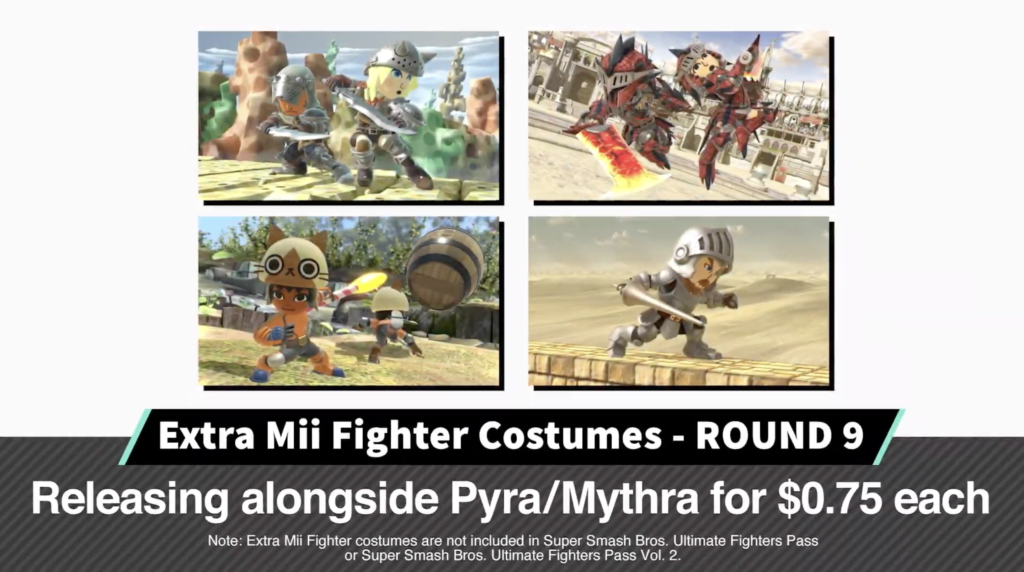 Additional Mii Fighter costumes based on Capcom games Monster Hunter and Ghosts ‘n Goblins (in response to Ghosts ‘n Goblins Resurrection coming to Switch) are launching alongside the fighters for $0.75 each today.

New fighters always impact the shape of the competitive scene and increase the already bulging amount of content Super Smash Bros Ultimate has to offer, so it will be interesting to see what the release of Pyra/Mythra brings to the game.

As Byleth from Fire Emblem: Three Houses Joins Super Smash Bros Ultimate as DLC, How Do They Control?