A wise man once described purchasing a good pair of boots as an investment. Spending enough money on boots ensures you’re getting a pair that will keep out the cold, the wet, and protect your feet from whatever obstacles you happen to be treading upon. But what if you invested in a pair of boots that were designed to keep out the manifestations of the worst impulses of humanity while you sought to protect Kingdom Hearts? What if you were looking for boots that would keep out Darkness itself?

Luxury fashion brand SuperGroupies is currently taking pre-orders for their latest collaboration with Square Enix, a series of boots inspired by the lead characters of Kingdom Hearts. Specifically the characters in mind are Sora, Riku, Kairi, Roxas, and Axel, so condolences to those hoping for shoes modeled after Donald, Goofy, or even Mickey Mouse. The boots are designed with elements reminiscent of the characters’ outfits from Kingdom Hearts III, and also feature design motifs on the insole and tongue.

At OTAQUEST we know our readers look to us to bring them information on what matters to them: The latest round-up of Shonen Jump manga, a review of the newest episode of Deca-Dence, and, of course, whether the Kingdom Hearts boots will help you keep the darkness at bay or even assist in crushing it are all things we strive to bring to our readers.

Unfortunately, as I mentioned the boots are in pre-order stages, and won’t be shipping until mid-January, so even if I did manage to convince the editors to fund purchases of each pair of boots for me (And don’t worry, I’m working on it), I’d be stuck twirling my official Kingdom Hearts silverware until then. But fear not: as someone who dedicated roughly one-fifth of their lives to the Kingdom Hearts franchise and someone who owns a few pairs of boots, I feel confident in my ability to accurately break down which boots will do the best job of protecting your feet from the unrelenting darkness. 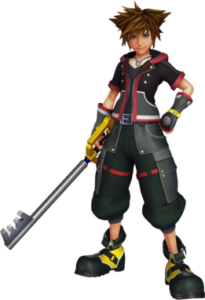 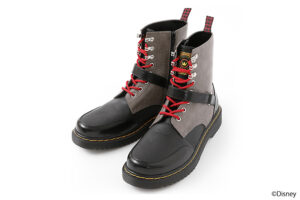 First up is Sora, our faithful series protagonist. The SuperGroupies website describes the boots as “inspired by Sora’s clothes”, and indeed the shoe has the grey on darker grey color scheme of Sora’s KH3 outfit along with its red accents coming through in the laces and pull tab, as well as the symbol on the tongue. I’m a little disappointed it doesn’t share the oversized nature of Sora’s shoes, which provided untold levels of protection against the creeping darkness, but the rest of the shoe makes up for it. The structure itself looks pretty resilient, with a rivet on the heel cap and thick outsoles with a yellow thread reminiscent of a solid pair of Doc Martens. If it’s good enough for British New Wave musicians it should be enough to protect your feet as you clomp around Twilight Town looking to beat back the agents of the darkness. It also has a belt across the top of the shoe, which I don’t exactly see the utility of, but it’s a callback to Sora’s actual character design, and I’m not here to comment on the whims of Tetsuya Nomura. The insole is also pretty neat, but I wish they used a better Keyblade than the Kingdom Key. I get that it’s Sora’s main weapon of choice and it’s the “canonical” Keyblade, but couldn’t they have used Oblivion or something? Whatever. It seems like a pretty solid shoe, and should keep your feet protected from the gaping maw of nothingness. 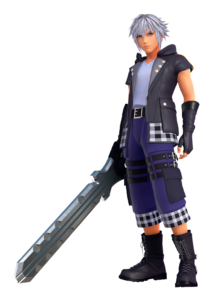 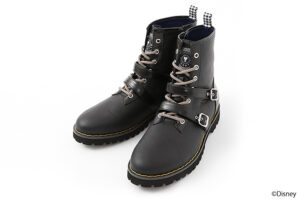 Next we have Riku’s boots, also billed as being modeled after Riku’s in-game outfit. Riku’s outfit has got a lot more navy-blue in it, but this shoe is pretty devoid of such an accent except in the insole design and the lining. It does, however, feature two belts similar to Riku’s in-game boots. These belts, unlike the Sora model, are also adjustable so that if you prefer your kicks a little more snug or a little more loose you’re able to adjust them. While I do appreciate this, I have to knock some points off because this can lead to an overconfident attitude and allow Darkness to overtake you by slipping in through your loose, loose boots. In theory the added zipper should be enough to secure the boots to your feet, but just like Riku himself I can easily see wearers opening themselves up to the darkness by loosening the belts and that’s an issue when you’re trying to save the fate of all worlds. I will acknowledge that it is accurate to the character, but if there was ever a cautionary tale about playing fast and loose with manifestations of the concept of evil it was Riku. Buyer beware! 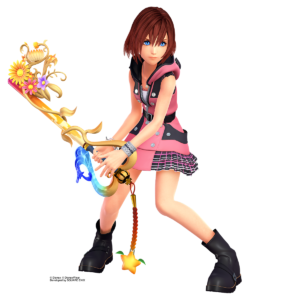 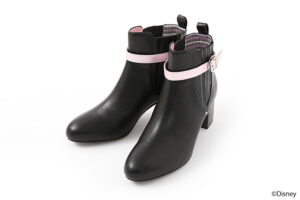 It’s interesting that in Kingdom Hearts 3 Kairi wears boots that actually resemble a pair of Doc Martens, but her SuperGroupies boots are a more “feminine” style, with a high heel and pointed toe. The main shout-out to her outfit is the pink belt that runs across the upper part of the boot, which to its credit is somewhat adjustable. I suppose that the high heel provides a punishing focal point with which to stomp an errant Shadow, but something about this shoe leaves a bit to be desired. These boots don’t even have a tongue, so the only other influences are in the checkered liner that matches Kairi’s skirt and the insole design. I do appreciate that it’s the only shoe in the series with a completely leather pull-tab, however, were I only judging these boots on the callbacks to their characters, I would say that this boot is as useless as Kairi is in most of the Kingdom Hearts series. Fortunately for these boots’ rankings I feel that they have their own merits in terms of Darkness defense. 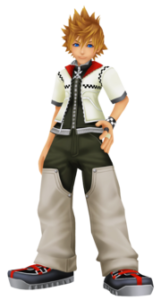 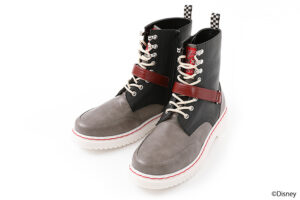 The description for Roxas’ shoe claims it matches his in-game shoe, but I think that’s just a reference to the red belt strap going across it similar to Sora’s shoe. This is actually canonically accurate, as the different materials that make up the toe, upper area, and heel are the reverse of Sora’s shoe, and as any self-respecting fan of Kingdom Hearts knows, Roxas is essentially Sora’s shadow, but not like an actual Shadow Heartless. As fans know he’s Sora’s Nobody which is kind of like his shadow as he was released when Sora turned himself into a Heartless, but Roxas is more like the shell of Sora’s body that is usually created when…never mind. Anyway, because the shoe is so closely modeled after the Sora boots, I have to give it a comparable ranking to that one, but the white outsole gives me pause that it might attract legions of Heartless looking to feed off of a source of light. Also it makes them look like a pair of Chuck Taylor shoes, and I don’t know if I want to be wearing Chucks against the forces of evil. Edge goes to Sora on this one. 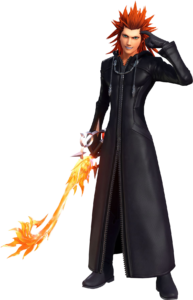 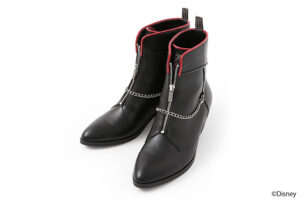 Finally, the Nobody and former Organization XIII member Axel gets his own boot as well, and to be honest it’s pretty slick. Because Axel (Or Lea, as he also goes by in Kingdom Hearts 3) wears his Organization cloak for almost the entirety of the third game, his boot is almost all black except for red trim around the topline. The pattern around the collar of the boot is supposed to represent the hood of his cloak as well. Like Kairi’s boot he’s also got a pointed toe and a prominent heel, but not quite to the degree as the one on Kairi’s model. Also, unlike Kairi’s model, this boot has a tongue, and has the same style of design present on it as all the other shoes in the collection. Obviously the influence of Tetsuya Nomura can be felt on each boot being offered, but really none more so than the chain and zipper combo on Axel’s boot. And I know what you’re thinking, “Ah, I bet that jangling chain will be a dead giveaway if I’m trying to sneak up on some Heartless”, but fear not! SuperGroupies assures that the chain itself is removable. Personally I feel that Axel’s boot kicks the most ass, which is probably why it’s also the most expensive in the series. But listen, when you’re stomping down the forces of evil, you really get your munny’s worth.

Each boot has their own strengths and weaknesses when it comes to protecting their wearer from the threat of encroaching Darkness, but there is a definite hierarchy coming through. Using my expert knowledge gained from playing Kingdom Hearts a couple times and owning a few pairs of boots, I feel that I have the definitive ranking of which boots protect from Darkness the best:

And there you have it. Please direct all complaints to my personal gummi phone. Please stay tuned for a possible part two as soon as I can convince the editors to buy me five pairs of shoes, and also for the shoes to arrive.