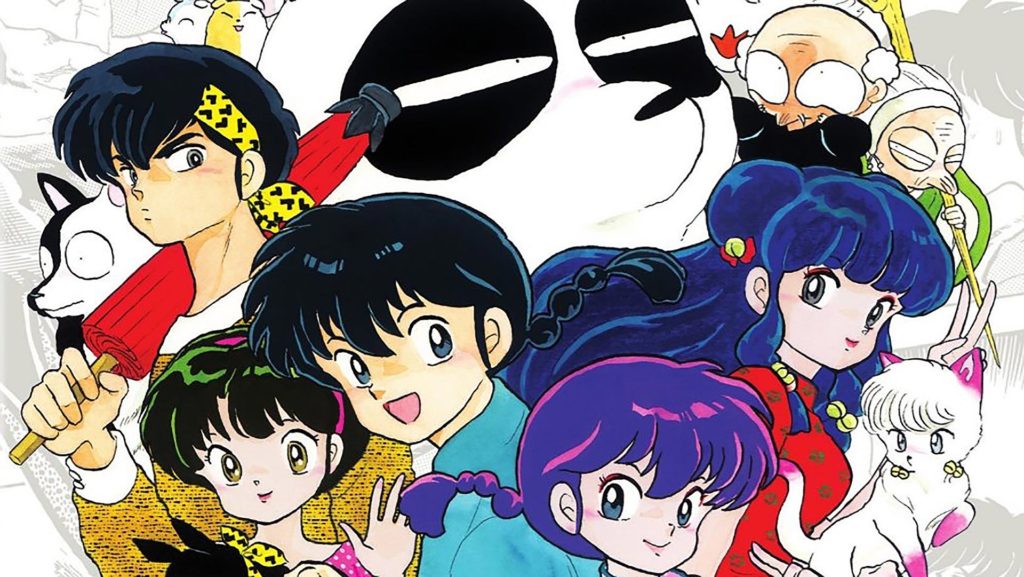 Aside from it being one of the biggest formative experiences of my childhood, it’s a wacky, fun, gender-bender of an anime that promises belly laughs and loads of crazy antics from the huge cast of characters over the course of many episodes.

And don’t let its age fool you, Ranma 1/2’s slapstick and situational gender-based humor with a dash of teen romance is exactly what makes it timeless.

Brought to you by Rumiko Takahashi, the master of slapstick and situational comedy and agonizingly-long ‘will-they-won’t-they’ romances, Ranma 1/2follows the titular protagonist, 16-year-old Ranma Saotome, as he’s dragged into the home of his father’s longtime friend, Soun Tendo, and his three daughters, Kasumi, Nabiki, and Akane.

The only problem is he doesn’t arrive as 100% himself – because he is actually a she!

Genma Saotome, Ranma’s father, took him on a trip to a distant mountain range in China to train near some cursed springs called Jusenkyo.

Against the warning of their tour guide, they begin fighting, and Ranma is knocked into the Spring of Drowned Woman, which curses him to change into a female when splashed with cold water. Dousing him in hot water changes him back to his original male form. Ranma knocks Genma into another cursed spring in retaliation, resulting in him being cursed to turn into a panda under the same conditions.

To make matters worse, he’s been put in an arranged marriage with the youngest daughter, Akane Tendo, who finds this out in probably the most mortifying way possible – walking in on him full commando in the bath. Clearly the perfect way to start a relationship.

Needless to say, Ranma is mortified by this huge, unwelcome change and is determined to get out of his engagement and get back to China to return to normal by submerging himself in the Spring of Drowned Man.

Ranma 1/2 Contains No Shortage of Characters and Romance

Did I mention nearly every character is a martial artist?

Both the Tendo and Saotome families are highly skilled martial artists (with the exception of the well-meaning, motherly Kasumi and the money-loving opportunist, Nabiki).

While there are some coming-of-age and romance elements, the premise centers heavily on the use of martial arts – the primary reason for Akane and Ranma’s engagement is to inherit the Tendo Dojo.

Ranma and Akane attend Furinkan high school, which sets the stage for the introduction of a wide, sprawling gaggle of characters, fiances, oblivious, yet annoyingly persistent suitors, that will follow these two in their mutually unwanted, turbulent engagement. Chaos and humor ensue.

Some of these suitors have also made an ill-fated pilgrimage to Jusenkyo and come back with a curse of their own, including the brooding, vengeful, yet awkward and shy Ryoga Hibiki – cursed to turn into a black piglet, and the bubbly, affectionate, yet deadly Chinese Amazon Shampoo, who turns into a cat. Ryoga and Shampoo are interested in Akane and Ranma, respectively.

Ranma, being the impulsive, strong-willed character he is, is anywhere from exasperated to terrified of all these prospective suitors (especially Shampoo, who can change into one of his biggest fears – yes, a cat).

However, he often uses his gender-flipping to his advantage to advance his ultimate goal of returning to China and submerging himself in Spring of Drowned Man, which would allow him to stay a man – permanently.

Unsurprisingly, this gets him into trouble with everyone around him, not least of which with people who would rather he stay just the way he is.

Akane, equally stubborn and strong-willed in her own right, spends a lot of time-fighting off her fair share of suitors (such as Kuno and Ryoga) as well, with some jealous of or just plain not caring about her engagement to Ranma.

However, in true Takahashi fashion, things may not be all that unrequited between Ranma and Akane. They often pretend they don’t care about the other, but get weirdly jealous when one of the many suitors get just a little too close for too long.

Much of the underlying story follows their developing romance and plays with the ‘will-they-won’t-they’ dynamic.

Some other major players (interlopers) of the Ranma-Akane dynamic include:

Plenty of Episodes Detail Ranma’s Adventures with His Friends

The Ranma 1/2 manga debuted in September 1987 in Shonen Sunday and ran for nine years.

The transition to TV wasn’t so easy, however – the anime adaptation debuted on April 15th, 1989 on Fuji TV’s “Teens Golden Time” block, which proved fatal for the first season.

However, after some re-tooling and a different time block, the show persevered.

Clocking in at 161 TV episodes, three movies, and twelve OVAs, there’s plenty of Ranma to go around – though the same can’t be said for his suitors.

Manga vs Anime – Which is Best?

So begins the eternal debate – if you want to start on Ranma 1/2, which do you choose – manga or anime?

I’m definitely biased, as I began reading the manga (as I did for a lot of series when I was 12) because the anime wasn’t as easy for me to access in ye olden days of 2005.

But it’d be a waste of a martial arts comedy series to not see the wacky hijinks play out on the screen, not to mention the infectiously cute opening and ending songs.

If you’re wondering how well the anime lines up with the manga storyline, there are some stories that don’t quite make it onto the little screen. Sadly, the manga is the only place you will see the series reach any kind of satisfactory conclusion, clocking in at 407 chapters in 36 volumes published by VIZ Media.

This is not to say the episodes, movies, and OVAs aren’t worth it! If you enjoy the body-switching, gender-flipping, slapstick-fueled humor, you’ll always have a good time.

And there’s never a time where Ranma isn’t getting himself in trouble or trying to get out of some that someone else has put him in. Some side characters of course get their spotlight episodes as well.

A lot of the humor derives from Ranma lacking a sense of propriety, which often leads to him walking around without a shirt and forgetting certain key assets he now possesses. Due to water being a key part of the plot, there’s more than a few arcs that take place in the bathhouse, so predictably, there’s also a lot of nudity that pops up, but it’s nothing explicit and it’s all for laughs.

Certain parts might not vibe all that well with the socio-political climate of 2020, but that also makes it prime fodder for a modern-day reboot, but that depends on Japan and Takahashi’s willingness to play along with a 2020 vibe.

Who is Rumiko Takahashi?

It would be remiss of me to miss touching on the mind behind such a universally popular series. Born in 1957 in Niigata, Japan, Rumiko Takahashi got her start at a manga school founded by Kazuo Koike, author of Crying Freeman.

Since 1978, she’s created many manga series, from shorter, less well-known ones like One Pound Gospel, to the long-running feudal fairy tale saga InuYasha. Her award-winning works are extremely popular around the globe, and she’s one of the wealthiest manga-ka of all time.

There seems to be no genre untouchable for Takahashi. Her works have run the gamut of sci-fi comedy (Urusei Yatsura) to slice-of-life romance (Maison Ikkoku) to fantasy horror (Mermaid Saga), always with a dash of that special offbeat Takahashi humor.

Queen of Universal Quirky Appeal With A Soft Center

A core staple of her work is a wide variety of characters and no shortage of ideas for stories. My only complaint would be Takahashi’s seemingly ardent love of the status quo, which can lead to some stories going over the same beats over and over, and sometimes she’s a little too enthusiastic with the introduction of new characters at the expense of advancing the plot.

That being said, however, I have always enjoyed the unique quality of her works, and there’s always a sense of heart at the core of the stories, they’re never truly cynical or nihilistic.

Takahashi’s willingness to explore different genres and characters while centering her stories around this basic principle is part of what makes her works so universally appealing and timeless at the core.