If you ever wanted to talk to an isekai character, BookWalker has an app for you.

On Tuesday, the company added Raphtalia from The Rising of the Shield Hero to its Isekai smartphone app.

Within the app, Raphtalia can hold a conversation with you. Ask her a question, and she’ll answer to the best of her ability. How well she can answer depends upon your wallet (see “microtransactions” below).

Still, even just the free version is interesting. Ask Raphtalia an annoying or embarrassing question, and she’ll get annoyed with you or get embarrassed.

Best of all, you are hearing Raphtalia’s actual voice actress, Asami Seto. The app uses her voice and speech synthesis to create real-sounding speech.

If you type your name into the app, she will call you by name. If you type in a Western name, she will say your name the Japanese way, i.e. “Jemuzu” for James.

A few pre-recorded lines from the anime are also included.

The app also comes with a stopwatch function and an alarm. 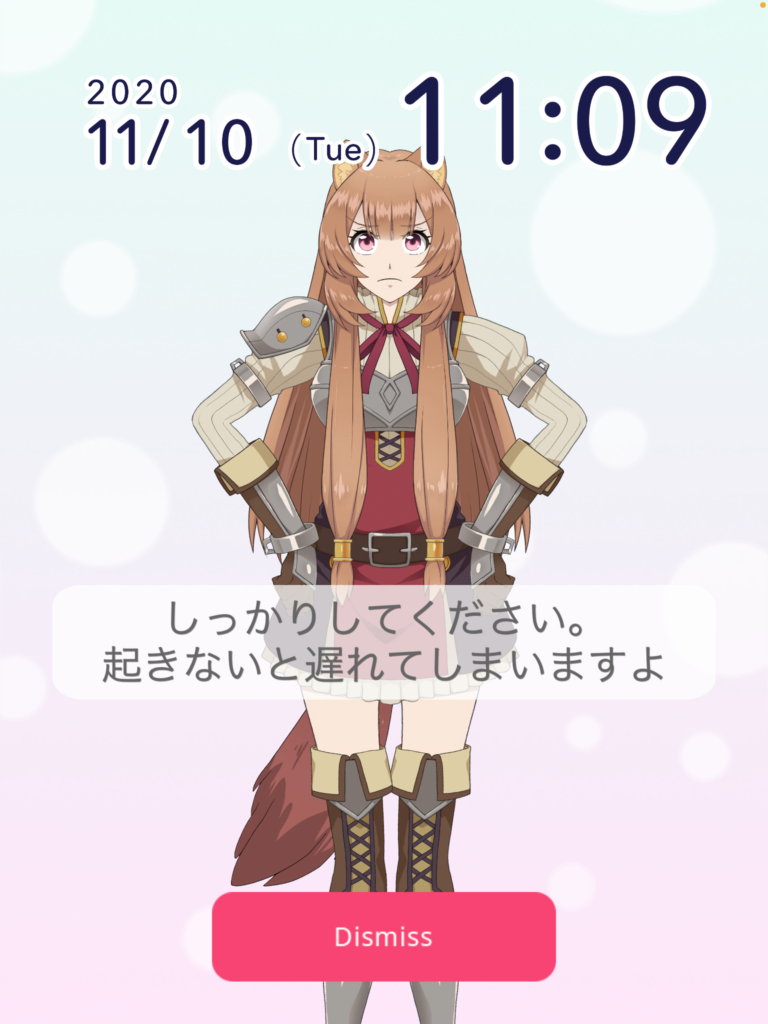 If you set the alarm for the morning, Raphtalia will tell you “good morning” (that is, she’ll say “ohayo gozaimasu” in Japanese) when the alarm goes off. A little bit of music also plays.

She’ll get miffed if you fail to turn off her alarm after a short while.

Microtransactions and Other Details

I have to admit that the first time that I loaded the app onto my iPad, I had a problem with it.  However, I also have Pokemon Go and Animal Crossing: Pocket Camp on my iPad, so there might have been a conflict or memory problem of some kind.

Restarting the iPad fixed the problem.

The app comes in both Japanese and English versions, which controls the language for changing the settings of the app.

However, the translation only goes so far. If you want Raphtalia to understand you when you speak English, you have to buy the English expansion from the store.  It also helps with subtitles, so you can understand her better.

Also, you can buy extra clothes for your isekai characters.  A maid’s outfit for Raphtalia will cost $6.99, the English pack will cost $5.99, and the paid version of her basic conversation will cost $3.49. The paid version increases what she can talk to you about.

If you ask Megumin to “explosion, kudasai,” she’ll yell it.

BookWalker is a Kadokawa company, so naturally the app would feature Kadokawa series.

You can easily switch back and forth between the two characters.

From now through Nov. 24, BookWalker will have a special campaign to celebrate Raphtalia’s addition to the app.

if you follow the Isekai Twitter account (@Isekai_BW), and retweet certain tweets, you’ll have a chance to win an illustration board by Asami Seto.  There will be three winners.

The campaign webpage does state that you might have to pay customs fees if you live outside Japan.  But, they will ship the board to you.

The app is available in both iOS, and Google.