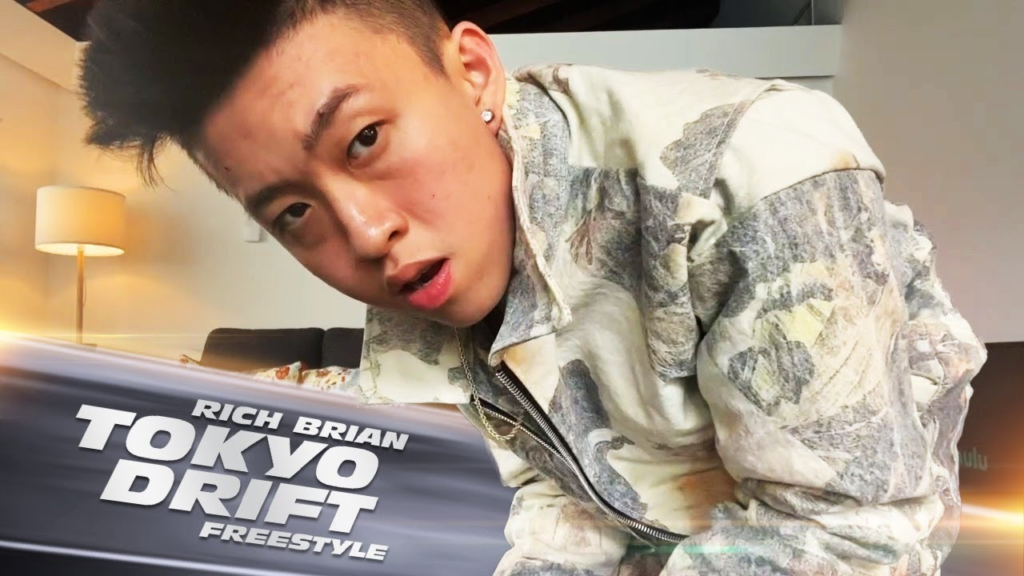 After 10 days stuck at home social distancing due to the coronavirus outbreak, the rapper took to his living room (and backyard) to freestyle some verses over the beat of TOKYO DRIFT—the main theme for the 2006 The Fast and the Furious: Tokyo Drift movie by the TERIYAKI BOYZ® (Ilmari, Ryo-Z, Verbal, Wise, and NIGO®) and produced by The Neptunes. The bi-product of boredom, the video shows Rich Brian getting weird in ways we probably all have at this point.

The homemade video went viral—amassing more than 5 million views since its release. A series of other rappers followed suit on the 88rising channel with their own versions of TOKYO DRIFT FREESTYLE. Keep reading to see what they produced.

Check out Rich Brian on Instagram (where he was over 3.3million followers) and Twitter. Or listen to his other works on Spotify and the 88rising YouTube channel. His single BALI is out now (featuring Guapdad 4000).

The first to join in was Korean-American artist AUDREY NUNA in a black and white video which starts with her brushing her teeth. The rising star’s flow captures the bleary-eyed energy and boredom-turned-weird actions that many of us are suffering from in self-isolation. The video’s description keenly asked “WHO’S NEXT?”—really igniting the ongoing series of rappers.

Vietnam’s queen of hip-hip, Suboi, answered the call. She released her own version the following day where she raps about life as a new mother—featuring her two month old daughter Nina. You might be familiar with Suboi from her feature in the L1 remix of Utada Hikaru’s song Too Proud alongside XZT and EK.

Who was next this time? Breakout Japanese artist JP THE WAVY—who just released his first album LIFE IS WAVY. In his colorful version, JP THE WAVY is joined in his living room by girlfriend Niina. BAPE, HUMAN MADE, Girls Don’t Cry, and Louis Vuitton decorate the space as the two play on their Nintendo Switch, dance, and chill. Throughout their many outfit changes, JP THE WAVY and Niina can be spotted wearing BAPE, Girls Don’t Cry, and AMBUSH®.

ANARCHY is one of Japan’s most established rappers. He grew up tough in Osaka, joining a motorcycle gang before eventually pursuing music. In his version of TOKYO DRIFT FREESTYLE, the veteran rapper puts a bottle of Purell forward as he takes us through the ways he’s entertaining himself while stuck in home—from ordering UberEats to watching AmebaTV and playing games. ANARCHY now has his own music label, 1% (ONEPERCENT)—which has signed the incredibly popular rapper WILYWNKA. ANARCHY’s version was dually uploaded to the 88rising and ONEPERCENT YouTube channels.

Leon Fabourakis and female rapper Awich both dropped their versions on April 9th. Leon is a rising star in the Japanese hip-hop scene. In 2018, he signed to 1% (ONEPERCENT) after releasing his first EP BEAT TO DEATH. The young Yokohama-born artist joined the others with an energetic verse that didn’t do a lot as far as encouraging everyone to #StayHome to prevent the spread of COVID-19. His version was also uploaded to the ONEPERCENT YouTube channel.

Next up was Awich. Awich is an Okinawan rapper signed to YENTOWN. She grew up in the midst of the island’s continued struggle for independence from mainland Japan and removal of American military bases. Growing up, Tupac became her textbook as she learned to turn negativity into strength. Awich’s version takes us into her ultra-comfy bedroom as clips from Animal Crossing, Akira, and the movie Gremlins play in the background.

So, who do you think is next? Let us know which rappers you’d like to see add their own version of TOKYO DRIFT FREESTYLE to the growing list.