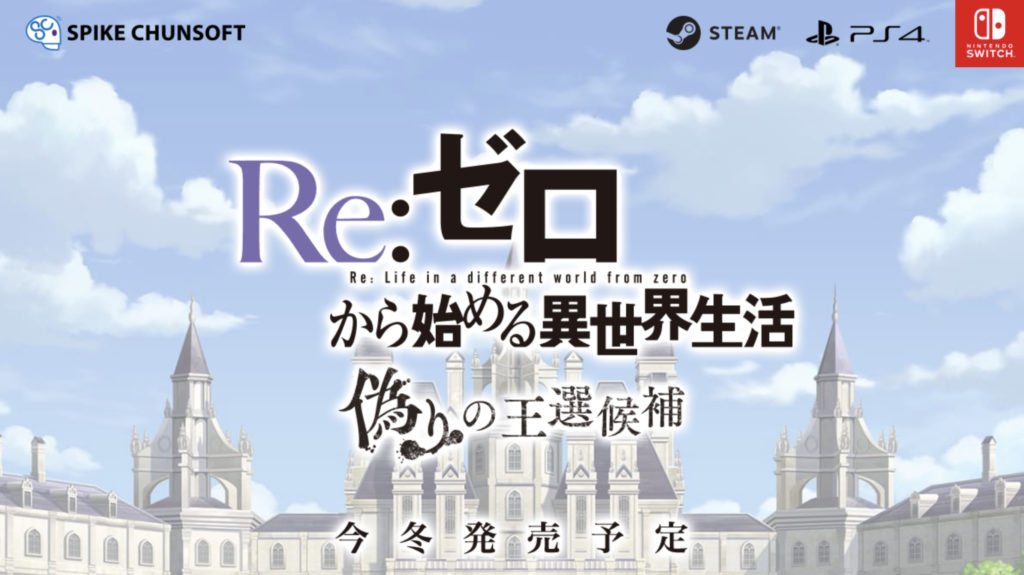 Although the originally-scheduled premiere of the second series of the Re:Zero Starting Life in Another World was delayed from its planned Spring premiere in April for a July start date, excitement surrounding the series remains high. After the first series of this light novel adaptation captured the imagination of anime fans around the world interest in the series has continued to grow, so it’s perhaps no surprise that Kadokawa and the various companies behind the series have sought to capitalize on this success. Scheduled for a Winter 2020 release, a brand new video game based on Re:Zero for Nintendo Switch, PS4 and PC is the latest attempt to take advantage of the series’ popularity both inside and outside of Japan.

An action adventure game developed by Spike Chunsoft, Re:Zero Starting Life In Another World: False Ruler Election Candidate (Name translated, not official) will center around the story of the first season while diverging from this in a number of ‘what if’ scenarios that allow fans and new players alike to experience the story fresh. This will all be done with the involvement of the original author Tappei Nagatsuki and light novel illustrator Shinichiro Otsuka.

For fans outside of Japan hoping that the game will be made available internationally, the existence of listings for the title on Nintendo Switch and PS4 on Amazon UK under the title ‘Re:Zero The Prophecy of the Throne’ suggests that the game’s release in English will be a matter of when, not if. In the meantime, however, this remains speculation.

In any case, Re:Zero Starting Life In Another World: False Ruler Election Candidate will release on Nintendo Switch, PS4 and PC in Japan at the end of the year in Winter 2020, and you can find screenshots from the game and more details for the title over on the title’s official website.