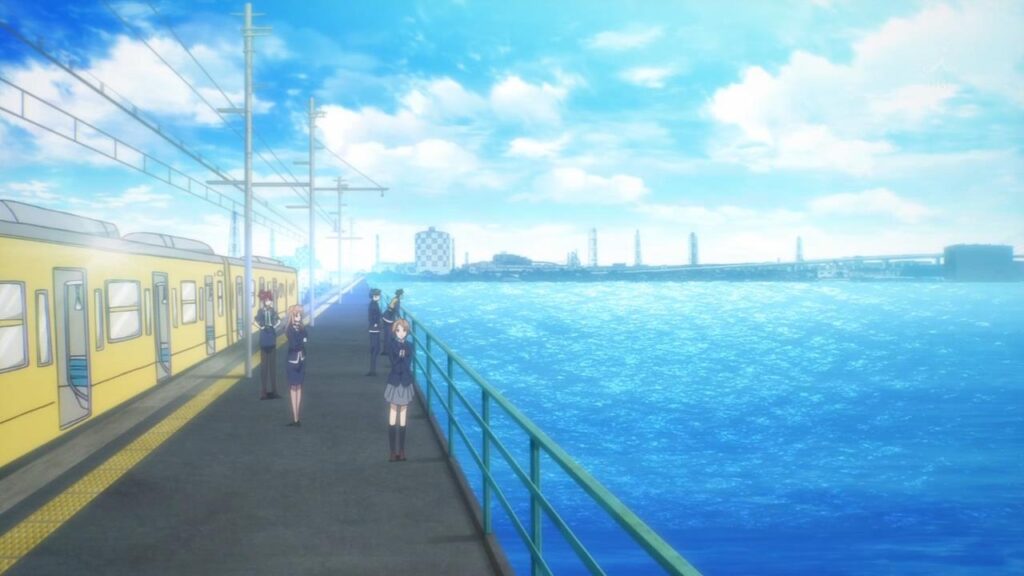 This is the second one of my little musings about real-life locations found in anime.

In the first one, we visited a small town which loves GeGeGe no Kitaro;  joined the Lucky Star girls on a meta trip to Kyoto Animation; and learned about the K-On! school. We also explored the setting for Haruhi Suzumiya; hit the beach in Ika Musume; and looked at the Tokyo teen culture hot spot of Super Gals!

This time, we’ll start with a train trip to an unusual station in Rail Wars.

As the name implies, Rail Wars! is all about railways. So naturally, you would expect to see a lot of real-life station and railroad locations — including Tokyo Station, which nearly gets blown up by terrorists in one episode.

If you’ve ever been to the real Tokyo Station, you know that it is quite possible to pass through without seeing the building’s historic Marunouchi entrance. For example, you can enter through the Yaesu Entrance in the back (east side). Or, you can arrive by subway, pass through some underground passages and transfer to a commuter train or Shinkansen.

That’s a shame, because the Taisho-era brick facade (finished in 1914) is worth seeing. It’s a classic building from a time when Japan was still adjusting to the modern world.

However, Tokyo Station isn’t even the most interesting real-life location in Rail Wars!  There’s an even more interesting one, Umi-Shibaura Station, a remote location featured in Episode 3.

In real life, the train station exists for two reasons. First of all, there is a Toshiba factory across the street.  The station sits on company land, so the station is obviously meant for factory commuters or visitors.

According to Wikipedia, you can’t actually leave the station legally without permission from the company. However, others have found that there is a small fenced park next to the station which is open to the public — or else Toshiba doesn’t mind; it’s hard to tell.

The only other reason for visiting Umi-Shibaura Station is to take photographs of Tokyo Bay. The station sits right at the water’s edge.  The station platform is elevated slightly, but in photos it looks like there’s nothing between you and the water.

The station is the end of the line for the Umi-Shibaura branch of the Tsurumi Line in Yokohama. It’s an industrial harbor area with no tourist attractions.

A word of warning: Train service is limited, so if you arrive at the wrong time, you could get stuck there for a while.

Is The Order A Rabbit?

This cute little comedy takes place not in Japan, but in Colmar, a town in the Alsace region of France.

As real-life anime locations go, Colmar has to be one of the more unique and special ones. Few anime shows venture outside of Japan (not counting fantasy realms, of course). On top of that, Alsace-Lorraine is not high on the list of French tourist destinations, so the audience probably isn’t familiar with it.

Still, the town looks cute and picturesque. The town has a vaguely French/ Germanic/ Medieval European look to it. As if that wasn’t pretty enough, Colmar has canals as well.

It makes for a good location for a show about high school girls who work at coffee shops and cafes. The location doesn’t really factor into the plot, but it does add atmosphere to the series.

Ironically, Alsace-Lorraine has a somewhat dark history.  It is a border region between France and Germany, which means that it has changed hands several times — to Germany after the Franco-Prussian War, back to France after World War I, to Germany again during World War II and back to France since then.

That’s right, this lovely European region — the setting for a cute little fluffy show — used to be a political football trapped between two warring nations.  Luckily, Is The Order A Rabbit? contains plenty of sugar to cover up any bitterness.

This racing series features a lot of twisty mountain roads, with a lot of hairpin curves which almost look designed for drift racing.

The creators went to the trouble of using a lot of real car makes and models, especially the Toyota Sprinter Trueno AE86. So of course they would use real mountain passes for those cars to race on.

All of the locations in the series are fictionalized versions of real places in Gunma Prefecture, a mountainous region between Tokyo and Niigata. The names have been changed, probably to prevent people from attempting the very illegal and dangerous races.  But fans of the show figured it out anyway.

Many of the races take place on Mount Akina. In real life, Mount Akina is Mount Haruna in Takasaki, Gunma.

“Akina Pass” is actually the Jomo-Sanzan Panorama Highway.  You can use Street Views to Google your way down Akina Pass.

Here’s the first hairpin curve on the pass, as seen by Google’s cameras.

Japan is a mountainous country, with most of the population squeezed into the flatter parts of either Kanto or Kansai. Geographically, there are undoubtedly many places where a series like Initial D could take place.

But Gunma makes sense.  It’s definitely curvy, but it’s not as famous as the nearby hot springs resorts at Nikko. And Initial D has cemented Gunma’s international reputation as “a driver’s paradise” where real-life Takumi Fujiwaras live.

Most versions of Tenchi Muyo! take place at Tenchi’s house near the family’s Masaki Shrine in Okayama Prefecture.

Tenchi in Tokyo moves some of the action to Tokyo, obviously.  A lot of Tenchi Universe takes place in outer space, far from Earth.  But in all versions, Okayama is Tenchi Masaki’s hometown.

In some cases, the Masaki family’s Okayama location is used like shorthand for “far from Tokyo,” or even a long distance from Osaka, or any major city.  The Masaki home is clearly not even that close to Okayama City.

This remoteness helps to explain how multiple spaceships can appear out of nowhere and even crash without alerting the local authorities.

Many people in the series are named after places in Okayama, or at least they share a name. Since some of these characters are supposed to be hundreds of years old, it’s possible that the places (in Tenchi’s fictionalized world) were named after them, rather than the other way around. An incomplete list would include:

According to reports, there actually is a specific shrine in Okayama which was the inspiration for the Masaki Shrine.

For some odd reason, English-language websites can’t seem to get the name of the town correct. It’s Asakuchi.  In any case, Tarojinja, or Taro Shrine, does resemble the Masaki Shrine where (either Ryoko or Washu, take your pick) was once imprisoned.

A rock formation called Oni no Sashiage Iwa in Soja, Okayama, looks a lot like Ryoko’s cave. Not only that, but the name Oni (demon) would fit right in with Ryoko’s origin story in the first OVA episode.