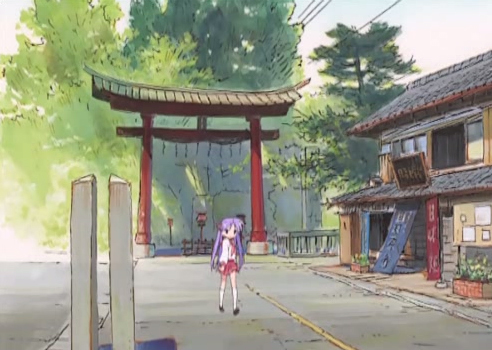 Some anime creators are known for inventing imaginative and exotic-looking fictional locations.   Just take a look at the fantastic fantasy realms in just about any Hayao Miyazaki film, for example.  Or the awesome, fortress-like Honnoji Academy from Kill La Kill.

But, there are many others who prefer to deal with real-life, real-world locations.  There are pragmatic reasons behind this, of course. Slice-of-life comedies and high school tales need to be grounded in reality in order to be taken seriously.  Character-driven anime shows don’t need the background scenery to upstage the plot or distract from the animated actors.

So, much like a location scout for a live-action movie, they will pick a real, actual location which is suitable for the story — or perhaps, the original manga or light novel author already had a place in mind.  Often the anime creators will copy that location as much as possible.  If a manga artist grew up in Toyama, Saitama, or Fukuoka, he or she will draw Toyama, Saitama, or Fukuoka landmarks.

This means that there are many recognizable anime “filming locations” which exist in real life.  This can be a fascinating bit of trivia for an anime fan to pay attention to.

If you have been to the area, you may notice landmarks that you recognize, which is another way of connecting emotionally with a show.  Some fans have even gone so far as to go on “pilgrimages” to locations made “famous” by an anime series.

But Wait, What About …

Of course, we admit that a certain virus may get in the way of actual, in-person anime sightseeing. The COVD-19 crisis will prevent most people from taking trips, vacations or wandering too far from home in search of anime locations.

For the time being, online visits will have to do — at least you don’t need a passport.  And those restrictions won’t last forever.

When the restrictions are lifted, some of these locations are far from normal tourist destinations.  But, even if you never get the chance to visit that part of Japan where your favorite anime was set, it is still interesting to know that there is a place behind the anime artwork.

When it comes to real-life anime locations, GeGeGe no Kitaro is an interesting case.  The series is a supernatural fantasy about yokai struggling to adapt to life in modern Japan.  Naturally, the locations are a mixture of real — a generic version of downtown Tokyo shows up a lot —  and fictional — don’t bother searching for the GeGeGe Forest where most of the main characters live.

But, a couple of episodes got a little meta recursive with its location.  Here’s how it happened:

Shigeru Mizuki, the creator of GeGeGe no Kitaro, was raised in the coastal town of Sakaiminato in Tottori Prefecture.  Now, Tottori Prefecture is a bit off the beaten path — it’s rural, far from Tokyo, and it’s on the Sea of Japan, so you have to cross the mountains to get there.

Sakaiminato is a remote town in a remote part of Japan. After GeGeGe no Kitaro became popular, they celebrated with a bit of “local boy does good.”  There are Kitaro statues on Mizuki Shigeru Road, and a Mizuki Shigeru Museum. (Note: Using the Japanese “family-name-first” nomenclature.)

So, here’s where reality meets fiction. The sixth version of GeGeGe no Kitaro began running in 2018.  It seems that token human schoolgirl Mana Inuyama has family in Sakaiminato, and she visits them in Episode 16, The Mystery of the Tide! Umizato!

The Kitaro gang is still there in the next episode, Kani-Bozu and the Ancient Mystery.  At the end of the episode, the town puts up a bunch of yokai statues, including a statue of Kitaro.

Incidentally, the gang pays another visit to the area in episode 65, Nation Founding?! Mabyo’s Great Tottori Empire, and episode 66, The Shinigami and Sakaiminato’s Hidden Village.

Kagami and Tsukasa are shrine maidens (miko) at Washinomiya Shrine in Saitama.  After the shrine’s location was revealed, it became a place for otaku to visit, with some people creating Lucky Star-themed prayer boards.

According to reports, shrine officials and local residents weren’t initially sure what to make of the extra attention, but it seems that they eventually came to accept it.

Washinomiya is on the Tobu Isesaki Line, a few stations away from Kasukabe Station, which is frequently seen on the series.  Nearby Kasukabe Kyoei High School is the inspiration for the high school on the show.

The creators really did their homework for this episode, as the silver-and-blue commuter trains that the girls ride look like the actual trains you would use to get from the Saitama area to the convention center.

In case you’re wondering, they’re riding the Rinkai Line, which technically doesn’t go all the way to Saitama Prefecture. But it does have “through-running” service out to Kawagoe in Saitama.  The route doesn’t include Kasukabe, but they could have easily made a transfer.

Episode 21, Pandora’s Box, gets a little meta as the girls go on a school trip to Kyoto.  Konata convinces the others to take a side trip to the main office of Kyoto Animation.

Of course, Kyoto Animation is the company that animated Lucky Star. The building that they visit is not the one which burned in 2019.

As Crunchyroll reported earlier, the high school manga and anime series K-On! may have helped to preserve the town where it was “filmed.”

The series is set at the fictional Sakuragaoka High School.  In the anime, the look and design of the high school is based upon the old Toyosato Elementary School building in the small town of Toyosato, Shiga Prefecture.  It’s about halfway between Nagoya and Kyoto.

The school building had been built in 1937. It served as the local elementary school for several decades.  However, the school moved to a new location in 2004, several years before K-On! first aired in 2009.

According to the Japan Times, the building might have been torn down, except that the local people fought to protect it. (Note that this was before K-On!, so the show can’t take credit for that.)

The building was renovated, and parts of it were turned into a tourism office, a day care center and a library.

After the anime series came out, Toyosato grabbed the anime tourism ball and ran with it.  They created a replica of the light music club room, as it might have looked on the show.  They also preserved a classroom.

The Toyosato Tourism Association lists the school as one of the top attractions in the area.

Outside of the school, you can find various other K-On! touches, such as cut-outs of various characters on the way to the school.  As Google Street View shows, they are still there a decade after the anime TV series started (Google’s camera was last updated in April 2019).

Nagaru Tanigawa, the author of the Melancholy of Haruhi Suzumiya series of light novels, was born in Nishinomiya in Hyogo Prefecture.  The city is between Osaka and Kobe.

When Kyoto Animation adapted the novels to an anime TV series, they used locations in the Nishinomiya area.   The train station where members of the SOS Brigade would meet is Nishinomiya-Kitaguchi Station.  North High is Nishinomiya Kita High. (Kita means “north.”)

Nishinomiya isn’t quite as anime-oriented as Toyosato.  For one thing, the city is home to Hanshin Koshien Stadium, where the Hanshin Tigers play. Anime fans might know Koshien from the National High School Baseball Championship, a frequent goal of many sports anime and manga series.

However, there is Haruhi tourism in the area, including private guided tours of Haruhi Suzumiya locations.

To be perfectly honest, Japanese beaches aren’t that great.  Generally speaking, international tourists don’t come to Japan for the surf and sand.  But there are other reasons to visit this part of Japan — as Ika Musume discovers when the others take her on a tour around the area.

In episode six of season two, they visit Kotoku-in, home to the Kamakura Daibutsu, or Great Buddha of Kamakura.  This giant outdoor statue of Buddha is 43 feet tall. The statue is not far from Yuigahama.

They also visit Tsurugaoka Hachimangu Shrine in Kamakura and the island of Enoshima. To get around on their little sightseeing journey, they take the Enoshima Electric Railway, or Enoden.

Japan is full of fast trains, crowded commuter trains and trains to seemingly every destination in the country.  But the Enoden is worth mentioning for being a small, single-track streetcar or tram. It’s not at all like the crowded subways of Tokyo.

The comedy series Super Gals!  takes place almost entirely within Shibuya, Tokyo.  Admittedly, Shibuya isn’t quite as unusual or unique as some of the other locations we’ve mentioned — but, considering that it’s in the middle of Tokyo, it should be easy for a tourist to visit.

Of course, many of the show’s “locations” are fairly generic Tokyo cityscape scenes. If you visit Shibuya today, there are buildings which didn’t exist when the show first aired in 2001. Tokyo is constantly changing.

But at least Shibuya’s most famous landmarks haven’t changed — busy Shibuya Crossing and the statue of Hachiko. You can also see the Shibuya 109 building in the background of some scenes (they changed the 9 to a Q for copyright purposes).

Hachiko was an Akita dog who became famous for waiting for his owner at Shibuya Station.  Sadly, Hachiko’s owner died, but the dog had no way of knowing that.  As the story goes, Hachiko would continue to return to Shibuya Station every single day — until the dog himself died nine years later.

Hachiko’s story meshes well with Japanese culture, which values loyalty. Today, the Hachiko statue serves as a meeting place, and it’s probably the most iconic symbol of the area.

On the show, Hachiko makes several cameos, including dancing in the opening theme.  The gals of Super Gals are as loyal to Shibuya as Hachiko was to his master.

Shibuya’s rival to the north, Ikebukuro, shows up in the series as well.  It’s rather heavily implied to be a Shibuya wannabe, as it is home to Ran Kotobuki’s rival, Mami Honda.

(The show completely ignores Shinjuku, which is directly between the two neighborhoods, possibly because half of Shinjuku Station is technically within Shibuya Ward.)

In the end, Super Gals! doesn’t capture the buildings and locations of Shibuya, so much as the local spirit of fashion and youth attitude.