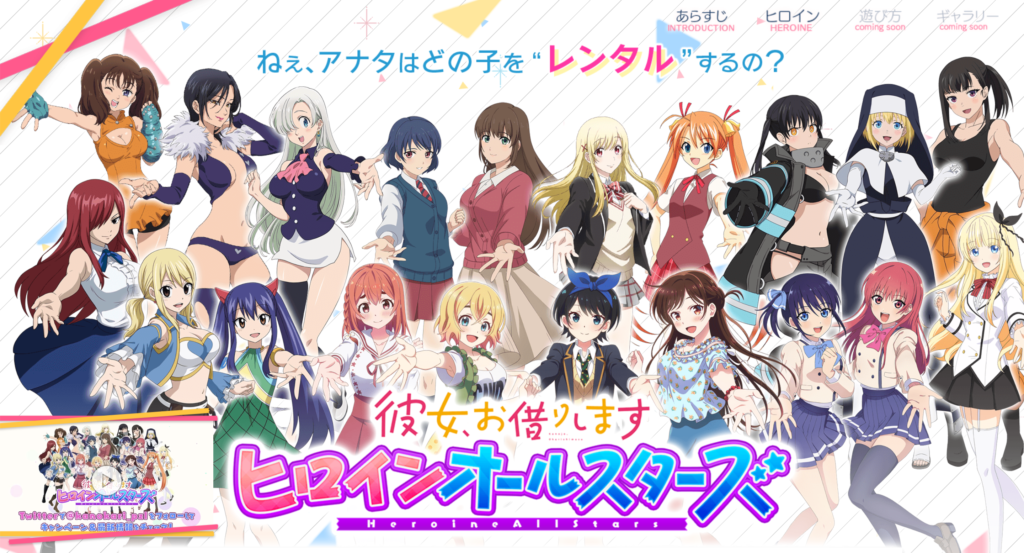 As if a game where you dated all the characters from Rent-A-Girlfriend (Kanojo, Okurishimasu) wasn’t enough, other girls from Weekly Shonen Magazine are joining the party.

Announced yesterday by way of a fancy trailer, Kanojo, Okurishimasu Heroine All-Stars (or Rent-A-Girlfriend Heroine All-Stars in English) will be the first game of any sort based on Reiji Miyajima’s love comedy series. Yet, it won’t just be his characters coming along for the ride: in addition to Chizuru, Ruka etc. there will be sixteen others from eight different Magazine series.

It’s a little strange that a character from Yamada-kun, Miki Yoshikawa’s last series that ended years ago, is making an appearance in Rent-A-Girlfriend Heroine All-Stars when no one from the ongoing, extremely popular The Cuckoo’s Fiancee is, but no matter. Perhaps more heroines will be added later on, which is an exciting prospect: the game already enjoys quite a strong line-up.

What’s more, it may help to further the image of Weekly Shonen Magazine as a brand. Its closest rival Weekly Shonen Jump does this very effectively through mobile games and other multimedia projects, but such ventures aren’t as common for Magazine. And what better way to start than with what has been a pillar of the magazine for many decades: love comedies?

In terms of gameplay, Rent-A-Girlfriend Heroine All-Stars is described on the official website as a ‘love comedy puzzle game,’ but almost more interesting than the title itself is what kind of an effect it could have. Watch this space.

Rent-A-Girlfriend Heroine All-Stars is scheduled to launch in September 2021.