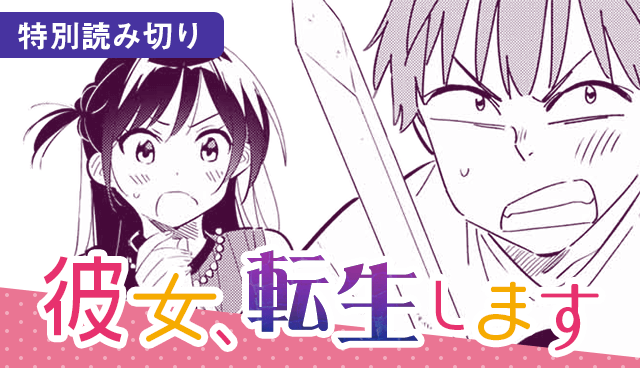 The romantic comedy manga Rent-A-Girlfriend swapped the dating world for “another world” on Wednesday.

However, manga fans shouldn’t worry about Reiji Miyajima’s series suddenly switching genres or heading off in unwanted or unexpected directions.

As it so happens, the isekai story that was published in Weekly Shonen Magazine this week isn’t part of the regular storyline for Rent-A-Girlfriend. 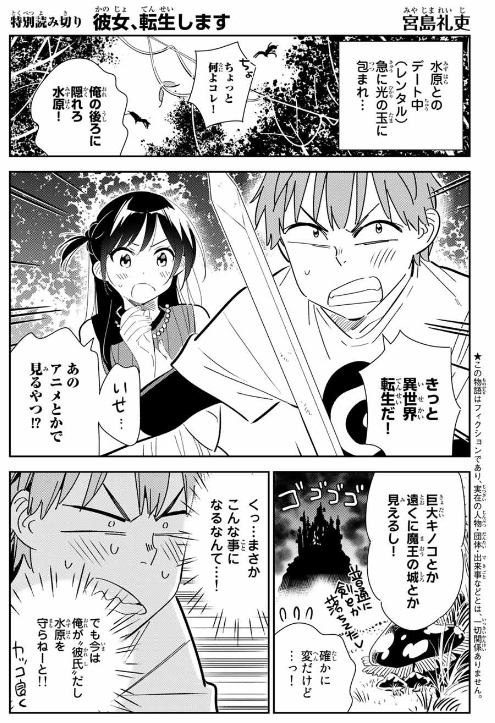 Instead, the new story is an imaginative one-off, Kanojo, Tensei Shimasu.

The title is a play on the series’ normal Japanese title, Kanojo, Okarishimasu.  Instead of being “borrowed” or “rented,” the girlfriend is now “reincarnated” (which is one of the more common ways for an isekai series to begin).

In the isekai version, Kazuya only has to deal with Chizuru, instead of the multiple girls in the main story.

Naturally, the two of them are in a fantasy situation of some sort. Kazuya has a sword, which is handy for protecting Chizuru from the rampaging slime that they encounter.

(It’s not a friendly slime, unlike a certain other Kodansha isekai series.)

You can read the short and funny spin-off here.

A Quartet of Isekai 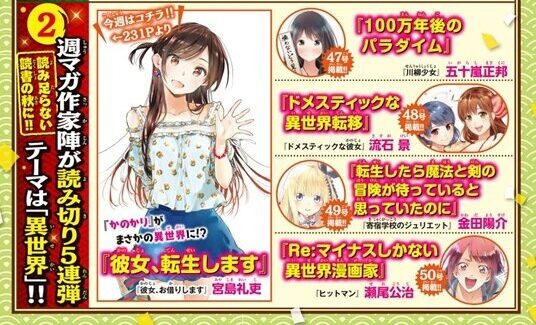 Kanojo, Tensei Shimasu will be followed in coming weeks by four other isekai-themed stories by Weekly Shonen Magazine manga creators.

Issue 47 will feature Masakuni Igarashi, creator of Senryu Shojo. His story will be called 100 Man-nen-go No Paradaimu, or Paradigm After 1 Million Years.

In issue 49, Yosuke Kaneda, the author of Kishuku Gakko no Juliet, will create Tensei Shitara Maho to Ken no Boken ga Matte Iru to Omotte Itanoni or I Thought That Magic and Sword Adventures Would be Waiting For Me When I Was Reincarnated. (This follows a tradition of isekai stories having ridiculously long names).

Issue 50 will feature Koji Seo, creator of Hitman. His story will be called Re: Minus Shikanai Isekai Mangakka, or Re: Another World Cartoonist with Only Minus.

The Re: Minus part sounds vaguely familiar (“less than zero,” perhaps?), but we’ll see …

Rent-A-Girlfriend Will Indeed Be Getting A Second Season

‘Rent-A-Girlfriend’ Sales Have Increased Massively Thanks to the Anime