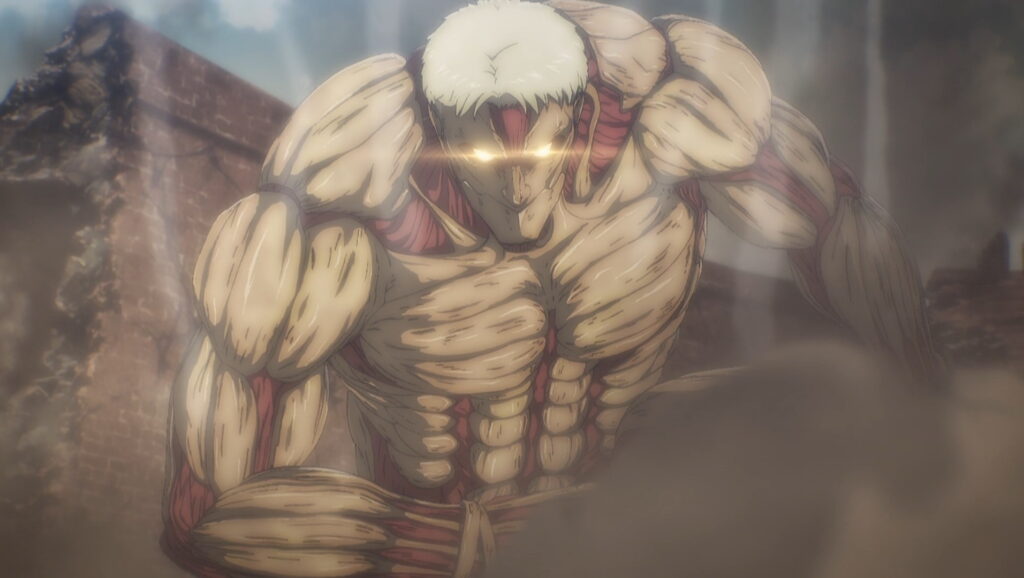 It would be no understatement to say that Attack on Titan: The Final Season episode 1 was probably one of my most anticipated releases of the entire year.

In preparation, I’ve been doing nothing but marathoning all three seasons of WIT Studio’s previous adaptations alongside reading the manga (which I picked up in favor of the anime back in 2013), and so my head is full of nothing but Eren, Titans, and the island of Paradis right now.

Attack on Titan: The Final Season episode 1, however, gets off to a less than auspicious start.

To a certain extent, this debut episode was always going to be a little bit disappointing. If you go in expecting the glorious return of Eren Jaeger and to pick up right where we left off with the Survey Corps, then you may come away feeling a bit miffed.

I’ll say right off the bat that you should temper your expectations; many of our most important main characters don’t even show up a good way into the Marley arc, with the obvious exceptions being Reiner and Zeke. 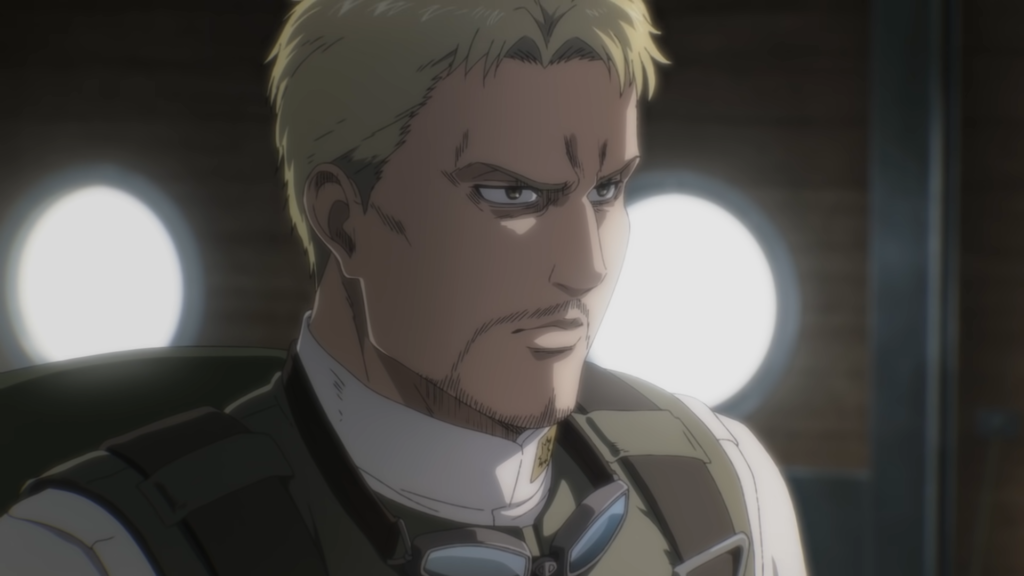 If I already knew this, then why was I disappointed? That probably has something to do with the production. While I always thought that the character designs were fine and found the 3D animation used for the Titans less aggravating than some (even though the PV made us think otherwise), the OP did not make a very good first impression, nor did it dissuade anxieties that this season was being put together at the very last minute.

Some explosions with pretty filters over them aren’t enough to distract from the fact that this OP is mostly just empty space, which makes me think that this sequence was just as an afterthought. Even if Hajime Isayama is a big fan of the band, one can’t help but immediately think back to WIT’s old OPs that always felt fully developed, even when the song was not very good (looking at you, ‘Red Swan’).

Right off the bat, then, Studio MAPPA had me a little anxious. To be honest, I’m not sure how much of my reaction to Attack on Titan: The Final Season episode 1 is informed by long-standing anxieties: the sheer lack of promotional material alongside an apparent insistence from NHK and/or Kodansha that this season must begin this year always filled me with the fear that this project was going to be rushed out the gate.

And so while the episode, on the whole, looked pretty good, I’m half expecting the entire house of cards to come toppling down at any point.

Let Loose the Dogs of War

In any case, where Attack on Titan: The Final Season episode 1 does shine, this is undoubtedly as a result of the fantastic source material.

In my eyes, the Marley arc was what pushed Attack on Titan from ‘pretty good’ to ‘modern masterpiece’ as Hajime Isayama revealed his talents as a truly compelling storyteller – particularly when dealing with the plight of the Eldians and the horrors of war.

Attack on Titan: The Final Season episode 1 takes place four years after the end of Season 3 Part 2, or nine years after the initial attack on Paradis by the Colossal Titan. In that time, Marley has managed to lose control of the Attack Titan, the Colossal Titan, the Female Titan, and the Founding Titan – although they never had direct control over the last one anyway. In any case, neighbouring nations have now noticed Marley’s weakness, and have sought to press their advantage against the once-mighty nation. 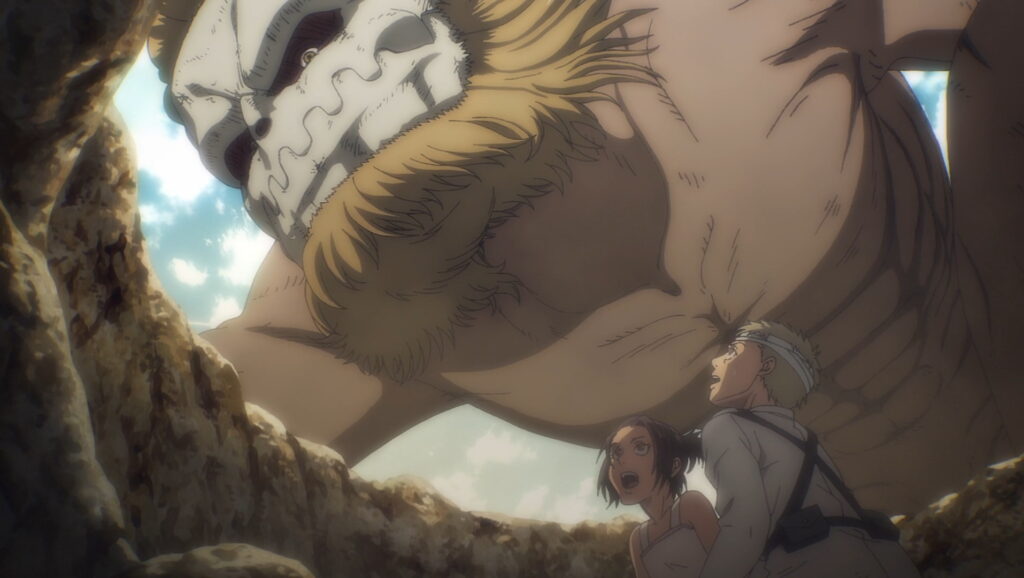 This pushes Attack on Titan even closer towards an allegory for World War One, underscored even further by the trench warfare present in Final Season episode 1. Yet, at the same time, the power of the Titans is weakening in the face of modern weaponry – one shot from the new anti-Titan cannons and they’ll lose the power of one of the Nine Titans and a Warrior all at once. The end of Marley’s domination is drawing near.

Attack on Titan: The Final Season episode 1 does a good job at underscoring this wider story development, as well as introducing us to our main new characters: Gabi and Falco. While there are other Warrior candidates who are also introduced in this episode, these two are undoubtedly the most important. We also get a chance to catch up with Reiner and Zeke, who are being forced to deal with the consequences of their own failures in taking back the Founding Titan.

Gabi is eager to prove her readiness to inherit the Armored Titan from Reiner, who is clearly sick of being alive (and walls!). This leads to the most nail-biting part of Attack on Titan: The Final Season episode 1, where she uses her own childish appearance to trick the enemy into letting her get close enough to blow up the anti-Titan armored train. This proves without a doubt her loyalty to Marley and her hatred of the Paradis Eldians – something that will become so important later on.

Speaking of the Eldians, we get a taste here of how truly hated and feared they are. Even when Falco is bandaging one of the Mid-East Alliance troops, he has no words of thanks – just ‘don’t touch me.’ Eldian squadrons are also used as cannon fodder and told to lay down their lives for Marley (despite forcing their people into a glorified ghetto). It truly is a hellish scene, brought to life well from the original manga through the use of sound and music.

When the credits started to roll for Attack on Titan: The Final Season episode 1, I was shocked to see how well-developed the ending sequence was in comparison to the OP. Does this mean that MAPPA will add things to the opening sequence later on, like they’ve done with Jujutsu Kaisen? I sure hope so.

I would be lying if I said I didn’t enjoy Attack on Titan: The Final Season episode 1. Seeing things I love from the manga come to life is always a trip, but there are several elements of the production that leave me unfulfilled. Furthermore, the circumstances surrounding this long-awaited conclusion can’t help but fill me with anxiety.

I want the best for Attack on Titan, I really do – hence why I am waiting for The Final Season to overcome those problems and pleasantly surprise me.

You can watch Attack on Titan: The Final Season episode 1 via Crunchyroll.