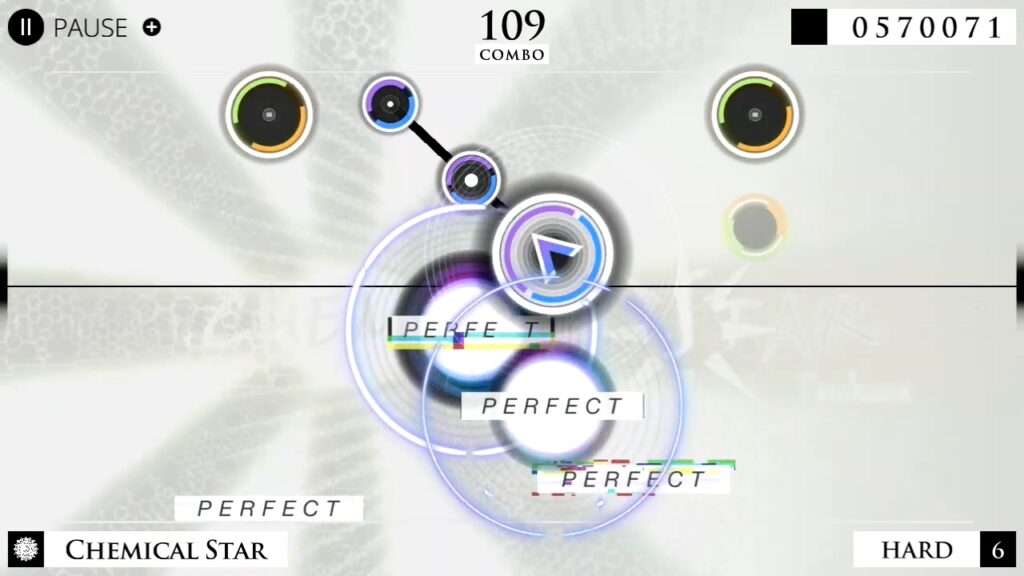 BCytus Alpha has now splashed onto the Nintendo Switch, bringing a trio of Rayark Games’ titles to the console. Thankfully, just as with VOEZ and Deemo, Cytus Alpha brings the game’s content to the Switch with a handful of satisfying additions for new players of the game.

Cytus started out on the mobile format in 2012 with a number of song packs and narratives that expanded an ongoing storyline, and 2019’s Cytus Alpha release is billed as the “definitive edition” of the game. This all-in-one package bring the game’s library of more than 200 tracks to the Switch version, an original Chapter Omega segment and a retooled interface suitable for the Switch screen.

Cytus details a future world where human memories can be stored cybernetically to allow a person to live beyond their human vessel. As time passes, memories and emotion are eventually stored in a system known as Cytus, and playing through the game’s music restores them.

The gameplay of Cytus Alpha is similar to a game such as DJ MAX Technika, except Cytus has a vertical orientation that oscillates back and forth. The songs feature notes the player has to tap, hold or drag, and, as expected, there are a range of difficulties and song tempos that keep the player on their toes.

Coming over from the mobile format, Cytus Alpha allows players to take the Switch gamepad into their hands and use the touchscreen to hammer out the game’s notes. However, this version also accommodates Switch controllers (or the buttons on the gamepad), which gives players even tighter command of the gameplay.

The controller mode was fantastic for times when I just wanted to lay back and chill out with the game, and tighter control gave me an edge on the more difficult songs. However, I was surprised at how much I enjoyed using the touch controls as well. Both methods were very responsive in my experience, and scoring rivals can rest easy knowing the game documents which control method you used on the results screen.

Cytus Alpha does place a heavy focus on performance and scoring, with a robust leaderboard and the ability to match up and score battle up to two other players online in a song. The judgment system is very lenient in giving players perfect ratings for hitting a note, but a deeper secondary system labeled TP (I’m guessing that is something like Technical Percentage/Performance) more strictly judges your timing. Thus, it’s possible to get a maximum of 1 million points on a song to get the Million Master rating, but still not have a 100% TP. I find this to be great, as it gives players a lower-hanging fruit to recognize their skill, while still giving them something to go back to for improvement.

When you look at the overall package of Cytus Alpha, it might be strange to say there isn’t much for me to review. This is because Cytus Alpha unapologetically goes all-in as a rhythm game. Gamers used to customization, tons of options and a load of bells and whistles will be thrown off by Cytus Alpha’s offerings. Cytus Alpha is so minimal, even I was thrown off at first. Still, there are positives to be had in this approach, but the mileage a player gets out of this package may widely vary.

Thankfully, what Cytus Alpha does, it largely does exceptionally well. Cytus Alpha is absolutely stacked with music that offers a couple of difficulty charts per song. The majority of these songs are unfortunately masked behind an unlock process, but, still chunks of songs and game story kept flowing organically as I played through the music tracks. Progress can also be unlocked through multiplayer wins if the player is so inclined to use that method. Bar none, the 200-plus tracks available in the standard package is the massive selling point for Cytus Alpha.

Cytus Alpha goes light on its visuals, but it still presents a number of assets that are great to look at. The menus serve up a monochromatic cyberpunk theme that largely keep the navigation clean, and the gameplay field has minimal presentation to allow players to focus wholly on the notes. The song selection menus give players the most graphical flair, with pulsating, and sometimes animated, title cards that reflect the theme of the song. While there isn’t a ton to look at overall, what is here looks solid.

The sound rings through the gamepad quite well, and Cytus Alpha serves up electronic tracks that give the game a theme while still providing some variety. I would go back to comparing the title to DJ MAX yet again in the sound category, and Cytus Alpha even has a bonus “DJ MAX” category featuring guest tracks from the series. Some notable artists such as Cranky pop up once again in this title, so I feel it’s an apt comparison to make if you are unfamiliar with the music themes of Cytus.

Cytus Alpha does feature a story, but it’s a feature that will be “take it or leave it” for players. The story follows a character through the implementation of Cytus, but it is told through static screens and computer logs akin to a visual novel. It’s a nice bonus to view on the side, but it also isn’t critical to Cytus Alpha’s gameplay.

Overall, “minimalist” perfectly describes Cytus Alpha, and I’m trying to stress that isn’t necessarily a negative. There are a few options included that allows the player to adjust the game volume, along with a couple of options that organize the note charts and provide audio feedback, but, by large, Cytus Alpha is about playing a music game.

The online portion of the game is equally simple, placing the player into a lobby where two other players can join, and the results are compared following the song. It seemed like the online competition only factored in scoring, as I’ve tied at Million Master rank with another, had a higher TP, and saw both of us were awarded a win. Still, if you really want to be competitive with TP rankings, Cytus Alpha offers leaderboards for overall performance and individual song performance, with stat listings for the player based on each chapter as well.

As a whole, Cytus Alpha seemed empty to me at first, but, the more I played it, the more I enjoyed the straight-forward focus on jumping in, playing a rhythm game and enjoying the music. There is actually a charm to the minimalist nature of the game that should keep rhythm gaming purists happy for quite a bit of time.