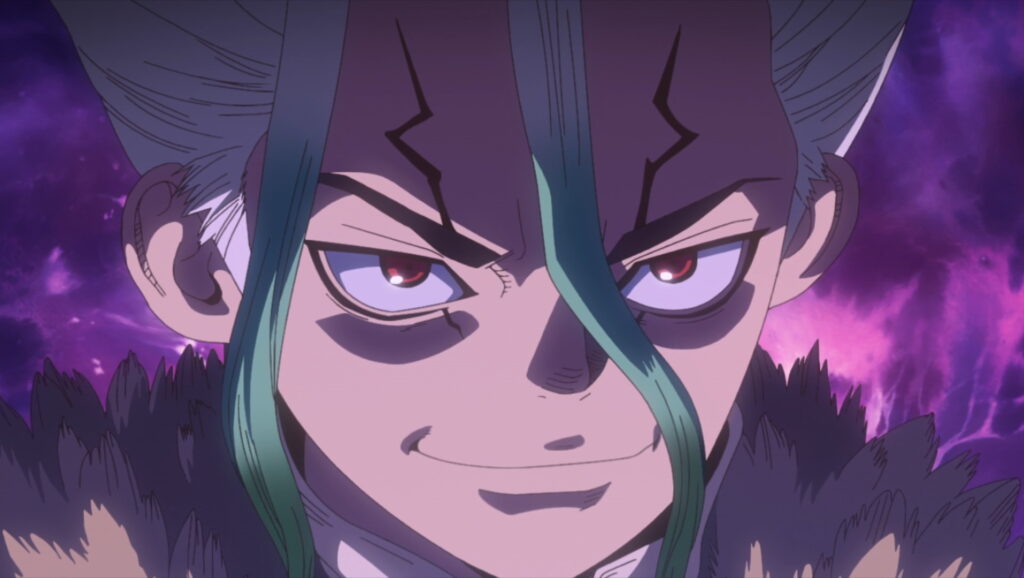 Given that Dr. STONE season 1 left off halfway through the Stone Wars arc – the conflict between the Kingdom of Science and the Empire of Might unresolved – you may expect the first episode of season 2 to get straight down to brass tacks. Not quite. Dr. STONE season 2 episode 1, or Dr. STONE: STONE WARS episode 1, whatever you want to call it, has its feet firmly planted in two camps: a continuation of season one, and the beginning of an entirely new story.

The first sign of this is that Dr. STONE season 2 episode 1 opens with a recap segment. Admittedly, this is contextualised and even ridiculed by the series itself: Gen is recounting the story of Senku’s origin to the village children, and Senku snidely remarks ‘Your super stone world foundation story was epic’. But it’s still a good couple of minutes wasted for anyone whose memory extends all the way back to the distant past of December 2019.

The Kingdom of Science then moves onto making ‘space food,’ or instant freeze-dried ramen; this is supposedly the ‘final super item’ needed to take on Tsukasa, but would’ve made more sense to round off the end of season one. Then we could actually start the Stone Wars straight away, instead of much further into the second half.

Many of these structural problems, however, come from the nature of the source material and the amount of episodes allocated to TMS Entertainment for the first season. In the original Weekly Shonen Jump manga, there was no years-long separation between the creation of the record player to hear Lillian’s songs and space food, instead proceeding in a weekly serialized format. Unfortunately, the team just had to deal with the consequences of this, alongside the fact that twenty-four episodes were never going to be enough to adapt three full arcs. I am, therefore, willing to cut Dr. STONE season 2 episode 1 a little slack.

It’s not as if these invention segments are lackluster, either, because they represent everything we love about this science shonen series: to quote Gen, ‘Here we go again! Another craft [sic] that couldn’t possibly belong in a stone world!’ The villagers’ reactions when eating cup noodles were also particularly entertaining, given they are such an integral part of modern Japanese food culture.

Coming into the second half, Dr. STONE season 2 episode 1 makes a much more concerted effort to begin the Stone Wars proper. Gen and Senku have a moonlit conversation about how they’re going to take down Tsukasa’s empire with little to no bloodshed, which Chrome ends up overhearing. This makes him an ‘accomplice’ to Senku and Gen’s underhanded tactics, leading to an interesting scene where they agree to ‘go to Hell together.’

Whether the end justify the means is a different question entirely, because what matters is that this is the beginning of Dr. STONE: STONE WARS proper. No more recapping season one, no more mopping up additional inventions from the original manga: now it’s all-out war, and it’s exhilarating.

Your thoughts on Dr. STONE season 2 episode 1 will probably differ depending on how familiar you are with the source material: if you’ve already read the manga and watched the anime as well, then it’s lingering connections to season one will probably leave you a little frustrated. Nevertheless, it’s hard to deny that this caps off as an exciting introduction, especially if you don’t know what’s coming next.

You can watch Dr. STONE season 2 ‘STONE WARS’ as it airs via Crunchyroll.