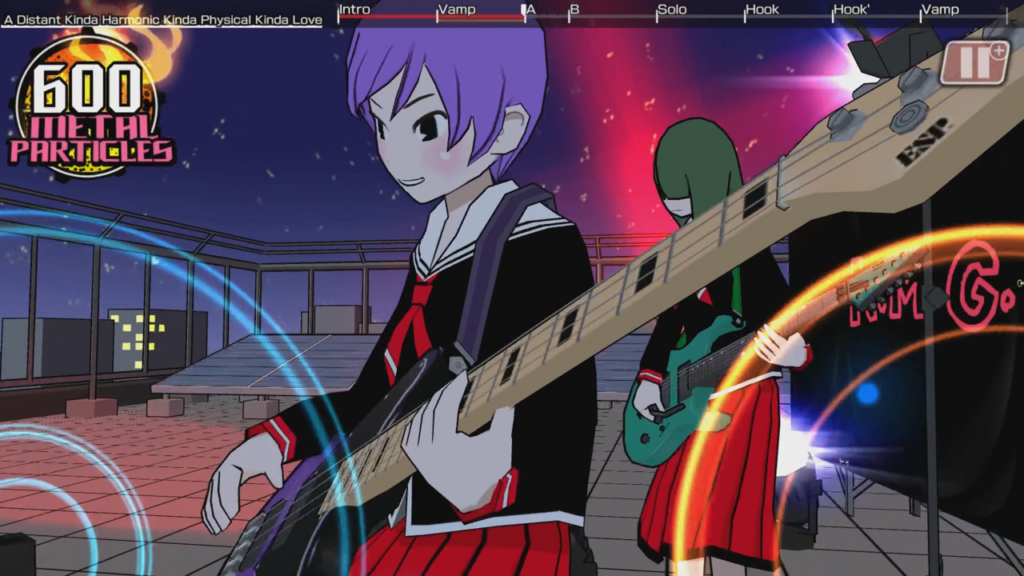 Sometimes you just wanna bang on the drum all day. If you’re not Todd Rundgren, then you can be the next best thing as the drummer in Gal Metal!

Gal Metal for the Nintendo Switch is a rhythm game where you play in a high-school girl metal band, improvising on the drums to defeat aliens. And if you thought the premise sounds strange, it only gets stranger from there.

By means of bizarre alien technology, the nameless male protagonist of Gal Metal is combined with Rinko Hoshino, the drummer of a high-school girl metal band called Kichijoji Metal Girls (or K.M.G.). Controlling her body and guided by her spirit, the two must work together with Rinko’s band mates Kia (keyboards), Mani (bassist), Shiimi (lead guitar), and Erii (rhythm guitar) to defeat various seafood-themed aliens with the sheer sonic power of heavy metal.

In this game, you drum how you please! This can be done with motion controls, holding the joycons like drum sticks, the touchscreen, or with buttons. The left side controls one half of the drums, and the right side controls the other half. By hitting both sides together, you hit the cymbals. By learning and playing various drum patterns across the course of each track, you can find the rhythms that suits you best. Different patterns work better for different track, so it’s important to keep learning new rhythms and switch it up. Don’t ignore the cymbals either; in later stages, aliens will attack the band, risking one half of the drums to be disabled for several beats. Crashing the symbols at the right time will stop the attack. 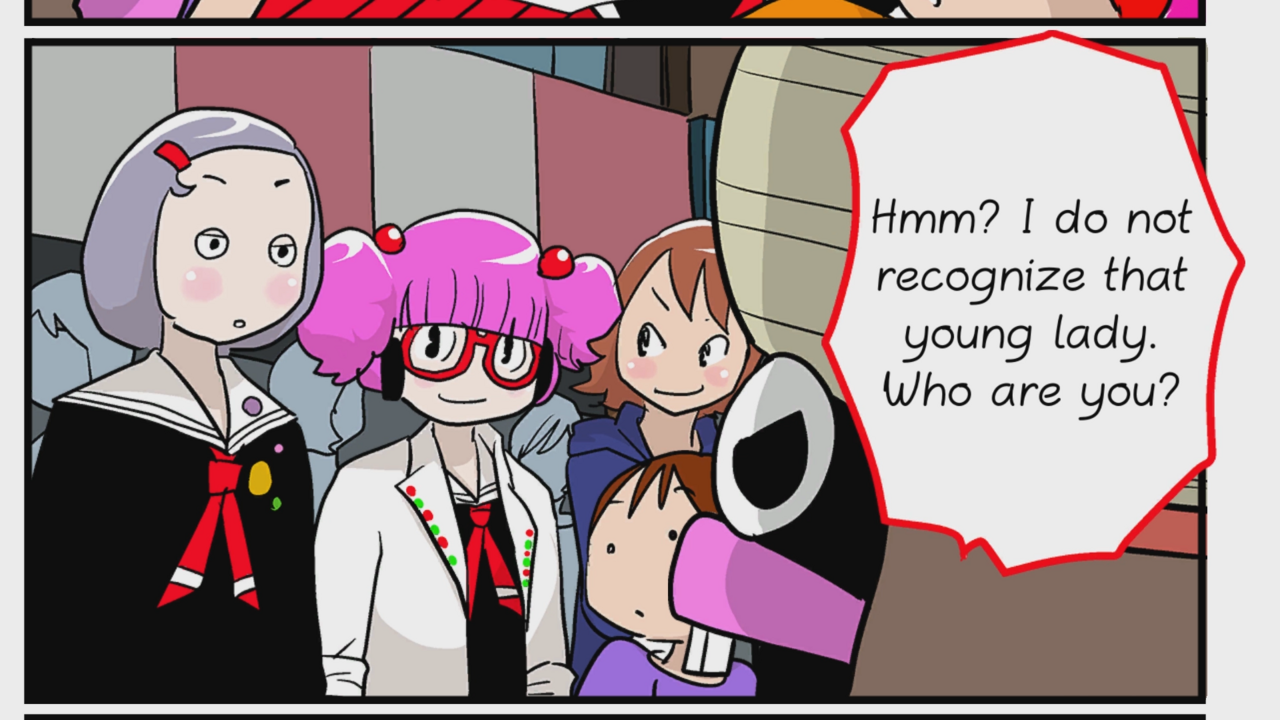 It’s not all alien fights all the time; Rinko has several days between alien attacks, where she can use stamina points to socialize with her friends, work part-time jobs, or even just space out for an hour if she wants. Completing these actions spends stamina of varying amounts, and raises one of five attributes. Those who just want to keep on beat and use predetermined patterns can grind Morality; those who want to use aggressive patterns can raise Passion; and those who want to switch between patterns often can raise Activity. And, for occasions when aliens attack the band, Guts and Kvlt are the ones to raise. For those focusing on the performances, solo and group practices let you learn new patterns and try them out before the aliens attack.

Don’t forget, you’re in a band! As you socialize, you can hang out with the other four members of the band, raising your affinity levels with them and improving the way you jam with them. As you raise your affinity levels, you can unlock short skits that develop your relationships with them. All of these parameters can seem pointless at first, but as the aliens become trickier to fight, they’re necessary to prioritize.’ 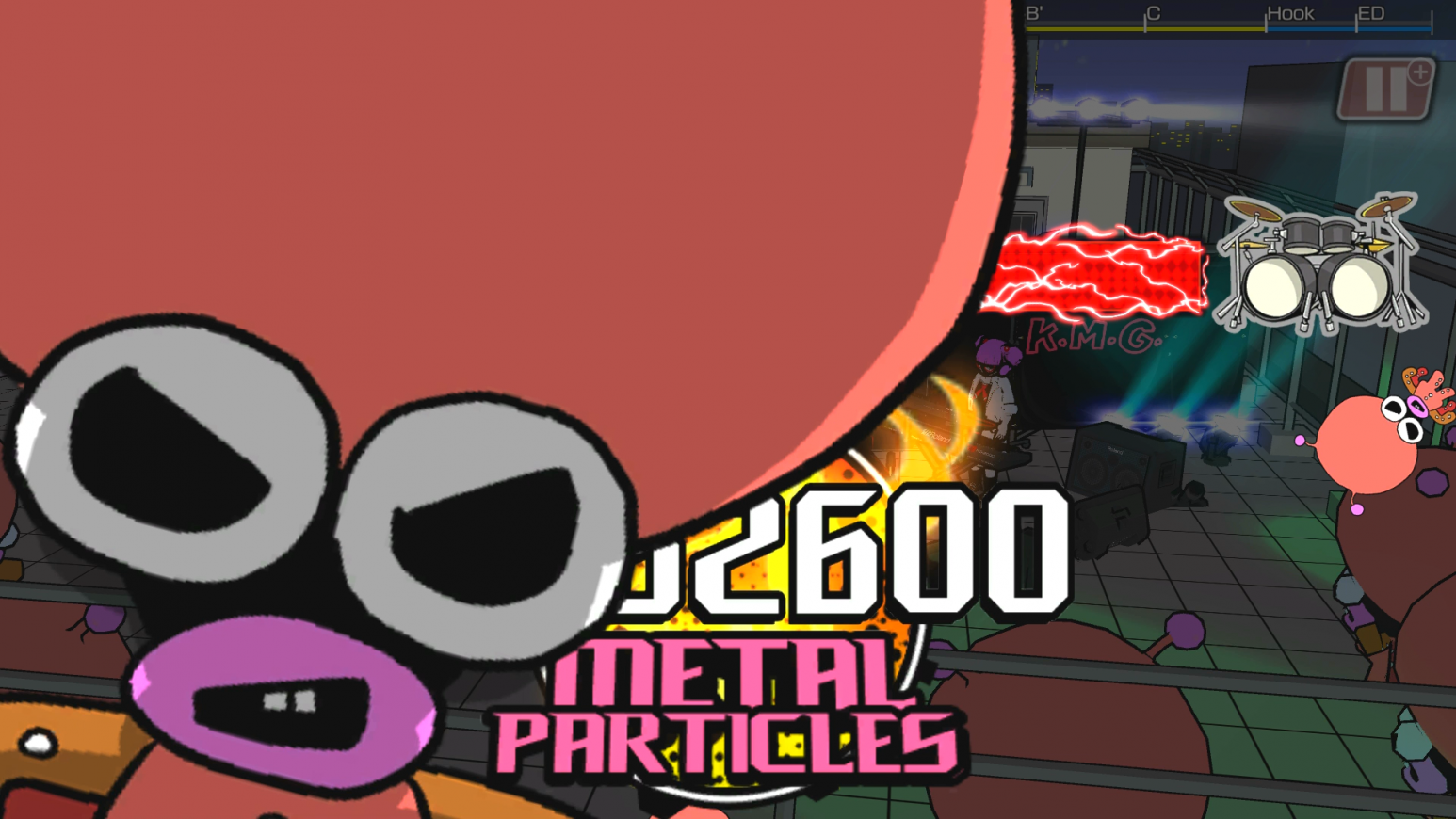 The stamina and time systems can feel restrictive, especially when the game notifies you that a new skit is available, but you’ve run out of stamina for the day. It’s also silly that practicing a single groove on your own consumes stamina, when these grooves can easily be viewed in a separate menu for no stamina cost.

Gal Metal has charming manga-style artwork, provided by illustrator Toshinao Aoki, famous for designing the characters of the anime Dragon Pilot. The cut scenes are presented in manga-format, with the player going between different panels, right-to-left, advancing with the confirmation button. The artwork is cute and expressive, bringing the girls’ daily lives in their quaint hometown to life. The 3D band stages are presented in cel-shaded style, appropriate for the tone and style of the game. Though, while playing in TV mode, the 2D artwork can look aliased and blurry at a close look, and there’s the occasional blurry texture.

The music of Gal Metal consists of thirteen rock remixes of different classical music tracks. Early stages are straightforward, while later stages amp up the tempo and the need to switch up grooves. The game’s music tracks don’t stand out too much on their own, but as you begin a stage and get into the groove of each track, it’s an infectious experience.

While the improv aspect of Gal Metal makes it stand out, it also can hamper the flow of the game. There’ll be occasions when you think you’re on beat, but your combo isn’t going up, and you’re being attacked by aliens all the while. The game doesn’t have much of a visual indicator for the beat. This means you have to pay careful attention to the music to ensure you’re playing on time with your other band mates. The game even recommends that you play with headphones attached to the Switch while it’s in TV mode, a ludicrous suggestion for most home players. Thankfully, the game more than accommodates portable and tabletop players. 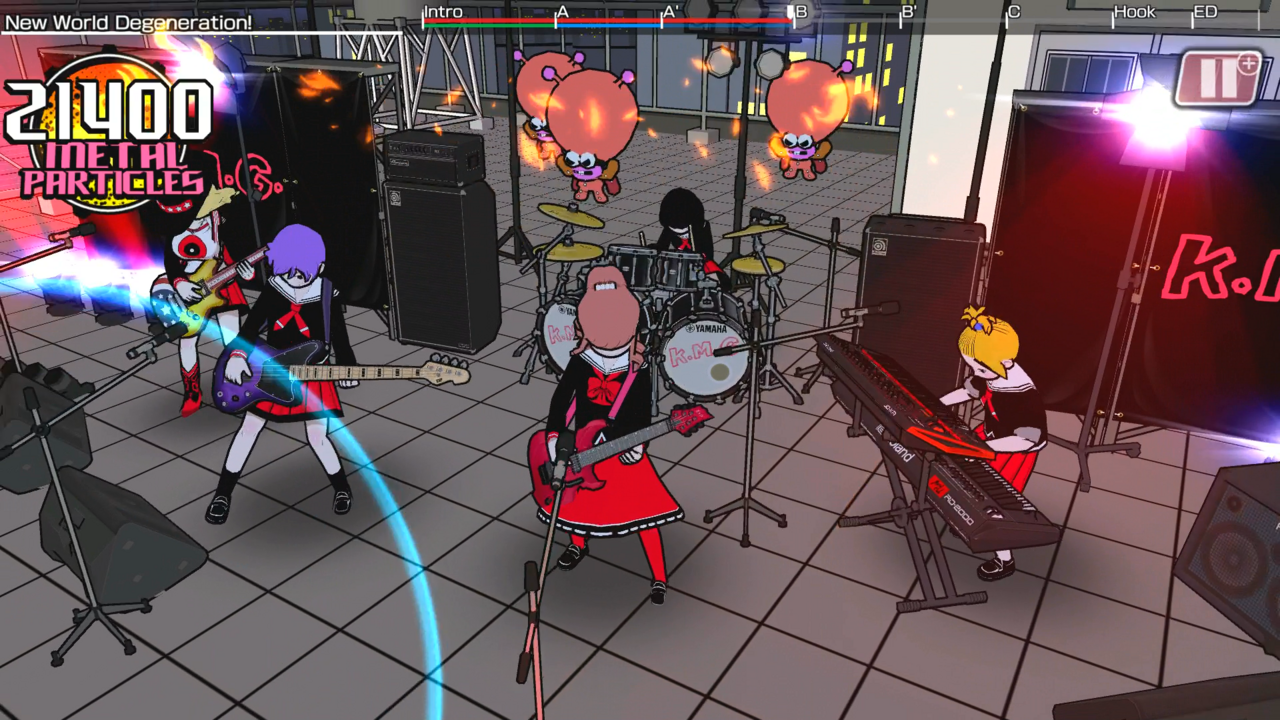 Gal Metal has thirteen stages, and the game proceeds at a brisk pace. A single playthrough of the story mode won’t take more than a few hours, at most. In free-play mode, you can play any of the stages as much as you want, which is necessary if you want to beat all of the challenges and collect all of the 400+ achievement badges; these badges range from performing a certain groove a particular number of times, to earning high ranks on tracks.

Keep in mind that the physical edition, aka the World Tour Edition, contains the Encore DLC, which has five additional band members, their own stories, and five accompanying tracks. Those buying the eShop version will save $10, but they will have to buy the Encore DLC separately.

Gal Metal’s story emphasis makes it stand out among the average game released in the rhythm-game genre nowadays. It hearkens back to an early-2000s music game, released at the height of the music game craze, where the crazier the game was, the better. It’s not all 100% zany all the time; as you socialize with Rinko’s friends, you get to know their ins-and-outs and why they got into heavy metal in the first place. While a little cliche at times, Gal Metal certainly lives up to the heritage of Gitaroo Man, Parappa, and other classics. If you liked those games, then I’m sure you’ll like the hi-jinks of K.M.G..