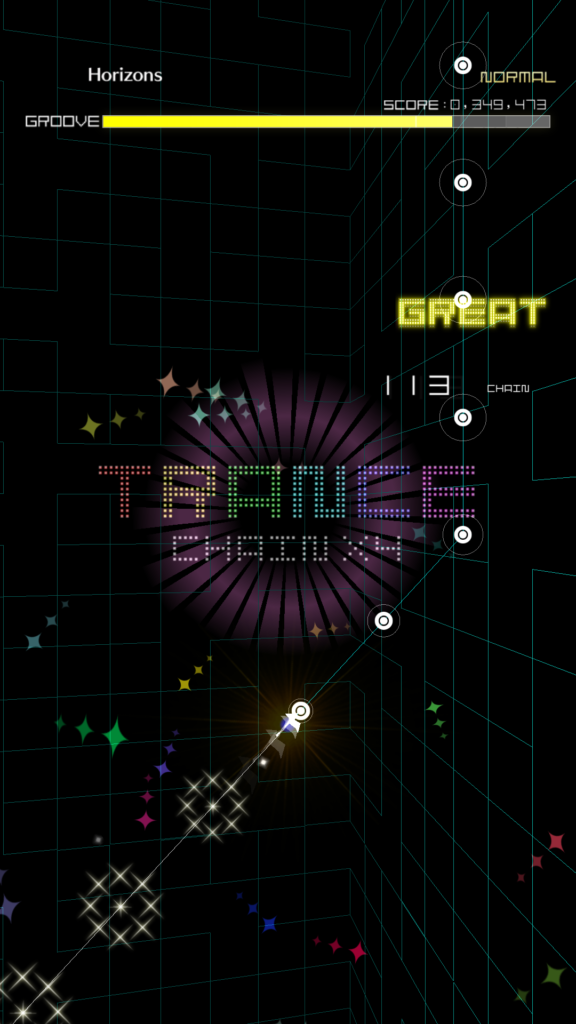 I was lucky enough to play Groove Coaster in person when I visited a little arcade awhile ago in Akihabara, Japan. The game was one of the most fun arcade experiences I’ve ever played, where a massive vertical monitor displays notes on a tunnel as your avatar passes through a trippy 3D environment, and you have to play the track as you go.

It also had a massive songlist spanning all sorts of genres, from Taito classics to doujin tracks to even licensed tracks from other games like Danganronpa & Crypt of the Necrodancer. There’s also the bright and cheery announcer who happily greets you with this charming bit of Engrish: “Let’s Groove Coaster!”.

Unfortunately, when I came back to the states, I realized there was a huge lack of Groove Coaster in my life. You can probably count on one hand the number of arcades in North America that have a functional and easily accessible machine, and it’s an experience that definitely lends itself to a full size cabinet. 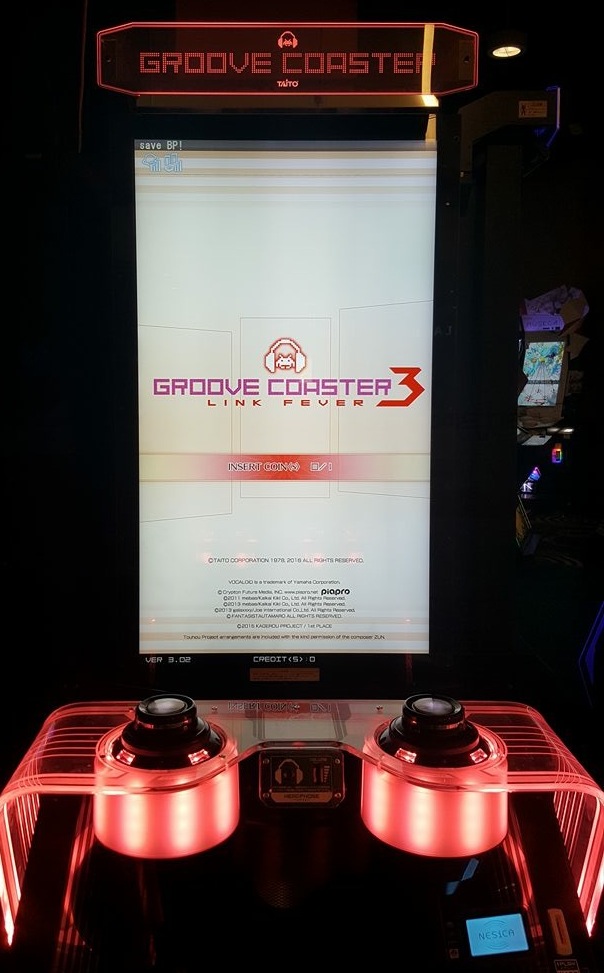 This isn’t to say Taito didn’t try to replicate the experience for the global market. I was briefly overjoyed to find out that there was a mobile version for Android phones, but I was quickly disappointed to learn that it was a free-to-play experience that had almost none of the amazing songs I played in Japan. Most of them had to be unlocked via progression, a typical F2P staple.

Thankfully, there’s now a version that’s available on something other than phones.

The long-awaited Groove Coaster for Steam version has the announcer, alright. She’s even dubbed with an appropriately cheery voice, though it now has a far less Engrish-y greeting of ‘Let’s Play Groove Coaster!’. There’s even an option to choose between English and Japanese text, as well as your preferred voice for Linka, GC’s mascot.

This was honestly probably the best part of the experience for me. 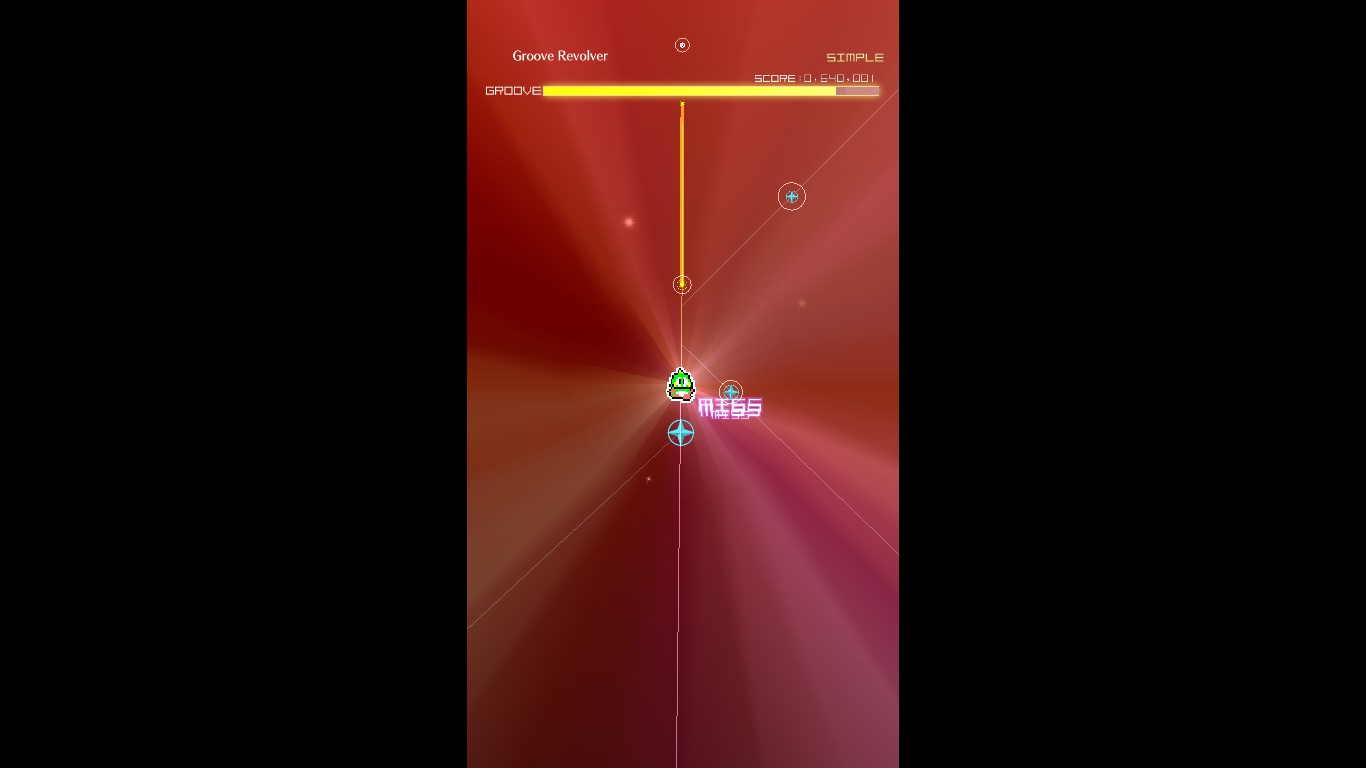 Groove Coaster is still a lot of fun, but it’s now been resigned to a keyboard interface, which simply isn’t as fun as it was in the arcades.

It’s a perfectly functional way to play, of course, but it isn’t as intuitive as Groove Coaster arcade was. I often would miss the sideways (‘slide’) notes due to getting the controls mixed up. Still, it’s probably the most acceptable method they could manage. There’s also controller options, and I imagine the game lends itself far more to using analog joysticks, but I was unfortunately not able to get either a PS4 or Xbox 360 controller to operate in game via simple plug and play. At least for now, there’s going to be some tweaking involved if you want them to work. 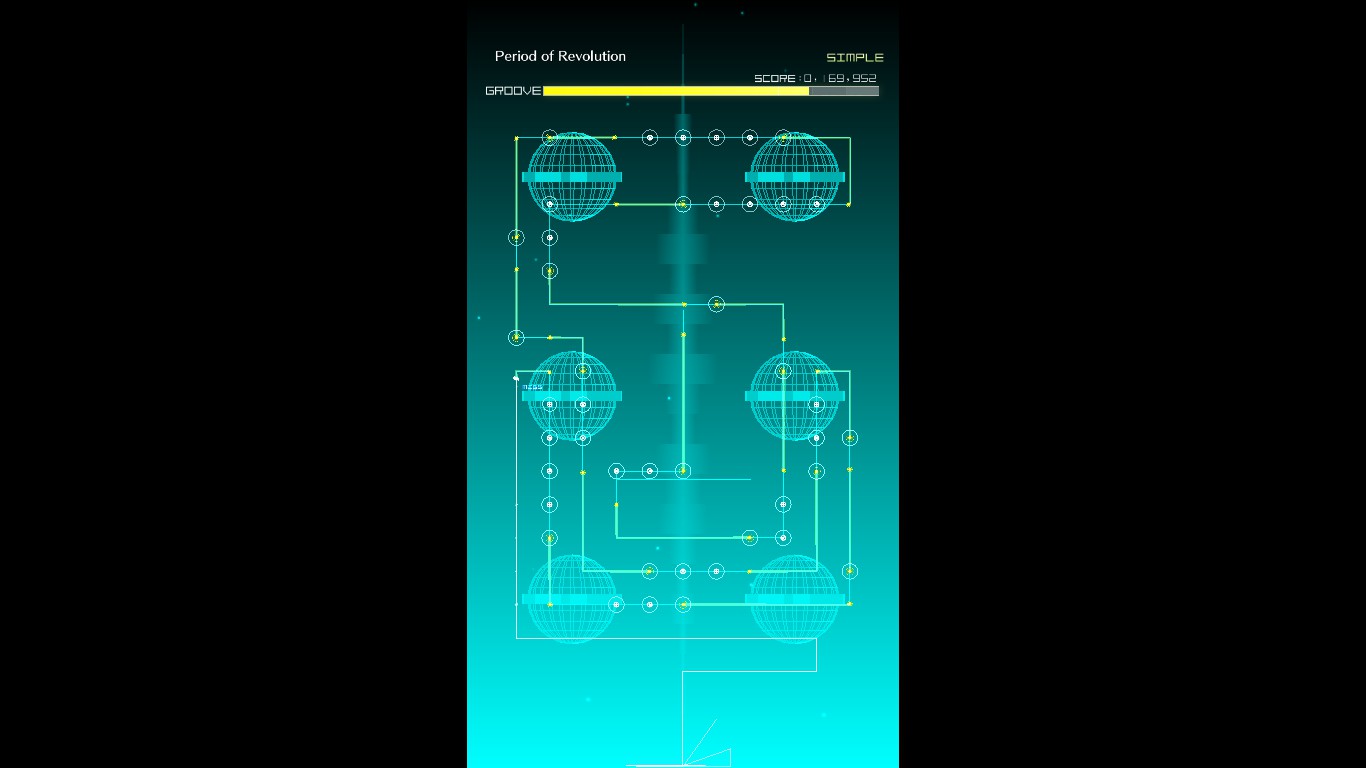 What about the game itself? Despite the inferior control scheme, it’s as fun as ever. Groove Coaster has visuals that are equal measures innovative, trippy, and engrossing. They even change from song to song, so you rarely see the same kind of visual twice. Several songs also change the player’s perspective throughout the stage, so notes can appear from in front of, below, above, or even be seen from an overhead angle.

Any fan of classic Taito tracks will be right at home with Groove Coaster, as their in-house group Zuntata were the main composers. 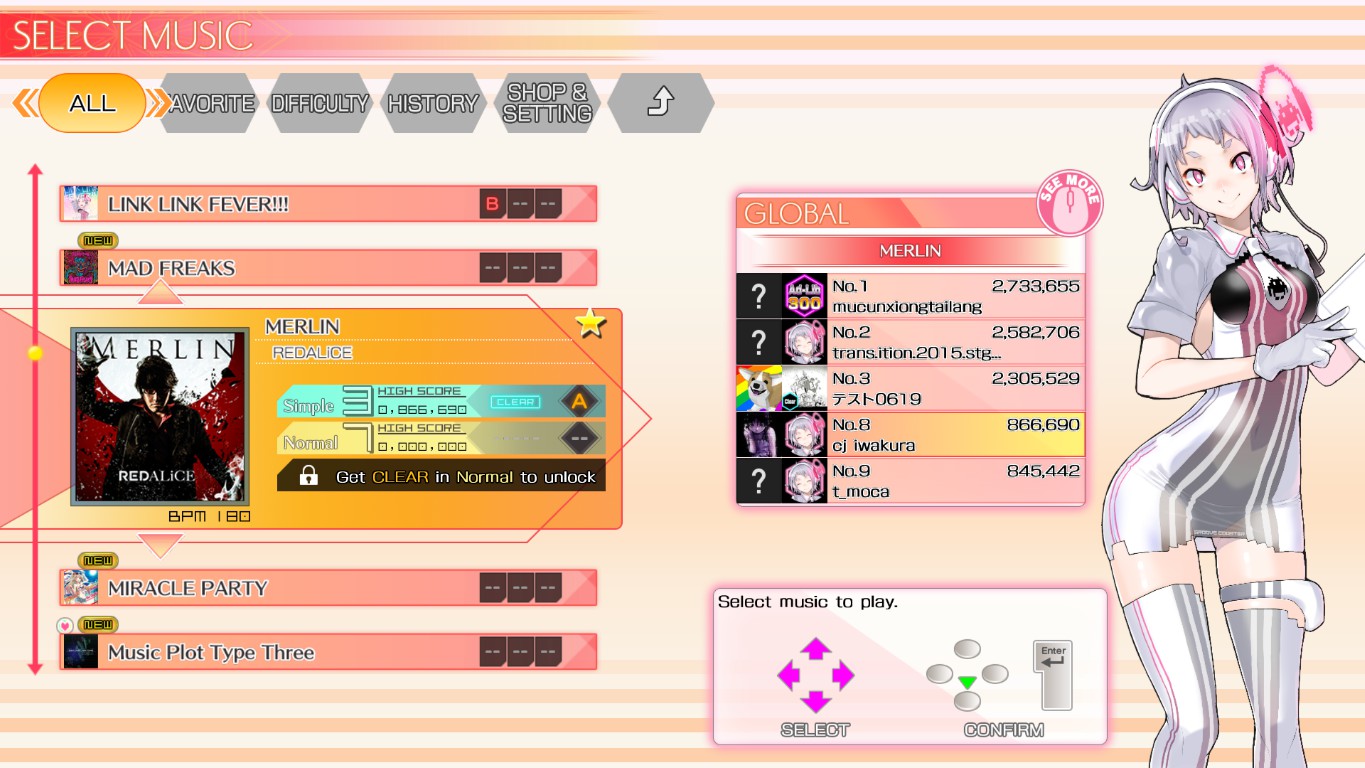 Here’s the biggest problem: Groove Coaster‘s song list is a pale shadow of the massive song list seen in the arcades. There are 31 songs available at the start, and 4 to unlock. I barely recognized any of them. 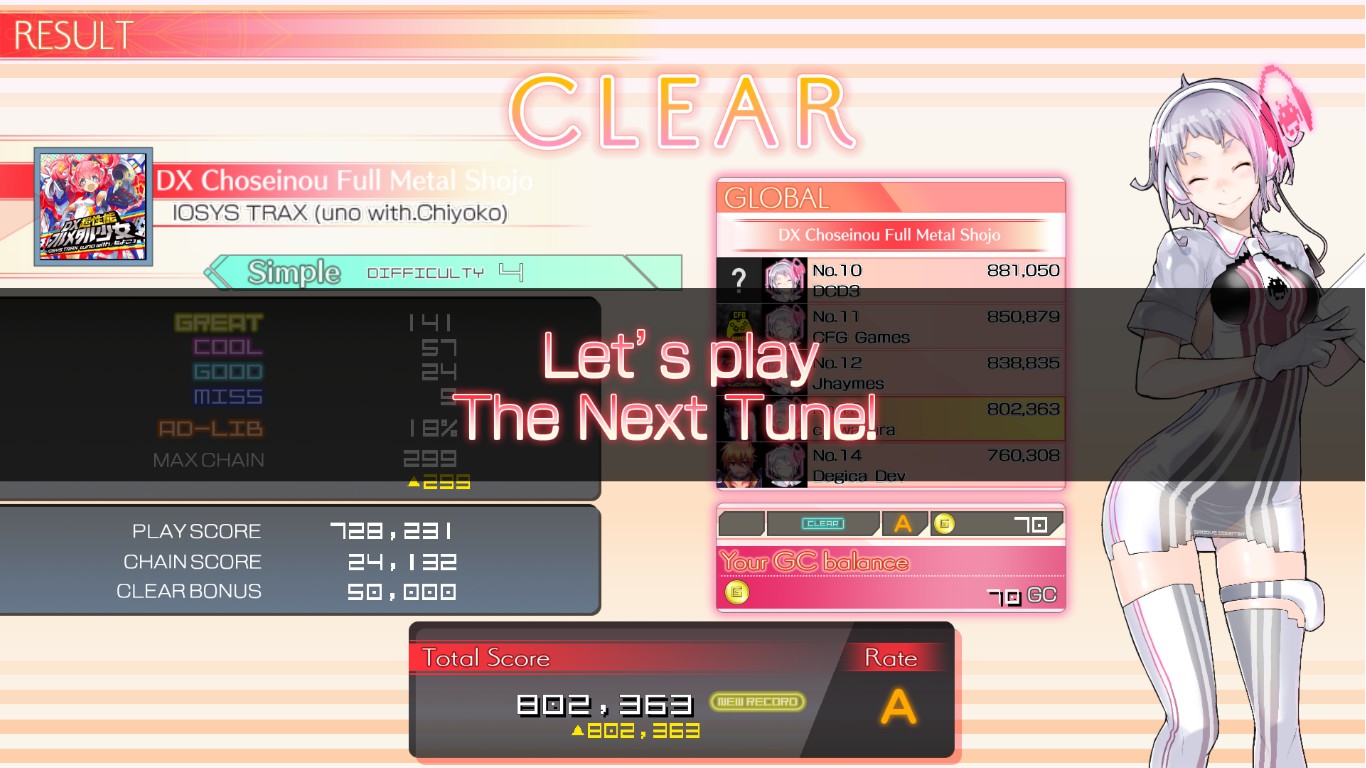 While there are some incredible standout tracks, namely from doujin music legends like REDALiCE and IOSYS, and even BEMANI veterans Sampling Masters AYA & Sampling Masters MEGA, there’s several baffling no shows. I didn’t see a single track from Darius, Space Invaders, or countless other Taito classics, which were in abundance (and still are) in Groove Coaster at the arcade.

There’s doubtlessly plans to expand on this song list using DLC, which is nice if you only want certain songs, but a huge disappointment if you plan on buying this expecting a complete arcade experience, which Groove Coaster for Steam sadly is not. 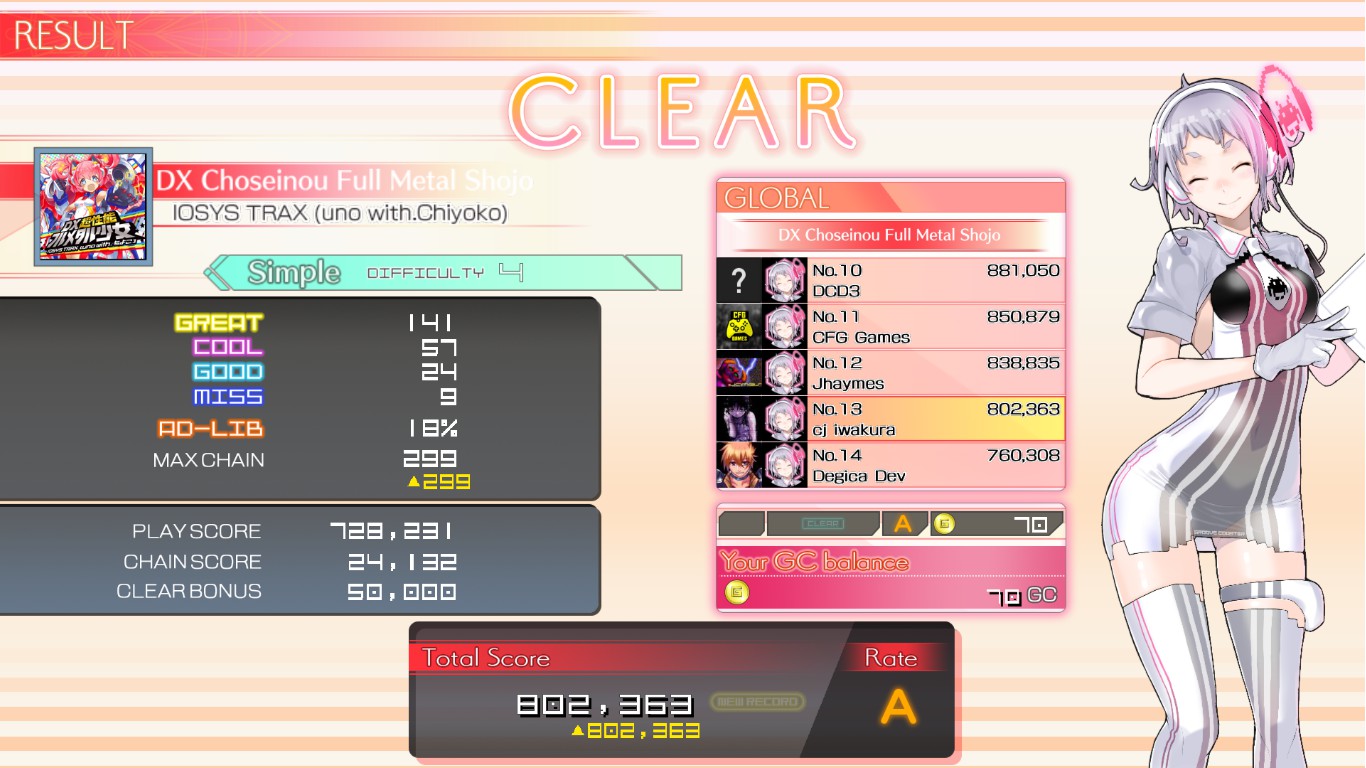 Credit given where credit due: Taito added about as much to the experience here as can be expected. There’s leaderboards for each song, a wide variety of graphic display options such as 16:9, 4:3 and 1:1 aspect ratios, and several unlockables for avatar and gameplay customization, but the music is what makes the game, and at present, it’s sorely lacking. The game has 4 modes including the standard arcade play, recent play, recommended, and nonstop(allowing you to choose 10 songs to play back to back), but none of these offer much replay value. A mission-based challenge mode would have added a great deal.

Make no mistake, Groove Coaster is a fun experience, and there’s a lot to enjoy simply from playing the game and basking in the atmosphere… it’s just not all it could or should be.

But hey, there’s always Japan or your local Round1.