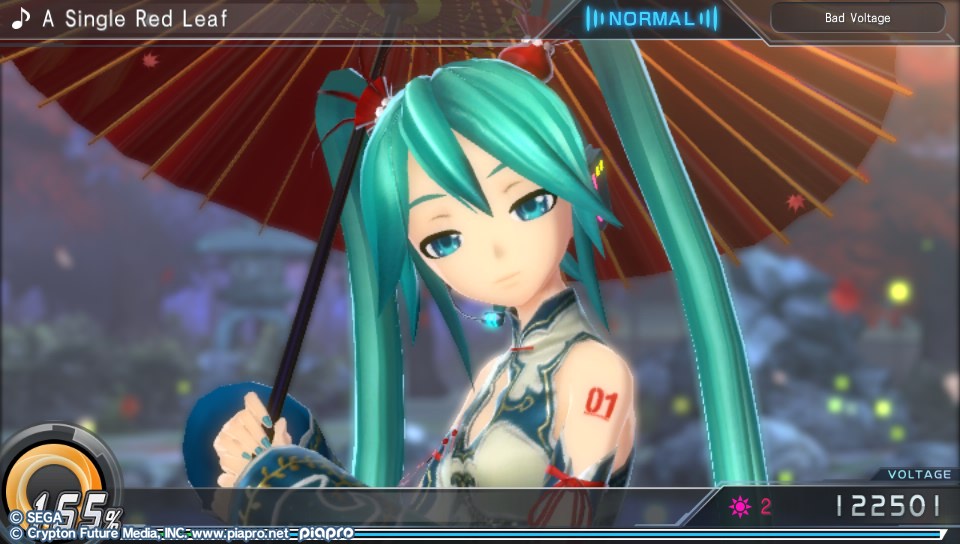 Project Diva X is the latest entry in the long-running series based on the beloved Vocaloid icon: Hatsune Miku. X doesn’t do much to change the preexisting formula, but definitely adds some new layers to it. Some good… others, not so much. Anyone who’s played a Miku game before will be sure to feel right at home before much time passes. Pick a song, watch the notes rain down(or up… or sideways…), hit the appropriate button, and the beat goes on. Fail, and you’ll have one disappointed Vocaloid on your hands. Possibly several. The biggest, most drastic shake-up to X? A story mode. The silly plot doesn’t boil down to much more than ‘let’s revive the world with song and dance!’, just with the ever-popular Vocaloid cast there to give it personality. That’s honestly the problem. The previous localized releases, Project Diva and Project Diva F respectively, wasted no time in getting to the heart of the game. Hitting notes to a beat. Sure, you have to play songs to unlock more, but that comes with the territory in a rhythm game. Sitting through lines and lines of text to get to the next song, not so much. It might be fine if the story was done along with the presentation, as with Space Channel 5 and Gitaroo Man, but Hatsune Miku X decides to go the visual novel route, which seriously drags the game way down. Of course, if you have any attachment to the characters, you’re bound to have some enjoyment out of the ‘story’, but this is no dramatic RPG or plot heavy visual novel. These are basically little more than paper thin pop stars, and their personalities are best enjoyed in small doses. They, in no way, provide the necessary basis for a gripping plot, or any plot at all. You can probably guess every beat of the story just from the screens I’ve attached, and not miss a thing. Now putting that aside, the game is also tied to ‘worlds’. To unlock new areas, each song in an area must be cleared. Clearing here meaning ‘Attaining Voltage’. Which really just means getting a pass. If you fail, you have to start over or pick a new song. Sadly, each world is limited to five predetermined songs, followed by a medley of several tracks(such as in Nintendo’s Rhythm Heaven series). The gameplay is unchanged and as addictive as ever, but the linear progression can feel very limiting. It technically has little difference from the previous games, but the story mode makes unlocking new songs feel more tedious than it normally would. There are also several ‘choices’ offered to the player, but they make no real difference. Picking the wrong choice often results in a ‘but thou must!’ stare contest if the player dares to select an option that might prevent the story from continuing, such as telling Miku you’re not interested in having her as a partner(you monster). The new story format also brings another noteworthy change. Each song is no longer accompanied by a elaborate music video, but by the dancer/s moving along to the track of choice on a predetermined stage. The songs all have track-specific choreography and camera angles, except the general vibe is much like playing DDR Supernova and watching a character move around in front of a generic background. While there are several different stages with their own unique flair, and the developers did a great job of giving each track stand-out choreography, it isn’t quite the same as the frantic and hyperactive videos of the past games. Some might prefer the stripped-down presentation in X, but I felt that the flashy videos of the past were definitely missed. An interesting change is that clearing the bonus segment of each song will result in a guaranteed unlock of a new module(or outfit) for the Vocaloid sued for the particular song. This is a nice change from having to rack up lots and lots of virtual money to buy things with. Instead, reaching higher grades will mean better rewards, such as accessories, gifts, and collectibles. Putting the assorted faults aside, a Miku fan will find hours of things to do. Unlocking every song, and all the difficulties, will take a significant amount of time, not to mention the ever-present side modes. Much like earlier games, the player can build relationships with their Vocaloid of choice by customizing their appearance, their rooms, and providing all sorts of gifts and fashion accessories. Miku X is a solid release, and offers plenty of value for a long-time fan. But for anyone new to the series looking for the best place to start, this isn’t it. Look into the first US release, or the even bigger Project Diva F release. Only come to X if you want to experience something totally different from previous entries. X can’t be faulted for trying to innovate, but sometimes, it isn’t necessary to improve on perfection.
This review is based on a free review code provided by Atlus & Sega.

This did not in any way influence the reviewer’s opinion of the game or its final score.