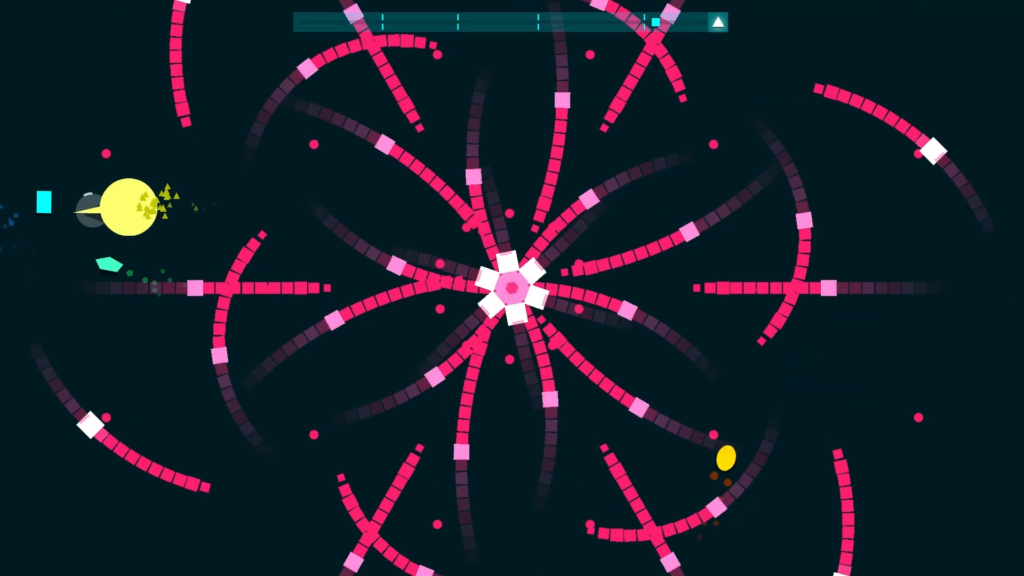 If your eyes are straining from thousands of polygons moving on-screen in real-time 4K 60FPS, then Just Shapes & Beats is the perfect, pulsating palate cleanser.

Just Shapes & Beats, by the three-person developer Berzerk Studio, is a musical dodge-’em-up where up to four little shapes have to survive an onslaught of rhythmic obstacles until the end of each stage. This basic premise forms the basis of the story mode, as well as the challenge and party modes. 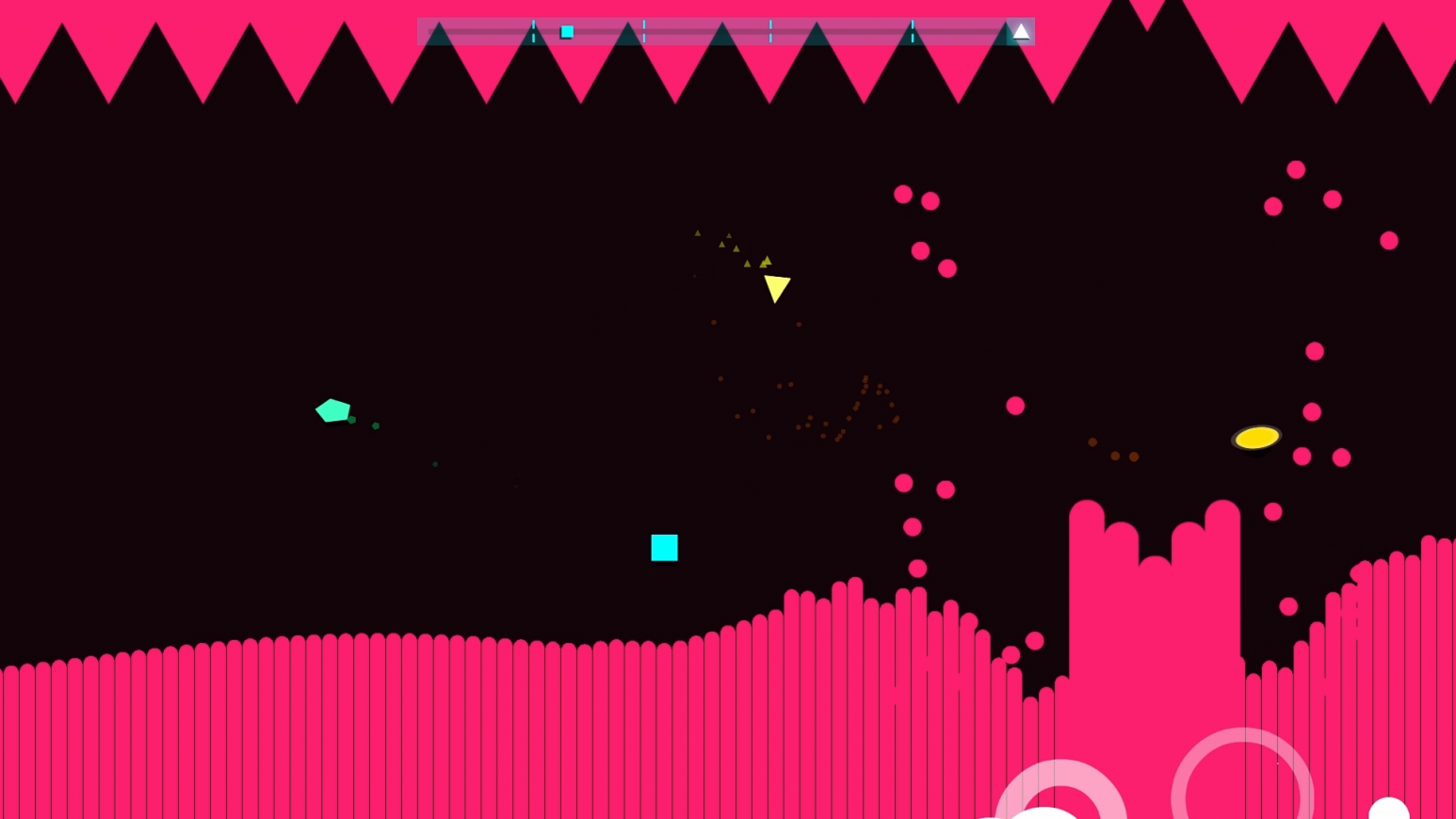 The story is simple; a red cat-like beast invades a world of peaceful shapes and conquers its main power source, mythical triangles. The four main shapes must work together with the innocent denizens of the world to reclaim the triangles and restore the balance of the world.

Just Shapes & Beats is an active, but passive game. The player-shapes cannot fight back, but they can move in all directions, as well as dash in any direction, in their quest to reach the triangle at the end of the stage. The player-shapes have a limited number of hits before they return to a checkpoint; most stages have about three to four checkpoints, but boss stages have no checkpoints. The majority of stages don’t exceed two to three minutes, so it never feels too frustrating. Even then, there is a “casual mode” that doubles player HP for a more breezy experience. This can be helpful when playing with friends.

Multiplayer is the clear focus of the game. The same general rules apply, but if a player loses all of their health, another player can rescue them, assuming they don’t float off the screen first.

Solo, the game is still a good time, though it feels like dancing alone in the middle of a club. Those looking for people to play with can drop into online multiplayer rooms and play with random people or online friends. 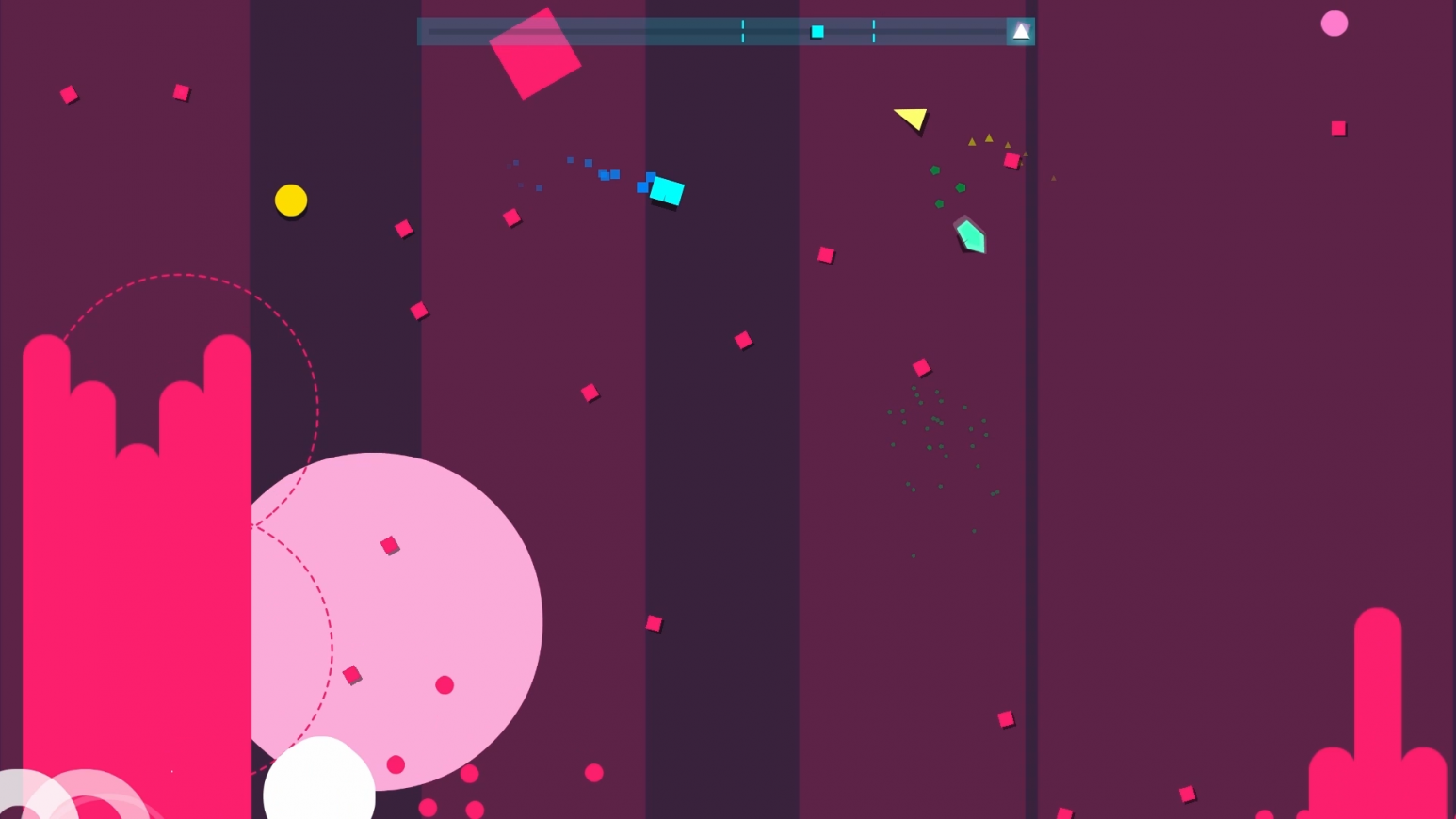 The story mode can be beaten in a couple of hours. The challenge mode contains more content. Players face off against three random stages (even ones not yet unlocked), voted on by the group, and a boss fight to top it off. For those looking for simple fun and none of the challenge, the party mode gives all the players invulnerability and puts the whole game’s stage offerings on shuffle.

Visually and audibly, the game excels. The visuals, by team artist Em, are simple, but well-animated and full of personality. It’s amusing to see how hard the main villain of the game tries to destroy the player-shapes, its face contorting and grimacing as it swings its spiky arms around. The soundtrack leans on the chiptune-y side, featuring many artists made famous through the Monstercat netlabel. There’s a good mix of aggressive and chill tracks, which pair well with the aesthetics of each stage. The game has an upbeat, uplifting tone that encourages the player to never give up.

The game is challenging, with many stage elements requiring memorization to dodge. Still, the game never feels unfair, and rewards coordinated play. It’s a blast to play with a group of friends all trying to survive together.