Review: Me & Roboco – How to Slam Jump References and Win Hearts 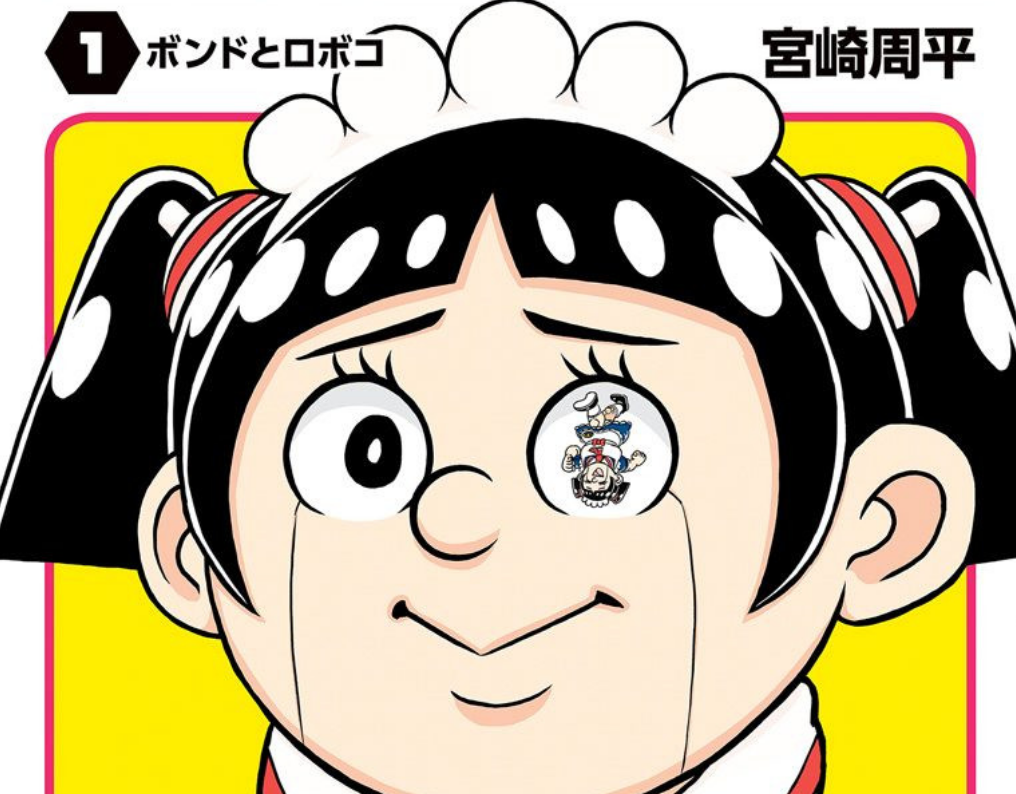 Me and Me & Roboco got off on the wrong foot. When it first launched back in July, it came among a deluge of comedy series that threatened to disrupt the delicate balance of Weekly Shonen Jump’s line-up and endanger its long-term future. Since then, however, many of those series have come and gone, giving Shuhei Miyazaki’s series more room to breath and develop, winning over many hearts along the way.

What’s the secret? Making a bunch of Jump references, it seems.

Since the beginning, Me & Roboco has never made a secret of wearing its influences on its sleeve. Roboco was pictured in the very first chapter reading Jujutsu Kaisen and exclaiming ‘Domain expansion?’, after all, but this has come to a head recently: chapter 23 was a full-blown parody of The Promised Neverland, while chapter 24 saw our characters meet several famous mangaka. This is a tactic that has its fair share of potential drawbacks, as we shall see, but has succeeded in getting readers such as myself on board. 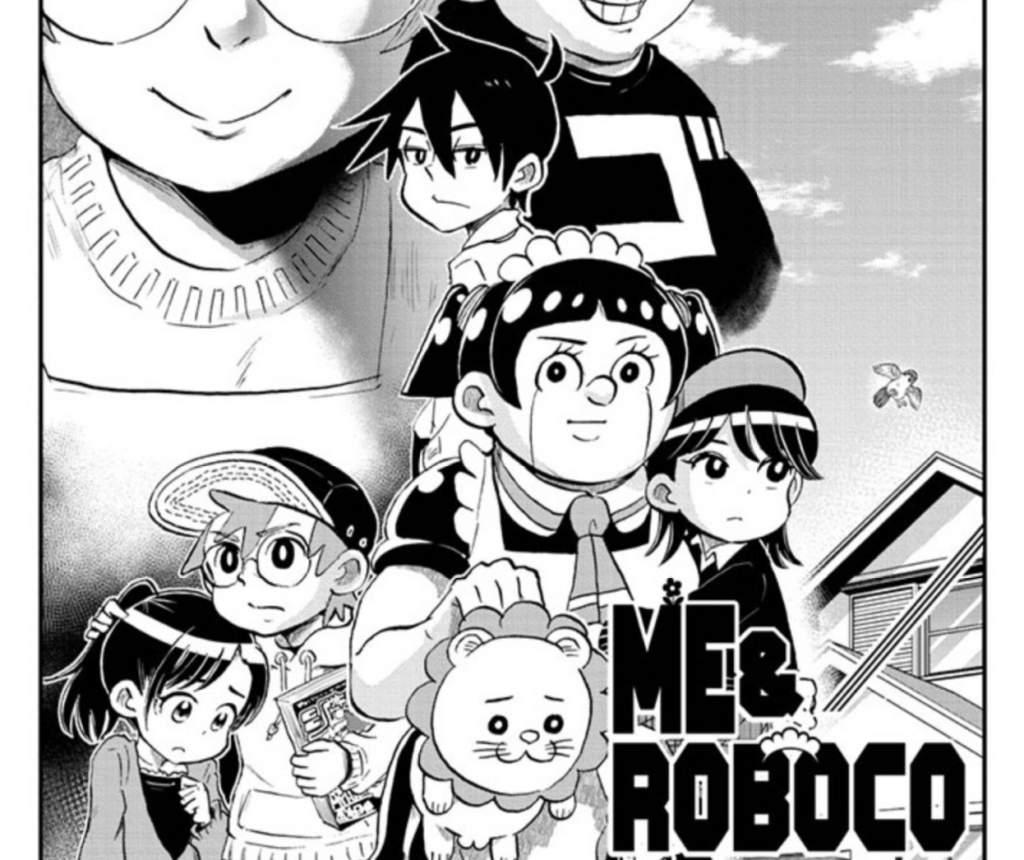 In shifting towards more overt real-world references, Shuhei Miyazaki has embraced not only his past as a parody author but also the passions of the reader. As the creator of The Parodied Jokeland (Oyakusoku no Neverland), he knows how parody works and how to make it land. That series, however, is intended solely for those familiar with The Promised Neverland; Me & Roboco is a lot more general.

As readers of Weekly Shonen Jump, we are familiar with the other series that run in it and can’t help but compare them to one another. I do that exact thing every week when I cover the latest chapters as part of my Jump Time column. Me & Roboco therefore taps into something that hasn’t been explored perhaps since the golden age of Gintama, or before it went into its endless ending cycle: the Jump parody, or the self-aware Jump manga. It also makes us laugh, because we know exactly what it is talking about.

In many ways, the titular character of Roboco mirrors that of the reader. As a passionate Jump fan, one who can’t help but ‘ooh’ and ‘ahh’ while reading the latest chapters, do we not see a tiny bit of ourselves in her? I know I do, because I often let out sighs of despair or cheers of joy whenever I read a particularly tough chapter of Chainsaw Man or a triumph in Dr. STONE. This allowed me to form a connection with the series over time, even though we may have gotten off on the wrong foot.

Nevertheless, some problems remain. Firstly, references only get you so far, and don’t make up for good writing. Use them too much, and you may also come off as a little desperate (‘How do you do, fellow kids?’). Not every chapter is also, admittedly, perfect, with some of them passing by without much fanfare. 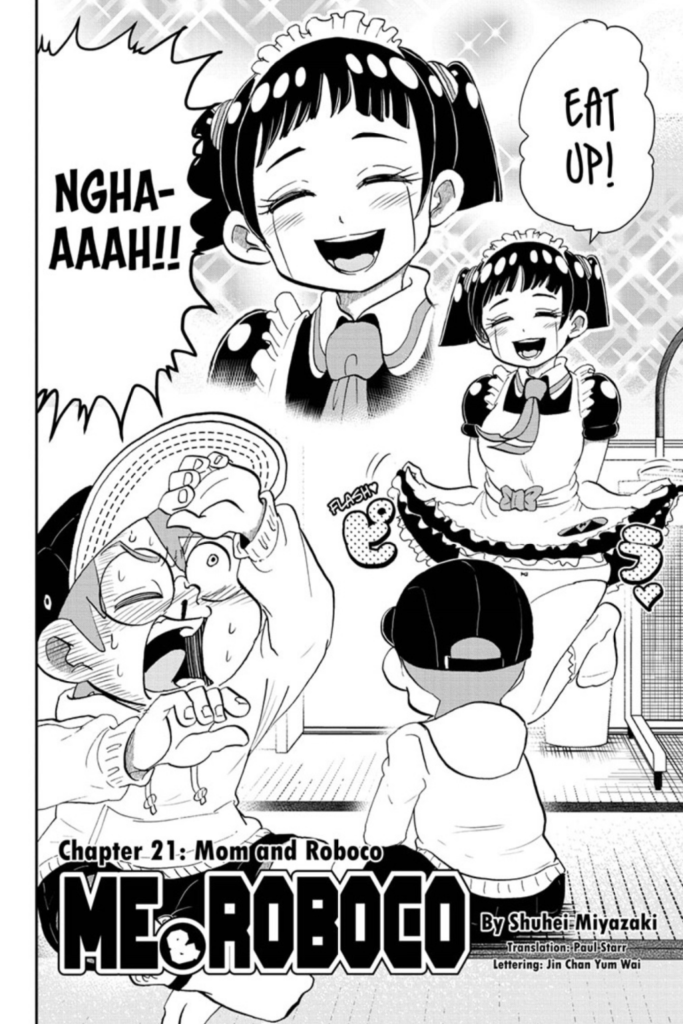 Take chapter 21, for example: this one had completely slipped my memory until revisiting it, and for good reason. It’s about Roboco using up all her energy and becoming scrawny as a result, meaning that she’s more attractive to the main human protagonist, Bondo. This is a bit weird in and of itself given that Bondo is meant to be a grade schooler, but there we go. What follows is typical slapstick gag manga fare, with some of the robots that Roboco bested in a previous chapter coming back to take advantage of her weakened state.

The shining light in Me & Roboco chapter 21 is, however, Gachigorilla. He comes to save the day and his friends from a highly advanced death robot by using a surprising amount of strength for a middle schooler, which is pretty funny. Here, we come to perhaps one of the most bizarre and surreal aspects of the series: the side characters. To be honest, I’m not even sure if this is a positive or a negative (it’s sometimes both?) but it does provide an endless source of entertainment for the reader, if only out of sheer confusion.

Gachigorilla, as mentioned, is prepared to do anything for his friends. This is hidden, however, behind a smug exterior and a tendency to berate before giving way to compliments. Taken alongside Motsuo, he appears at first to be one of Bondo’s bullies, but turns out actually to be very kind. 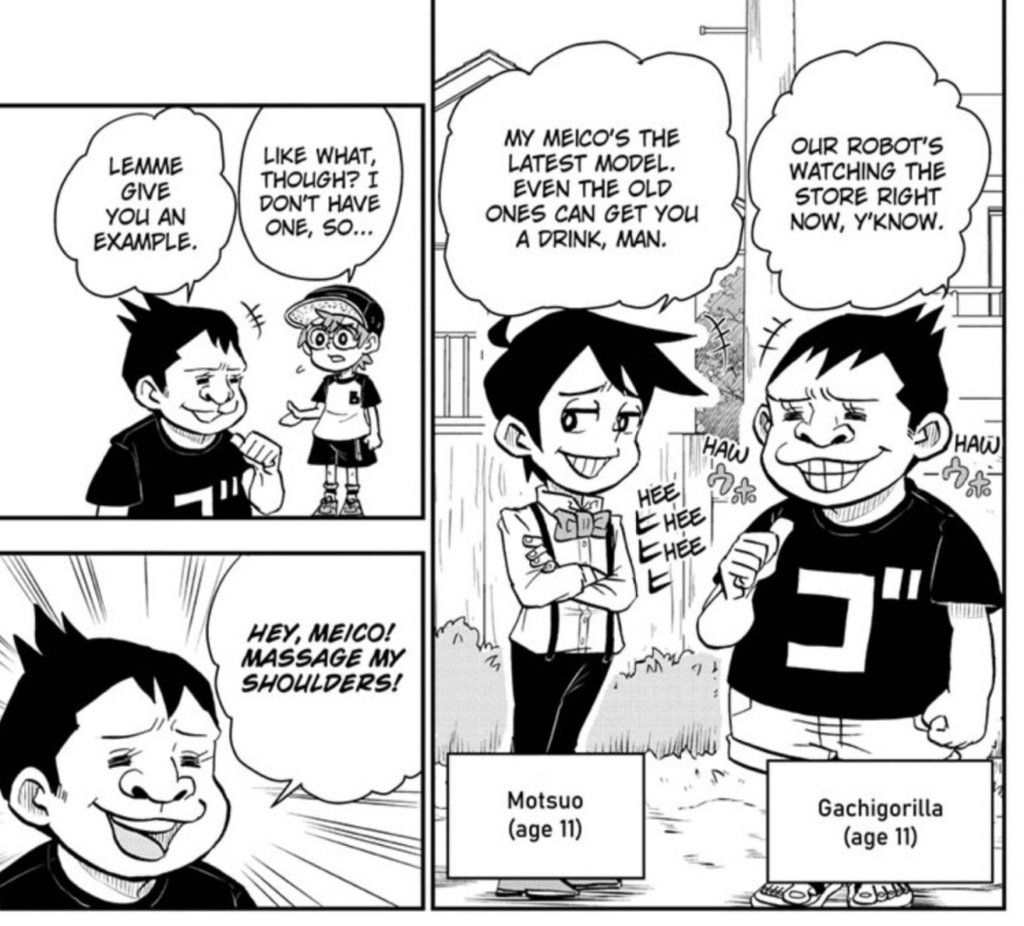 In the first couple of chapters of Me & Roboco, Shuhei Miyazaki revels in toying with reader expectations in this fashion, before pulling back the curtain entirely in chapter 9, where we are shown Gachi’s family and home life. This is repeated in chapter 12 for Mobuo, where it is revealed that he is actually giving up a lot to remain friends with Bondo and Gachi. At each and every step, Miyazaki is taking great pains to show us that these characters are not always entirely what they seem: this is even the case for Madoka, Bondo’s crush, who turns into a square-jawed Nobuyuki Fukumoto character every time she gambles in contrast to her innocent, childish appearance.

Spending so much time developing these side characters is quite unusual, and the fact that this is done at the expense of Bondo makes me unsure if I should be impressed or worried. For now, however, it provides a constant source of entertainment alongside astonishment.

Whatever the consequences, this approach seems to have worked. Me & Roboco is selling well, provoking quite a large amount of discussion online, and acting as one of Jump’s biggest comedy hits in a long while. It seems as if it’ll be sticking around in the magazine for a while yet, so it’s probably a good thing that it has managed to win me and others over despite a rocky start.

You can read Me & Roboco for free via VIZ Media’s Shonen Jump.