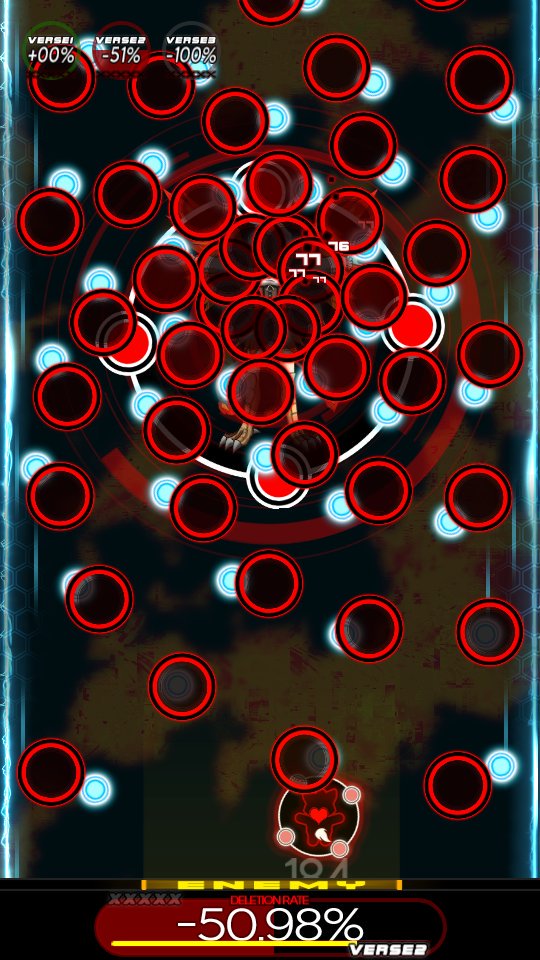 In a world full of discord, it takes one person to go beyond the noise. Or, NOISZ, in this case.

NOISZ is a musical shmup by indie developers NOIZMAKERS. They are a team comprised of Pump it Up Infinite and Neom FM staff members. This hybrid game combines bullet-hell-style shoot em up gameplay with pulsating rhythm-action gameplay. 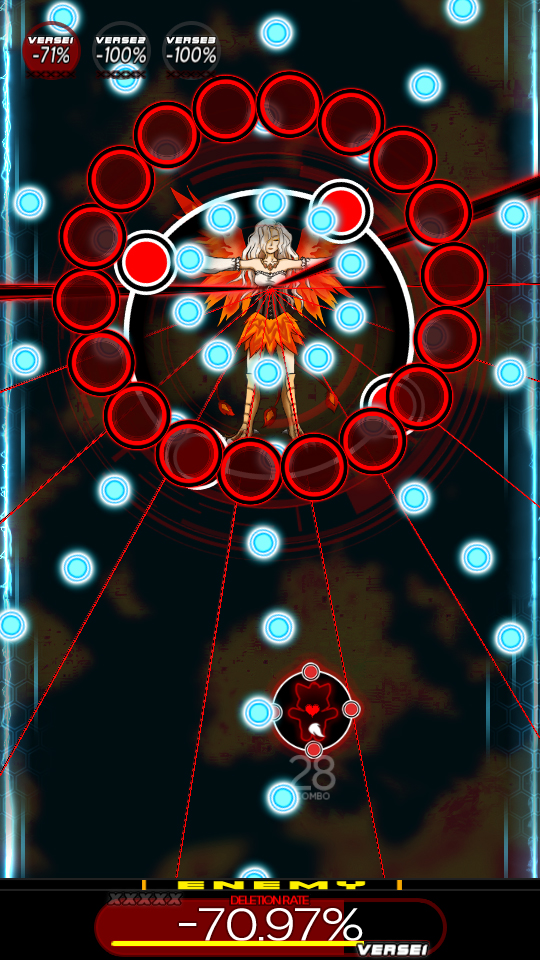 NOISZ‘ story is simple. The player character starts getting attacked by supernatural sonic beings. A mysterious girl named Beyond grants the player character the power to purify corrupt sonic entities and restore harmony to the sonic landscape.

In NOISZ, the player fights a given stage’s boss through rhythmic maneuvers. The player maneuvers white and red bullets spewed by the boss with the arrow keys. During maneuvers, attack by tapping Z to the beat of each stage’s song, damaging the stage boss. With each successful attack, the combo builds up, which increases damage output. The X button activates a shield, which has to be activated on the beat. This shield allows absorption of white colored bullets, further increasing the combo. If the player does not shoot or shield on the beat, they lose their combo. Collide with a red-colored bullet, or a white one without shielding, and they lose a life. Lose every life and damage output becomes minimal, though lives are replenished at the beginning of the next phrase. Reduce the boss’ health bar to zero by the end of the stage to defeat it. These are the basics of NOISZ’ mechanics.

NOISZ stages have three difficulty levels to start. The higher the difficulty level, the more difficult the bullet patterns are to manage. There are five play styles selectable before a stage begins. Each style prioritizes factors such as damage, speed, or shielding. The difficulty and style systems accommodate new players and hardcore players.  Do enough damage to a boss in a verse and the player enters a state called “overflow”. In this state, the bullet patterns become harder and bonus points are earnable.

Beginner players might not clear all the verses of a song. Still, they can continue playing a stage until the end, although they will likely not defeat the boss. Hardcore players will have an easier time and enjoy the score-attack elements of the game. 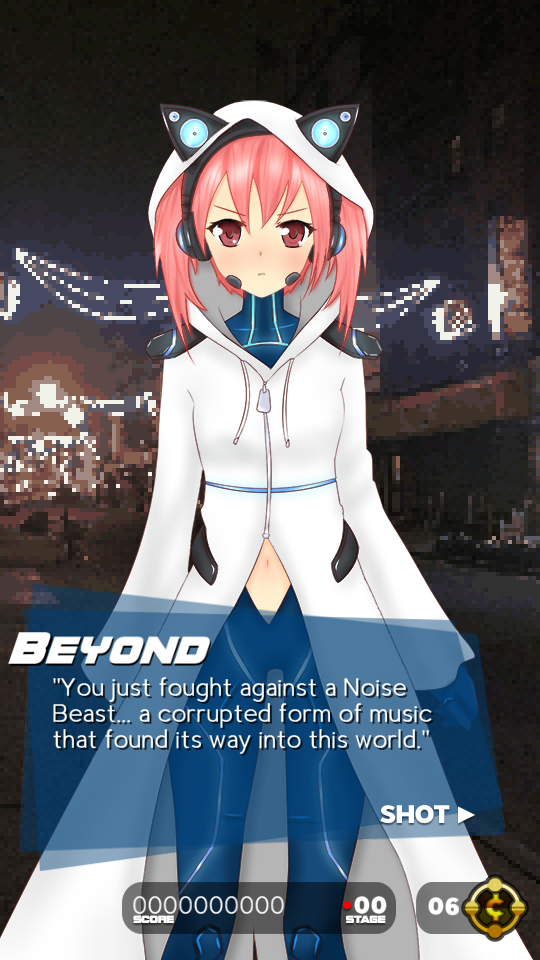 NOISZ’ modes range from Story Mode, free-play mode, and a dance-pad mode. Free-play mode allows the player to play the stages cleared in the story mode. The dance-pad mode is self-explanatory. The player character auto-attacks, and shots and shields can be switched as desired.

Even on the normal difficulty, NOISZ is a challenging game. Early stages are straightforward; as the player progresses, the bosses become more complex. They begin to feature goons that come in from the sides, or obstacles that block player attacks. In addition, some story mode stages will restrict players to certain styles of play. It is frustrating to lose all lives and fail a verse, and hard to make meaningful progress past that point. During the couple of plays of difficult verses, it is easy to lose every life within a couple of seconds. Regardless, the gripping gameplay urges the player onto one more try.

The COINZ system is limiting and could be better communicated. The story mode grants the player ten COINZ, which function as a continue system. Lose a stage and the player can retry a stage using one COINZ, or skip the stage by using two. The player can also quit out of a stage at any time by holding the ESC key, spending one COINZ. If the player’s total COINZ drops below zero, they will not earn any more points. It isn’t made clear that losing all ten is not the end of each story mode run. As there is no way to pause a stage, the only way to exit to the menu is to quit out of the stage, spending one COINZ, which seems flawed.

The game’s visuals are well-made for the most part, with some unrefined elements. The game screen displays in a vertical format, reflective of the game’s shmup heritage. The menus are slick and easy to navigate, and the tutorial text explains most of the game’s mechanics in detail. The story mode primarily stars mythology-inspired kemonimimi, or animal-eared humanoids, posed on top of pixelated real-life photographs. The stage bosses shift and shake, incorporating stage elements that echo their design. 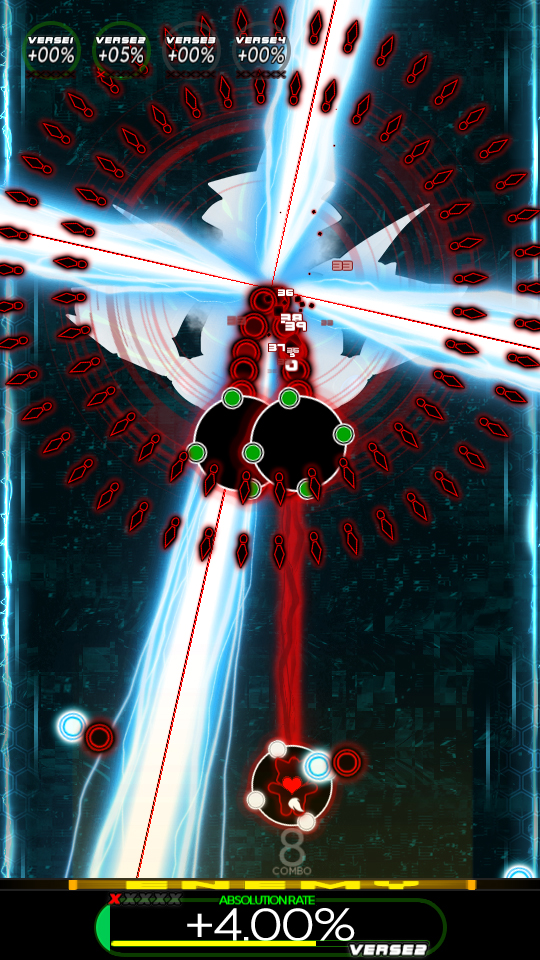 True to the game’s theme, NOISZ’ sound design and music are fantastic. The game’s sixteen tracks range in genre from chill house tracks to bass-y Japanese hardcore. The artists range from Western producers such as DM Ashura and Mitomoro, as well as Japanese hardcore producers such as Hommarju and m1dy. The visual novel tunes accompanying the story mode fit well to the scenarios, also. For the contemporary music game enthusiast, the soundtrack is a treat, and a highlight of the game.

NOISZ’ controls suit the musical shmup gameplay well. The tap-to-fire/shield mechanics become tiring if the player wants to grind a particular stage. The game is playable with both keyboard-and-mouse as well as a gamepad, per the player’s preference. With a compatible gamepad, the pad will rumble to the beat of the music.

The story mode is about the length of a novella. The story itself is a boilerplate supernatural action tale, with some charming dialogue and the occasional subtle joke or reference. In the story, there are three main paths with some more side stages accessible. Bonus COINZ are earnable if the player clears these side stages. The game is built for repeated runs of the story mode to unlock more songs and modes. The player is well motivated to improve their skills and earn higher scores. In this regard, the game has longevity past the first run of the story mode.

indiePCPump it UpReview
Join Our Discussions on Discord
Join Now