The year 2019 is here after a stellar year of rhythm and music-influenced game titles, and Sonar Beat by Life Zero has splashed onto Steam as one of this year’s early titles. Sonar Beat isn’t necessarily the most content-heavy title, but its execution and fresh approach is certainly worth its low price tag.

Sonar Beat is a simple, one-screen rhythm game that mimics the screen of a sonar in a submarine. Players are tasked with clearing out enemies that appear in time to music as the sonar’s display bar sweeps in a clockwise motion. At the root of Sonar Beat’s rhythm gameplay, it’s akin to something like Brittany’s Dance Beat on the Playstation 2, but the sonar mechanic adds a number of layers on top.

As the sonar sweeps around using echolocation, the rhythm markers aren’t visible until the display bar is in their proximity. Also, with the markers representing enemies attempting to wreck the submarine, if a marker isn’t cleared, it doesn’t go away, but, instead closes in on sub. The sonar is marked with three zones, and, if the player is unable to clear an enemy from the sonar, it attacks the submarine and the player fails the song.

Sonar Beat is a two-button game, allowing players to use a mouse, keyboard or controller. The main button takes down basic markers, but the secondary button allows players to clear a double marker in one go or take out up to two markers simultaneously if a marker reaches one of the inside zones. The markers are rounded out by hold notes that, as expected, require the player to hold the note down for a specified period of time.

It’s a simple premise that actually becomes frantic if notes start piling into the inside zones. The player’s only final defense comes in a stock of bomb-like shields that automatically clear out markers if an enemy reaches the middle. Songs are started with one of these items, but tasks such as reaching a 100 combo or grabbing a full combo in a marathon session grant players an additional shield.

The gameplay premise is the meat of Sonar Beat, and it is spread out over 12 different music tracks. Besting the individual tracks in the main game mode allows players to select a “Game+” mode that marathons all of the songs into one session to allow players to go for very high combos.

The game is pleasing graphically, as it punctuates what it needs to without going overboard. The visuals in Sonar Beat are simplistic where players need to focus on the sonar, but then get bolstered by vivid colors and designs around the border of the game screen. In a sense, the backgrounds and transitions evoke a feeling of games such as Lumines, and there are nice punches of detail, especially in cases where the music intensifies. 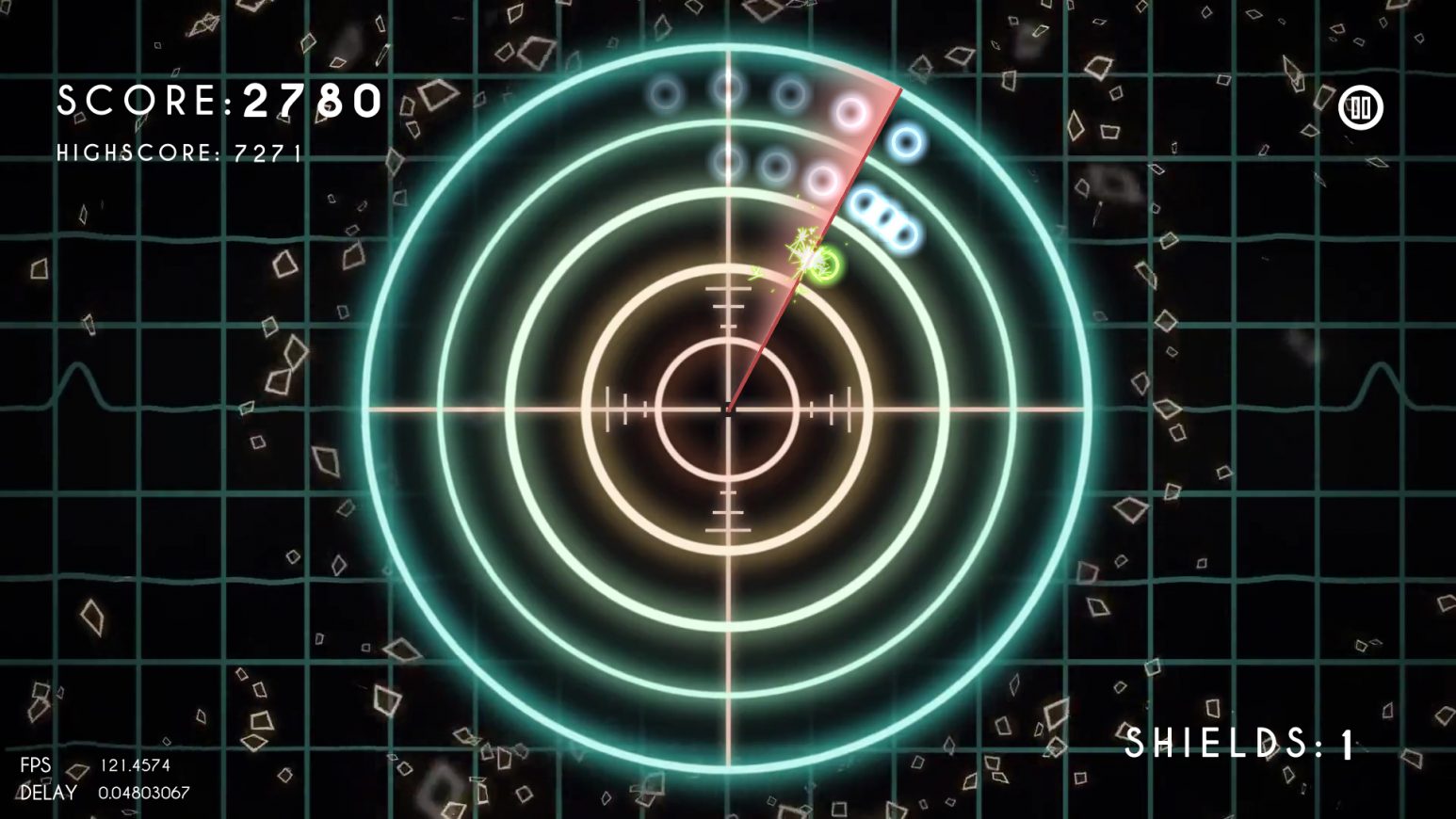 Sonar Beat’s soundtrack may not offer great genre variety, but, what’s here is well done, with some catchy melodies sprinkled throughout.

While the music tracks have a similar feel based on the artists that lent their talents, they do range in tempo and intensity. The easier songs are moody and low-key, while the harder songs get a little peppier. The music is mostly on the lighter side with titles and themes that appropriately echo the game’s presentation of being nautical-based.

There are sound effects included for the game’s menus and submarine presentation, but the music is by far what players will hear the most. Thankfully, this soundtrack is generous for a game that only costs $2.50.

As a two-button game, Sonar Beat works very well – it’s one of those titles with a simple core, but added layers of depth. The premise is easy enough for any player to understand, but it certainly has a difficulty curve as players progress through the songs.

The outer zone of the sonar keeps the title as a basic rhythm game title, but missing any notes can intensify the gameplay. Most of the replayability of the game is currently in its leaderboard system, with the expected combo multipliers for score in place during gameplay. The later songs do get challenging as players adjust to the sonar mechanic, and a couple songs did hold me up from progressing for a short time.

Sonar Beat isn’t the deepest title as I completed each song, completed Game+ and earned every achievement in the title in a period of just over two hours. The game only costs a couple of bucks, so the time spent on the title doesn’t reflect any lost value. If anyone is even remotely interested in rhythm games, Sonar Beat is in fact a nice experiment with something quick and original. 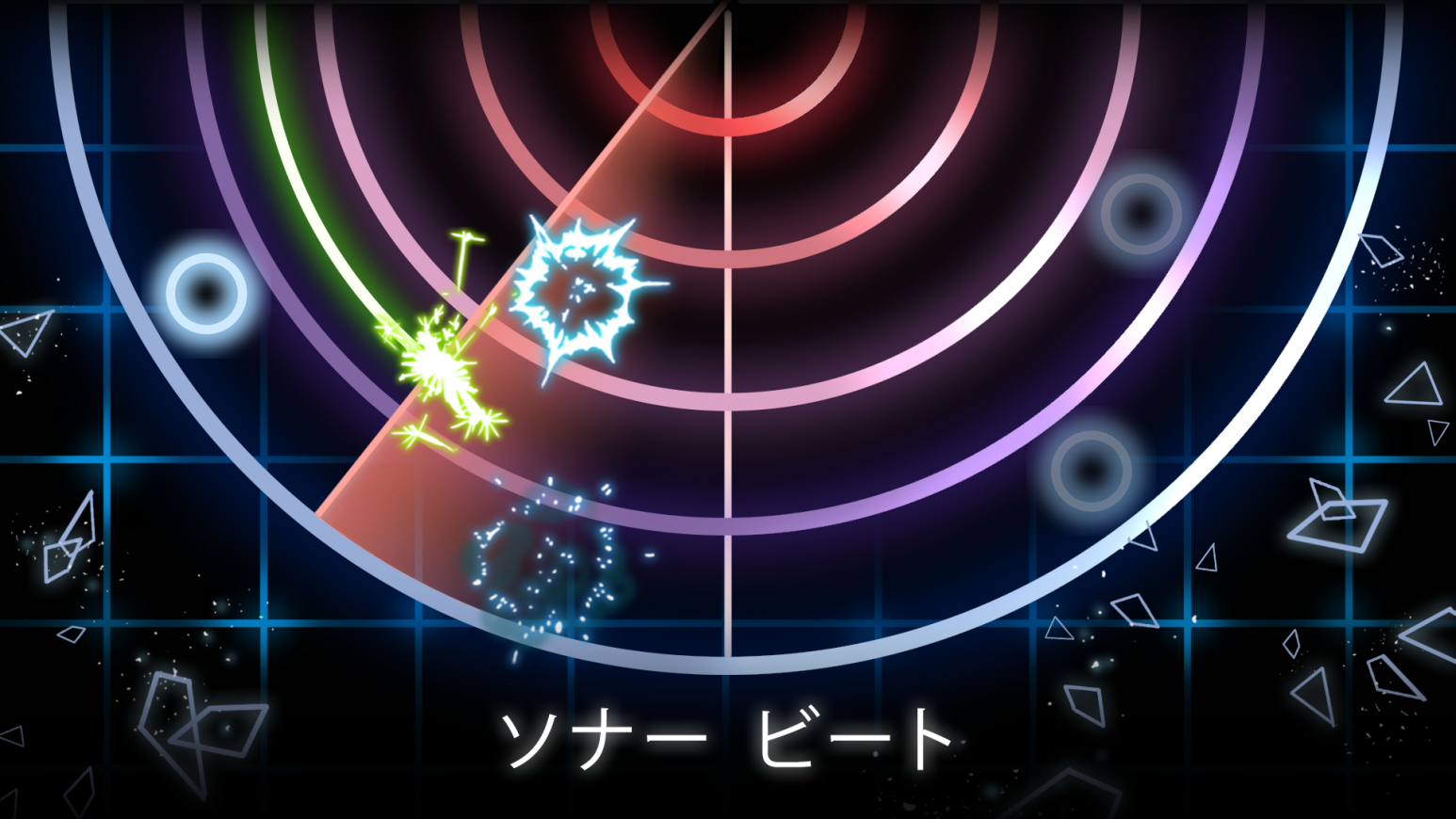 The game does take a few goes to adjust to, though, and, while the game does a nice job of keeping the difficult increases even, the last portion of the game seems like it would be a roadblock to those who aren’t seasoned rhythm game players. Sonar Beat could benefit from a few more simple options.

Simpler (or even more difficult) note patterns are always welcome, but, at the least I would recommend a toggle that gives beginning players a safety net such as a few more default shields to work with. For the sake of leaderboards, a more forgiving setting could reduce scoring, and, perhaps when the leaderboards begin to stagnate, a more difficult setting could be added that boosts the player’s scoring.

I played through the entirety of the game in the 1.00.3 version, but the game has since shifted to 1.00.6 to retool the tutorial based on player feedback. This is great as it shows feedback is being taken into consideration and players can potentially expect more features in the future.

My only other nitpick for Sonar Beat is in the hold notes. They are used as appropriate for the songs, and I was able to use audio timing to catch them as I needed.
Sonar Beat is a rhythm title that requires you to also release the button press on an indicated timing. I felt the marker needed more of a highlight or visual pop at the end of this timing to also give the player a visual cue on top of the audio.

If you fail to release a hold note when indicated, the game essentially places a single-press note into the next zone. These are easy to grab, but I found hold notes to be the most frustrating type of note to allow into these inside zones. Being a $2.50 game, you’ll have to take the lack of bells and whistles that come with it, but the title is by far worth this asking price. Those accustomed to the genre will likely clear the game out in a few hours, but there are small updates that could potentially be done to boost the replayability and accessibility of the game. Thankfully, with a revised tutorial already patched into the game, it seems like developer Life Zero is already reviewing feedback and making future considerations for the game.