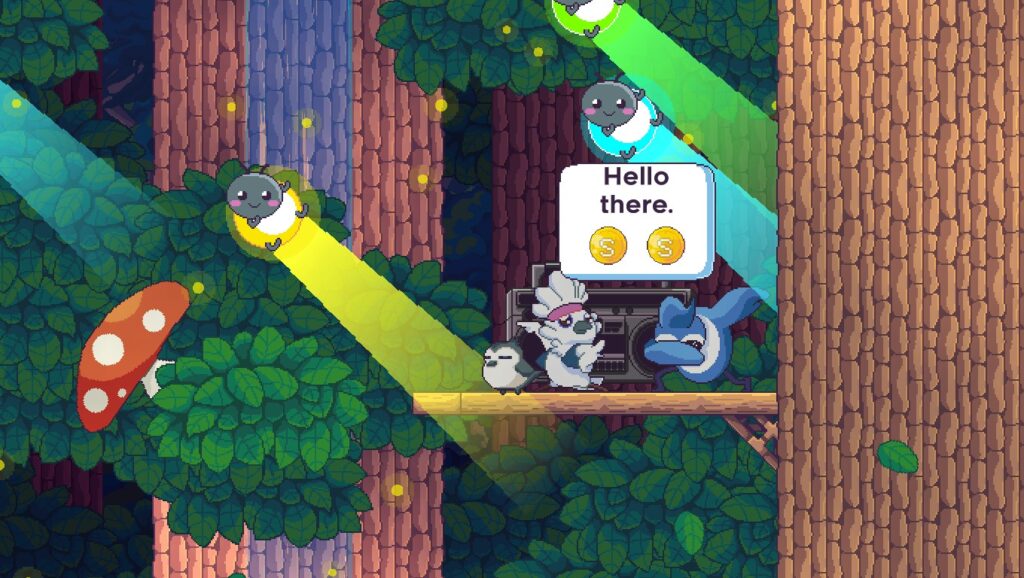 I wasn’t sure what to make of this game at first glance, since I literally knew nothing about it.

My first impression was that it’s very cute, one that holds up through the whole game.

My second was that it’s a platformer of some sort, though the rhythm game connection had yet to hit.

The protagonist, Birb, is a songbird who’s out to find his missing family. He also loves music, and the creation of music is literally his best weapon.

Songbird Symphony is a literal combination of a platformer and rhythm game. Progressing in the stages, moving platforms, finding hidden secrets, and especially defeating the bosses all involve keeping beat to the background music at any given time.

At first, the closest comparison would be Elite Beat Agents/Ouendan/Osu. The boss gives a series of notes to a beat, and Birb has to keep up. During stages, you have to follow cues to move platforms, discover secrets, and so on. While early on the player only has access to one note(“S”), later stages unlock more notes, and by the end of the game, it requires the player to go through very rapid and complex sequences of multiple notes.

This alone would make for an unique sequence, but Songbird Symphony doesn’t just rest on its gameplay innovation laurels. It also has charming, highly fluid animations, a quirky cast of fun characters, a wide variety of levels, and replay value to locate all the secrets and get top grades on the assorted boss fights.

My only complaint would be the “musical” segments during the aforementioned boss fights. These are supposed to be “sung”, but actual singing is substituted for different sounds and musical effects, which doesn’t quite have the same impact. Think like the opera in Final Fantasy VI, but not nearly as well orchestrated, and you’ll get the general idea.

Despite this minor complaint, Songbird Symphony is a very innovative and clever hybrid of platformer and rhythm game, and one that other developers could do well to learn from and build on.

Yes, there are birds that dab.