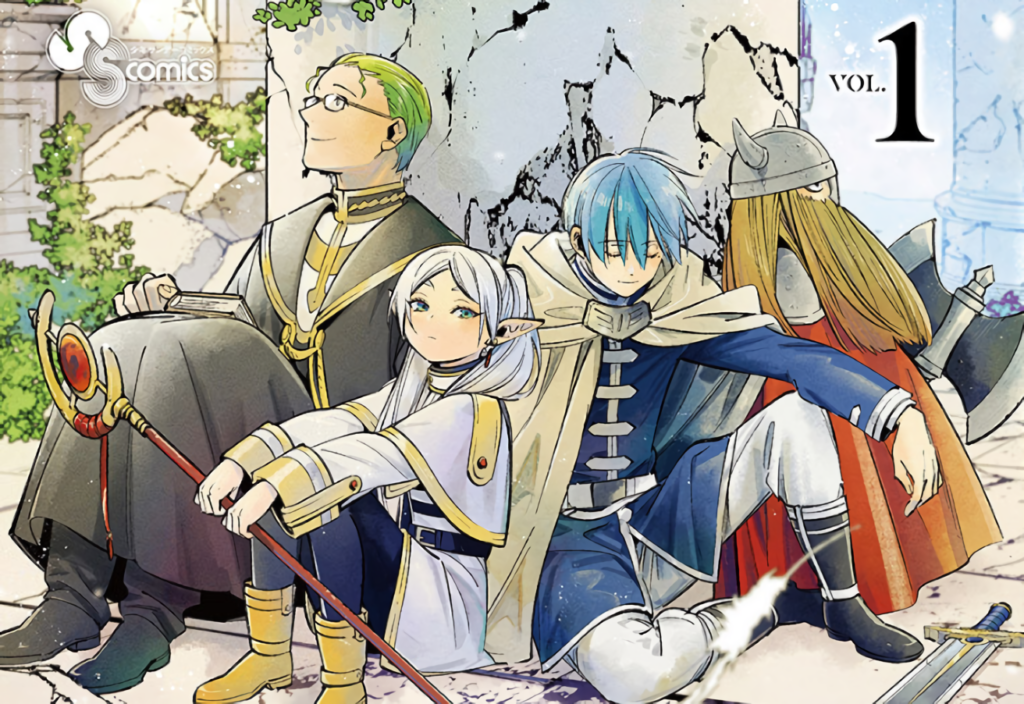 Have you ever wondered what happens to your JRPG party after you take down the final boss, take out the cartridge, and put it back on the shelf? I have. Perhaps it’s something conditioned by a childhood spent in front of the TV, but even now, I still occasionally think about my characters in Dragon Quest XI. I hope they’re doing well. Sousou no Frieren captures that wonderfully well.

Launched earlier this year, Sousou no Frieren has been on my radar for a while thanks to its intriguing premise and unique take on the fantasy genre. A recent piece by Comic Natalie featuring recommendations from various high-profile celebrities also solidified that fact. Set in a typical high fantasy world, it follows the adventurers that took down the Demon Lord after they do so, dealing with their lives after the fact and what they choose to spend it doing. In particular, it does this through the eyes of Frieren, an elf with an extremely long lifespan.

As a result, Sousou no Frieren becomes one of the best and most emotionally charged manga I’ve read all year.

Time Is a Funny Thing

The idea of an elf character feeling detached from the rest of the human characters because of their long lifespan is hardly anything new. Tolkien’s Lord of the Rings, in particular, has Legolas grow from a cold, uncaring warrior into a more jovial character as a result of his experiences, but even in traditional folklore (from which Tolkien drew his inspiration), elves are portrayed as cold, aloof, and uninterested in the petty goings-on of transient humans.

Frieren of Sousou no Frieren is one such character. Yet, she is also entirely unique. Perhaps this is, again, due to my own subjective experiences, but I immediately found myself drawn into the story as a result of its unique premise; what really impressed me, however, was not the simple idea of seeing the ‘true’ end after the happy end, but Sousou no Frieren’s representation of time and its fickle nature.

As an elf with an extraordinary long lifespan (it has yet to be specified in the series), everything appears as but a momentary blip for Frieren. As she remarks to her party in chapter 8: “Even my adventure with everyone will be but one-hundredth of my time here.” Consequently, her whole approach to life is completely different to that of a human: she has no qualms about spending six years decoding a magical spellbook, or taking three years to find a single flower. That is the kind of patience that comes with age.

Even so, that “one-hundredth” that Frieren was talking about was not just a momentary blip like any other. As her fellow party member Eizen says to her – a dwarf with a similarly long lifespan – “That one-hundreth changed you.” It was qualitatively different from everything that came before, and that is what Sousou no Frieren is all about.

You Only Realize What You Have After It Is Gone

You can choose to define your life in objective terms. In my case, I have lived for twenty-two years on this planet Earth – around 8200 days, 4,312,872,000 minutes, and 258,772,320,000 seconds, give or take. Yet, we do not experience life like this: some periods are more eventful than others, and some impact us in life-changing ways. Again, this is what Sousou no Frieren is all about.

To bring this review back again to my own subjective experiences, I have gone through such a period. From September 2017 to July 2018, I lived and studied in Japan and had what can only be described as ‘the time of my life’: meeting new people, exploring new cultures, and defining myself professionally… it truly was a life-changing time, and it felt like every day was an eternity.

But even then, there were things that I missed; things that I only treasure now, in hindsight. Frieren’s quest in Sousou no Frieren is similar to that. Having spent ten years on an adventure thinking that it was just “one-hundredth,” she never really appreciated what she had until it was gone. And it is the death of Himmel, the “hero” and leader of the group, that opens her eyes to this fact. 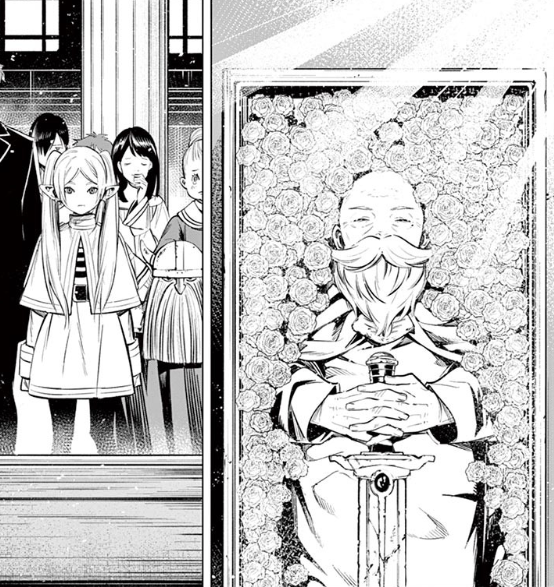 Chapter 1 of Sousou no Frieren is probably the best first chapter of any manga I’ve ever read. It could be published on its own, as a one-shot, with no subsequent story attached to it and it would still give me exactly the same impression. Following Frieren’s party as they head back to the capital to deliver the good news of their victory against the Demon Lord, Frieren is unusually cold and declares that she intends to travel the central kingdoms looking for magic for “around 100 years.” By the time she comes back, Himmel is an old man and so is Heiter.

Himmel’s funeral brings back all of Frieren’s memories. Crying, she laments: “Even though I knew how short humans’ lives were, why didn’t I make more of an effort to get to know them?” In reality, she spent most of her adventure taking it for granted. It is only now that she realizes how special it was.

Therein lies the actual story of Sousou no Frieren. Most of this review has, unfortunately, just been me discussing the moral and philosophical question posed by this work, but no matter. That’s the appeal of this manga anyway, so hopefully it has piqued your interest.

It only becomes clear about halfway through volume 1 what the story Sousou no Frieren will actually be. Much of chapter 2 is spent introducing an apprentice character named Fern, and chapter 3 appears to be an episodic vignette. Yet, in chapter 4, Frieren declares that her objective is to retread the footsteps of her old adventure “before the memories wither away” – in other words, to try and appreciate what she had in contrast to her old aloofishness.

Frieren is changing as a character, bit by bit. This is evidenced in later parts of volume 1 and much of volume 2, as she begins to take more and more notice of time and tries not to waste it in the company of the human characters. This is doubly true when another character is introduced in volume 2: Stark, one of Eisen’s old pupils and another addition to the growing adventurer party.

In this sense, Sousou no Frieren does remind of later portions of Berserk. Much like Guts in Kentaro Miura’s series, it is only by surrounding herself with new comrades that Frieren comes to change her outlook on the world, appreciating it in the moment instead of dismissing it as ultimately insignificant. One can be sure that, wherever Sousou no Frieren ends up going, it will be a satisfying and cathartic experience.

As of the time of writing, Sousou no Frieren has only two collected volumes released. Its upcoming third volume will finish off an arc that has been left on a cliffhanger in the second, so I’ll refrain from commenting on the overall narrative at this point.

But I will say this: I have complete faith in author Kanehito Yamada and artist Tsukasa Abe to continue to deliver on what I’ve seen so far and put together what could very well shape up to be the best fantasy manga of the decade.

Sousou no Frieren is currently serialized in Weekly Shonen Sunday.