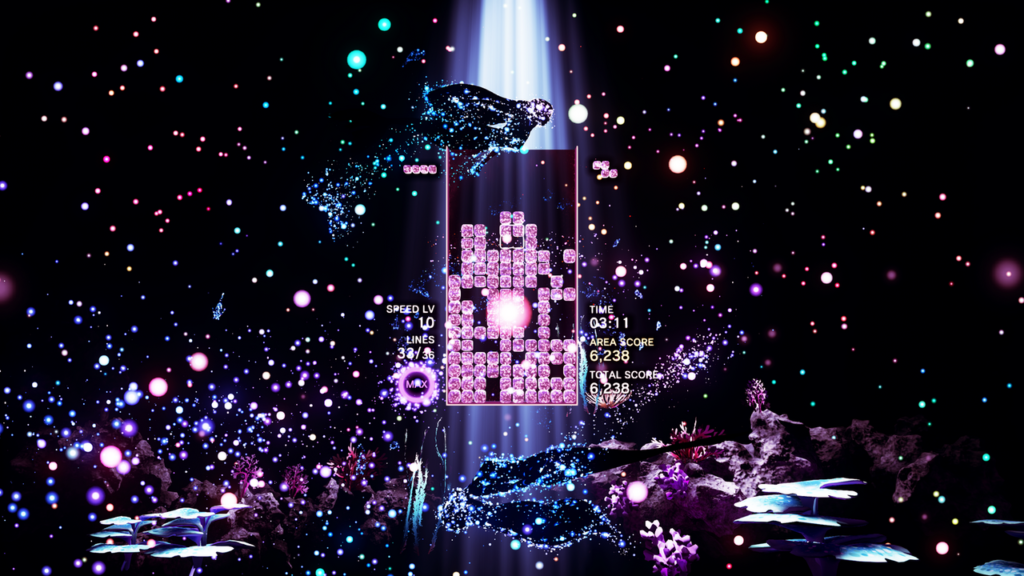 Tetris Effect is a familiar game that takes the player on a journey of the soul.

Tetris Effect is the latest iteration of the classic tetromino-arranging game originally designed by Alexey Pajitnov, with an audio-visual twist by the studio Enhance Games, headed by the visionary game creator Tetsuya Mizuguchi. You may have heard of another block-arranging game made by Mizuguchi, the Lumines series.

Lumines, as it turns out, was a compromise. In the mid-2000s, Mizuguchi asked fellow Tetris-head Henk Rogers for the Tetris license to make a PSP game, but per the rules of the Tetris license, the IP could only be in one publisher’s hands at a time. In response, Mizuguchi and his team at Q? Entertainment created Lumines, which became a massive hit in the early life of the PSP. 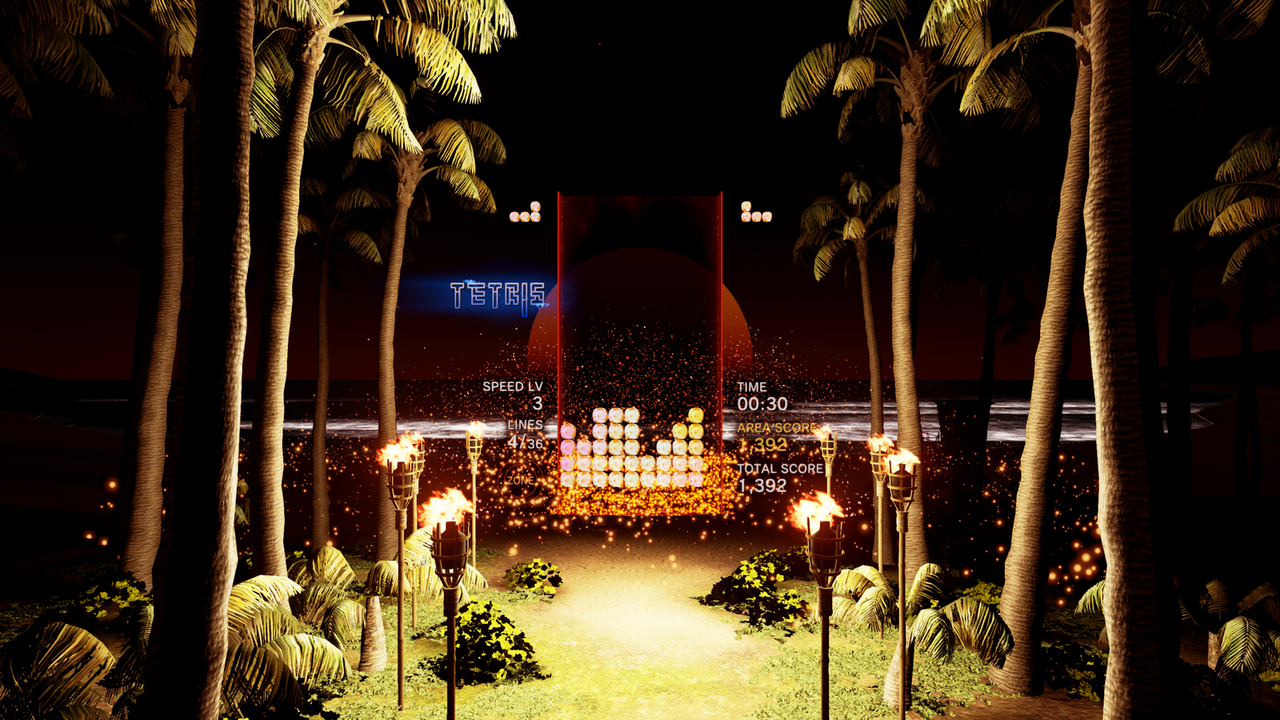 Now, over a decade and a half later, Mizuguchi and Enhance Games have finally made a Tetris game. And let me tell you, it was well worth the wait.

Tetris is one of the most ubiquitous video games of all time, but I’ll still do a quick run-through of the mechanics; in a vertical playfield, you arrange seven types of blocks, or tetrominoes, to create horizontal lines, which you clear to make room for additional tetrominoes. Pressing the L1/R1 buttons holds a piece up in the upper-left corner of the screen. Tetris Effect adds an additional, optional mechanic, called Zone; a press of the L2/R2 buttons allows you to stop the tetrominoes from falling for a short period and clear as many lines as you can before the Zone meter completely depletes.

Tetris Effect comprises two primary modes, Journey and Effect. Journey mode features 27 stages played in groups of three to five stages (except for the final stage, in a group all its own). You can play these stages in Beginner, Normal or Expert modes; the modes differ in terms of the lines required to clear, as well as the pace at which the tetrominoes drop. Fail a stage and you can continue from the beginning of that stage. But, your score for the stage group will reset and you’ll automatically earn a D-ranking when you finish. You may continue from any stage you’ve already cleared in a group.

Effect Mode comprises various alternate modes themed around moods. Once you create a player avatar and place your location on the in-game globe, you may dive in and try one of these modes. There are Relax modes, such as quick play or marathon modes without game-over conditions and an unchanging/absent BGM; Adventurous modes feature challenges such as clearing “infected” tetrominoes and dealing with fixed I-tetrominoes falling after a certain number of tetrominoes placed; Focus modes offer puzzle-oriented challenges; and Classic modes, which offer the standard Tetris fare with minimal frills. 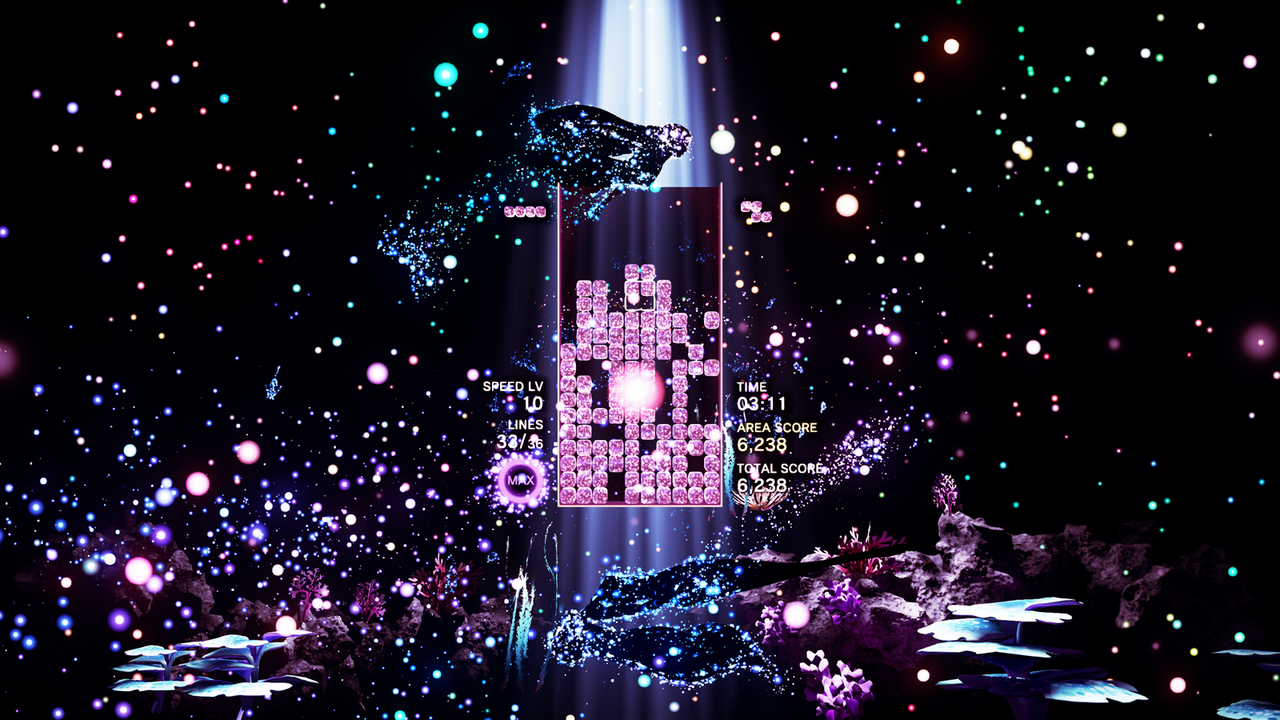 Tetris Effect is a gorgeous game. The game features a variety of landscapes, ranging from the tranquil deep ocean, the twinkling piano and bustle of New York City, and even the tranquil frozen landscapes lit up by the Northern Lights. Also on display in many stages is the Enhance Games house style of multicolored particles forming animals, plants, and otherworldy beings. As you clear more and more lines, the stages come alive, livening up the landscapes and fleshing out the background elements.

When played with the PSVR, it’s as if you’re right there in the landscapes, seeing every little shift and reaction that your actions make. In my favorite stage, Da Vinci, it’s as if you’re flying through the clouds, past dozens of windmills; it made for my favorite moment using a PSVR yet. Combined with the game’s Theater mode, where you can sit in each stage’s environment and play around with the effects, it’s a treat.

It wouldn’t be a true Mizuguchi experience without excellent sound design, and Tetris Effect lives up to that reputation. Every shift and rotation of the tetrominoes creates a sound that syncs up to the beat of the music, creating the illusion that you are playing along to the stage’s background music. Every line formed creates a slight crescendo. It’s all connected, per the lyrics of the first stage’s music track. The music and visuals work together to create the effect of synesthesia, a hallmark of Mizuguchi’s games since the game Rez. 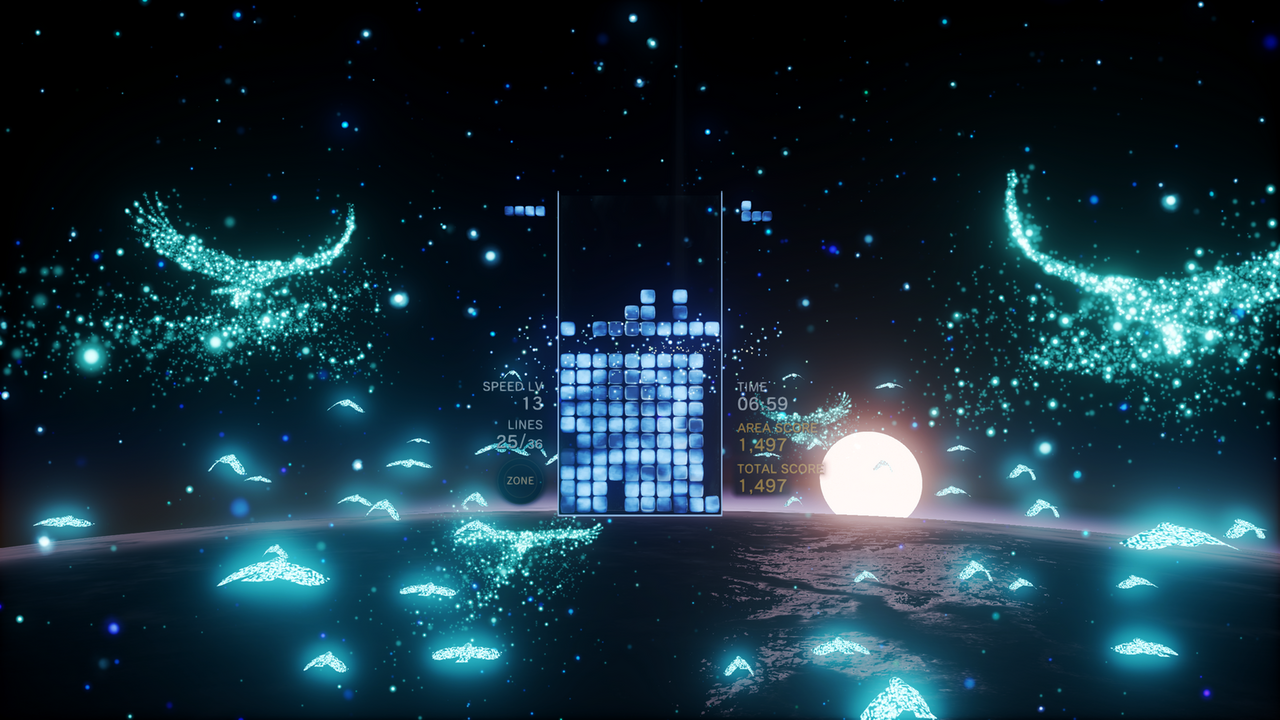 Tetris Effect’s music genres come in flavors of ambient, house, future bass, trance, and more. The vocal tracks, spaced far apart in the stage groups (two in the first group, three in the second-to-last, one as the finale), all fit their respective background tracks well, featuring uplifting lyrics about unity and triumph over shortcomings. There are also several tracks exclusive to the Effect modes, so keep an eye out for those. The genre selection doesn’t stray terribly far from the usual Enhance Games selection, so don’t expect anything too far off of that path.

Tetris Effect focuses on the single player experience. The Journey mode takes about two hours to clear, assuming a normal pace and average skill, and there are no local or online multiplayer modes available. This may seem scanty, but the meat of the game is in the Effect modes. There are leaderboards for the Effect modes and individual stages. Every week, there are new challenges  in the form of Weekly Rituals. Players collectively build up their scores to unlock additional event-locked avatars. Across all of the modes, there are also challenges to clear to unlock additional avatars and music tracks for background play in Effect mode.

For all that Tetris Effect does well, there are some minor flaws. The game’s visuals and synesthesiac effects may be distracting or overwhelming to some players. There are various options to reduce the intensity of the visuals, as well as an option to change the tetrominoes from stage-specific designs to the standard Tetris primary color set. The default zoom level is fairly far out from the board; thankfully you may change the zoom and rotation of the play field at any time during normal play. In addition, on a standard PS4, the line-clearing stage effects can sometimes produce several seconds of lag; this is not present on the PS4 Pro.

As a Tetris game, Tetris Effect is inviting to new players while offering an ample challenge for those who fancy themselves Grandmasters-to-be. On the Beginner path of the Journey mode stages, the drop speeds never exceed level 10, but by Expert mode, expect the drop speed to hover around levels 15 to 20 by the latter half of the game. The drop speeds change pretty drastically on all modes, depending on the pace of the music track at the given line threshold, which can be a jarring transition in some of the more intense stages. Again, in case you’re in a bind, the Zone mechanic is generous enough on Beginner and Normal that you can clear enough lines to save yourself from filling up to the top of the playfield.

Before we wrap up, I’ll address a common clamor that’s been popping up a lot: “$40 for Tetris? That’s ludicrous!” Yes, Tetris Effect is $40 at retail and on PSN, and that may not be the most attractive price point for many people. But, it’s a fair price to ask for the level of polish and care that’s been put into this game for its six years of development. For the Mizuguchi fans, it’s an immediate recommendation, but for the casual Tetris fan, it may be worth waiting a little while for the price to drop.