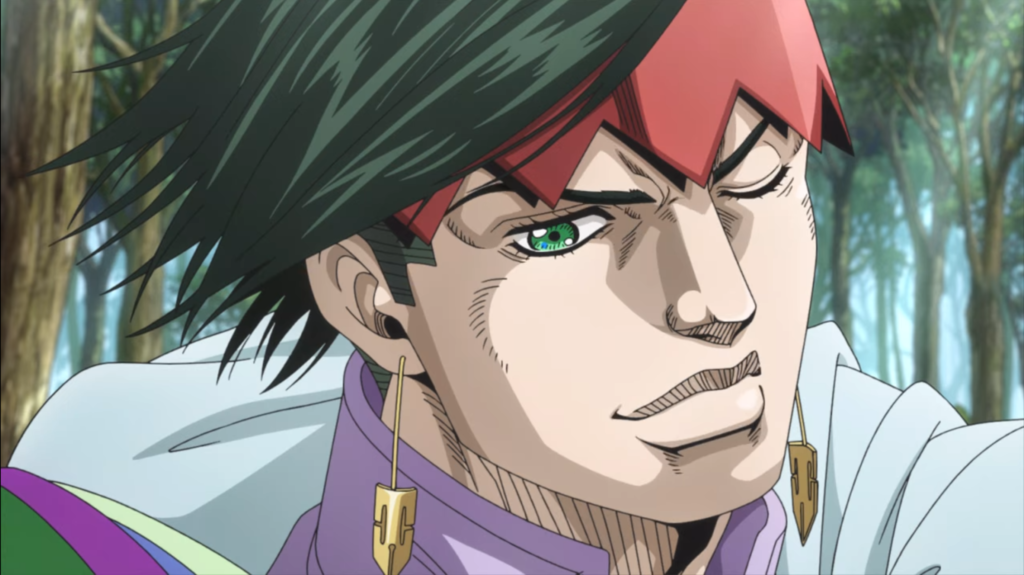 Ever since they began in 2017, the Thus Spoke Kishibe Rohan OVAs (Kishibe Rohan wa Ugokanai) have occupied a weird space in the JoJo’s Bizarre Adventure fandom. Although they were only technically available to those that either bought the Diamond is Unbreakable Blu-rays or attended special screenings in Japan towards the end of 2019, many fans have already seen them through more illicit means. Not me, mind.

Now that Netflix has released them, we finally have a chance to discuss.

First, it’s strange that Netflix, of all platforms, was able to persuade David Productions and the production committee to let them release the Thus Spoke Kishibe Rohan OVAs. After all, although all five parts currently animated are available on the service in Japan, overseas viewers have always counted on Crunchyroll: why were they not able to secure the rights, then? If an uninformed Netflix user was to stumble on the Rohan OVAs after accidentally binging the first two series, for example, then they would have no idea who Rohan even is since Part 4 isn’t on there!

In any case, this tiny accessibility annoyance doesn’t take away from the quality of the Thus Spoke Kishibe Rohan OVAs. Rather, they offer something incredibly special in the wait for the inevitable adaptation of Stone Ocean: a completely different JoJo experience, centering on a character we know and love, but using him in entirely different ways. 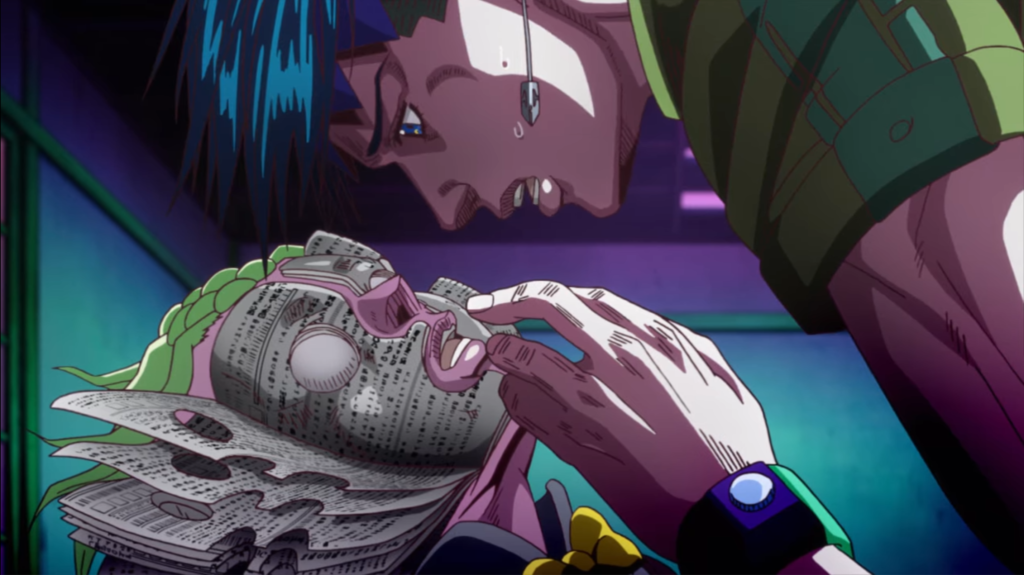 There are no Stand battles in the four ‘episodes’ that make up the Thus Spoke Kishibe Rohan OVAs. In fact, the key question precisely is whether or not the encounters of Hirohiko Araki’s self-insert can be explained by way of Stands, or if they are something more sinister and paranormal entirely.

There is a bit of action, but the episodes rely more on tense, mystery-driven storytelling and a whole lot of horrific imagery: it’s probably a good job that these episodes weren’t broadcast on Japanese TV, as there’s actually quite a lot of questionable content here that would brush up against long-held sensitivities around blood and gore.

Episode 1, ‘At a Confessional,’ gets off to an incredible start. In gathering materials for his next manga, Rohan gets mistaken for a priest when he sits in a confessional booth in Italy, which foreshadows Koichi’s later appearance in Golden Wind. The story that his accidental confidant imparts takes us on an absolute rollercoaster of a moral tale, making clear the importance of the value of selflessness and charity. I won’t spoil the ending for obvious reasons, but I’ve never seen someone make eating popcorn quite so dramatic.

Episode 2, ‘Mutsu-kabe Hill,’ is where it becomes clear that Thus Spoke Kishibe Rohan benefits heavily from the OVA format. Apart from being short, self-contained episodic stories, it would have been impossible to adapt something like this for Japanese TV without a lot of censoring. Saying what exactly makes me think this would be a spoiler, but suffice it to say that this particular episode doesn’t hold back on the blood, gore, and body horror. 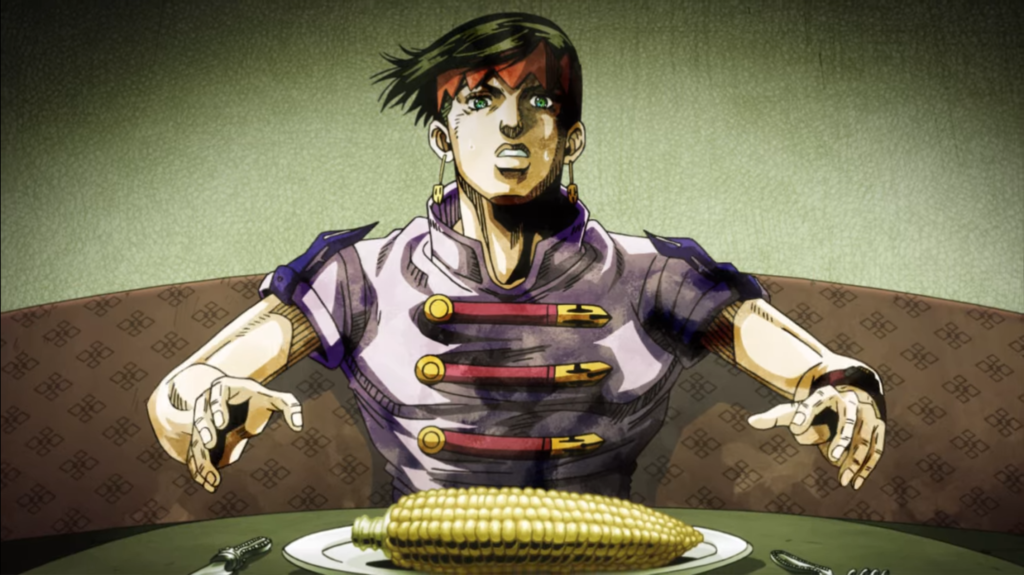 There is a reason why the recent live-action drama also featured it so prominently in its marketing: the combination of exploring a mysterious walled community and the theme of minding your manners is a unique one, keeping you on the edge of your seat the entire time. Takahiro Sakurai’s performance here as Rohan also particularly shines through, given that we are encouraged to pay attention to his curt manner of speaking. That’s not to say that he’s bad otherwise, mind.

Episode 4, ‘The Run,’ is one of the only stories adapted as part of the Kishibe Rohan OVAs that actually features a Stand, or something akin to it. Following the story of Hashimoto Yoma, it explores ideas of obsession and physical perfection, almost in the vein of a Yukio Mishima novel. The story’s presentation as a kind of ‘confession’ from Rohan as he explains how he injured his hand and how he wasn’t to blame makes this episode particularly harrowing, especially as it leaves off in an ambiguous manner. 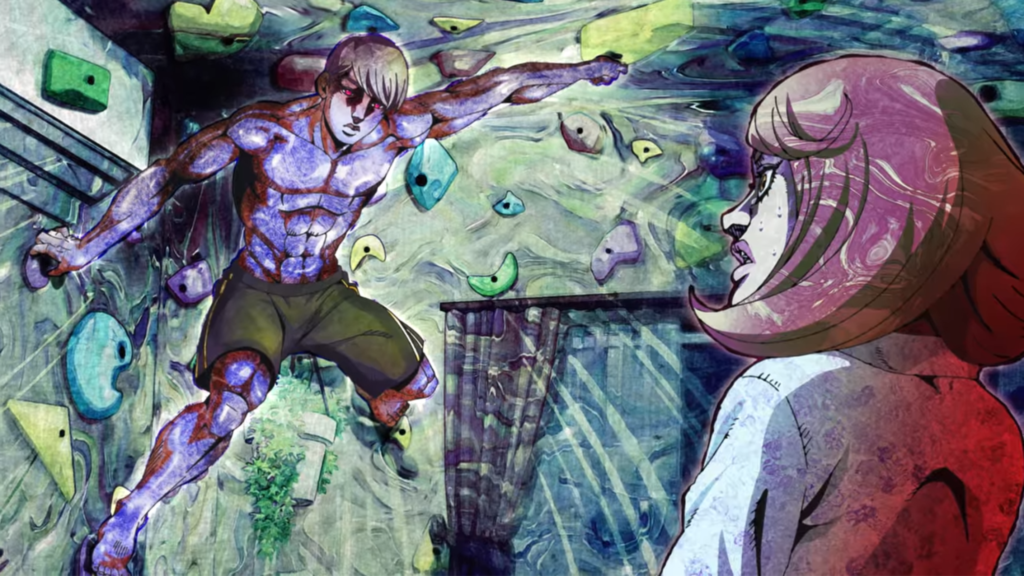 One of my only criticisms of the Thus Spoke Kishibe Rohan OVAs is that there aren’t more of them, which isn’t exactly a bad problem to have. They are much more than a distraction in the wait for Golden Wind: they are some of the best JoJo stories period. With any luck, the success of Netflix’s worldwide release will convince David Productions to make some more.