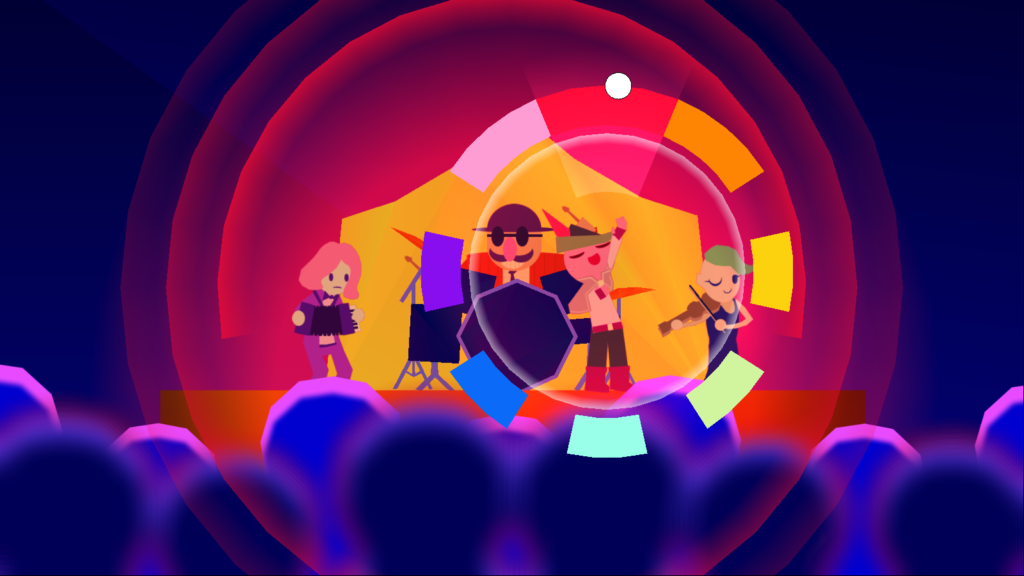 Preview and review copies of the PC/Steam version of this game were provided to Bemanistyle by the developer. Wandersong is also scheduled to release on Mac and Nintendo Switch formats.

Recent years has seen a trend in rhythm elements making their way into platforming games, and it’s a trend that has help infuse music genres into the indie scene. Greg Lobanov’s effort Wandersong goes a little lighter on rhythm elements, but its infusion of whimsical music, storybook visuals and wacky characters and story helps it become one of the best music-themed games of 2018.

Wandersong puts players in the role of a bard, who is tested in his dreams to determine if he is a hero worthy of saving the world. This test does not go well, but it gives the bard an ominous premonition that something is not right.

Venturing into town for the day, the bard encounters ghosts and slowly realizes there is truth to what he experienced in his dream. Although he failed the test of strength and melee, the bard’s powerful voice resonates with the environment and spirits, and he is sent on a quest to appeal to the entities that keep existence in balance and order.

Wandersong is one continuous story, so it doesn’t offer multiple modes of play, but storytelling is a huge part of the game. I would estimate a straight playthrough to take players approximately 8 hours, but the story extends into a massive number of side conversations and a handful of optional tasks and areas to uncover.

The game’s NPCs exude a ton of personality in the dialog, filling the player in on the game’s world. Many characters will also give players clues to what they need to accomplish in that chapter. This was a welcome feature as, even if the clue was vague, at no point in my playthrough did I ever feel I had zero ideas of what I needed to do next.

The overall story is well crafted, as even though it is rooted in the humor of a “lowly bard” trying to save the world, it appropriately mixes in moments of doubt in the bard along with serious, moody moments. The story also establishes connections with the world’s characters that come into play in multiple points of the game. 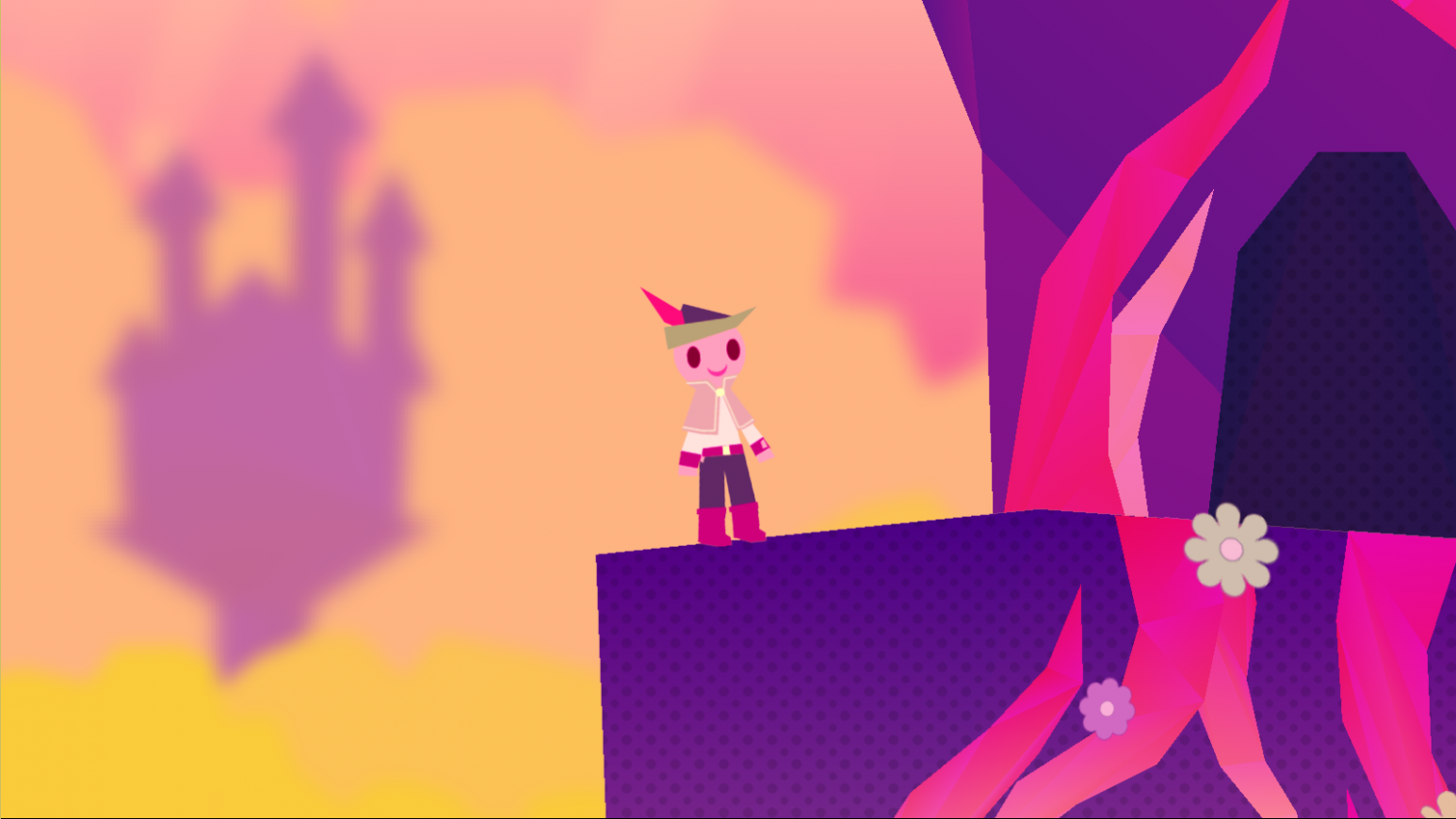 The game’s visuals revolve around very colorful settings that fleshed out with a storybook-style presentation. Most of the graphics are simple shapes, but they are layered in a way that give them a lot of depth and detail.

These elements are further bolstered by careful choices of color, such as using cooler colors to convey darkness/indoors and hotter colors for outdoor/bright settings. The game also takes care to provide variety in the time and place settings and pacing them throughout the duration of the game, so each locale serves as an interesting environment to explore.

A lot of detail is also placed in the environment as it becomes affected by the bard’s voice, with some of the background elements pulsating in a rhythm and, changing colors based on the bard’s pitch. Many of the game’s assets are animated in exaggerated ways, which further adds to the personality of the game. The characters’ personalities are also further punctuated by details such as having different fonts and styles for their speech, so it’s obvious a lot of time was spent in hammering out a specific vision for the game’s world.

If there was any downside to the visuals, there were a few areas where it was tricky to determine where you need to jump to transition between foreground/background or tiered areas, but none of those issues were a detriment to the gameplay. 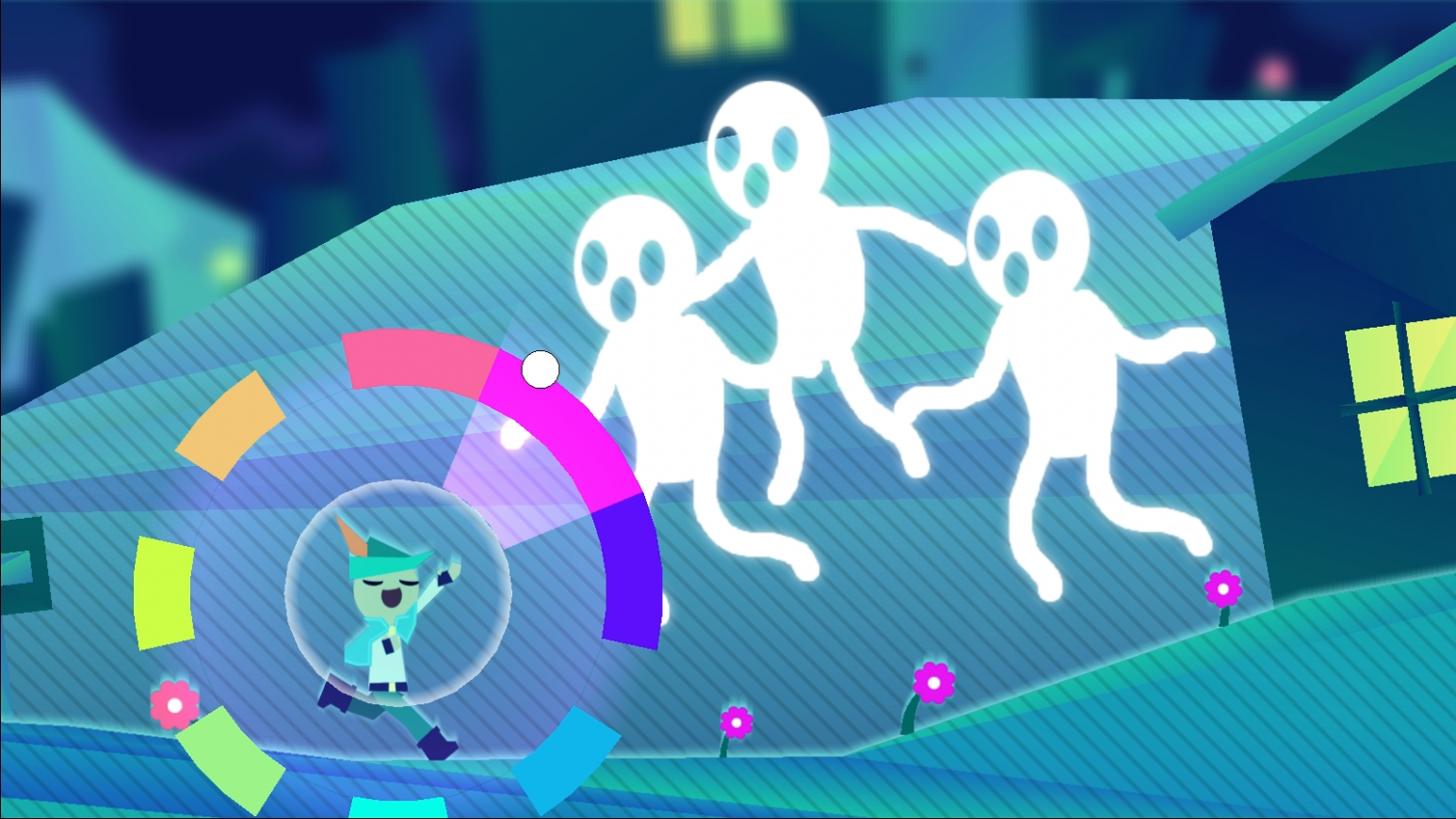 The game’s audio comes together with the help with sound designer Em Halberstadt (“A Night in the Woods”) and musician Gordon McGladdery (“Rogue Legacy”), and it is all pieced together with the same care as the graphics and story. Wandersong has players tilting the right analog stick (or using a d-pad) to belt out a variety of notes that change in real time as the player changes directions. These pitch effects are carried over to a number of the games animals, ghosts and humans, and samples were incorporated as appropriate to reflect a number of different instruments such as accordions, violins and wind instruments.

A lot of what is heard in Wandersong is low-key, but it all plays well with the bard’s voice being at the forefront of a large portion of the game. Still, the music fits the scene, with more adventurous tunes playing during the platforming scenes, welcoming music played while in towns and a number of happy ditties playing while interacting with certain characters. Each score is well done, and with a reported 147 different tracks in the game (which are available for purchase as part of an OST), Wandersong knows how to make the most out of its music in its expanse of scenes.

The musical effects are largely what carries Wandersong, but there are sound effects sprinkled into the mix to highlight the player’s actions. The characters receive simplified voice effects that lend to their personality and many of the different sections of the game world have environmental effects such as machinery or wind.

Wandersong is a pretty impressive presentation package overall. With nearly three years of development under its belt, Wandersong offers some of the best story, graphics and sound I’ve ever seen in a musical adventure/platformer.

Wandersong is based on music, but its “rhythm” aspects are fairly light, but that isn’t necessarily a bad thing. The core mechanic in play here is using the bard’s voice to solve puzzles, interact with characters and manipulate the environment while participating in bouts of platforming action. 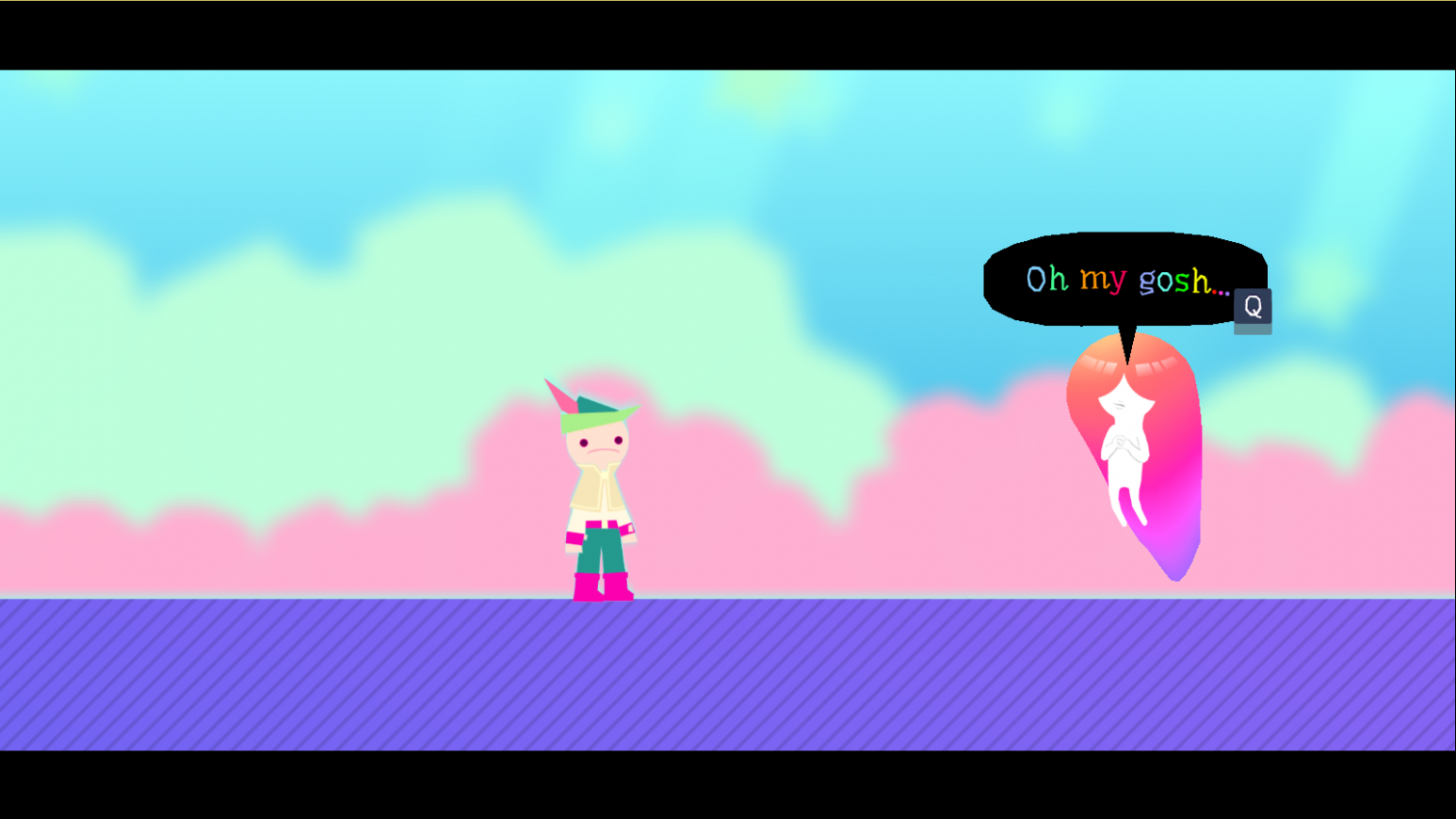 There are segments where “Overseer Songs” must be performed with proper timing, but a lot of other interactions can be entered by reciting correct notes in any timing, sort of like using Link’s ocarina in The Legend of Zelda: Ocarina of Time. Even when rhythm is a factor, timings are extremely generous, so it won’t be a gatekeeper to anyone trying to enjoy the game.

Controls are very simplistic, with the left analog stick moving the bard, the right analog stick used to sing, along with a button to jump and another button for contextual actions. The movement is very basic, but the charm of Wandersong is in the multitude of different ways the game utilizes the singing mechanic in unique ways all throughout the adventure. While interacting with other characters remains mostly the same, each environment introduces news ways for the bard to interact with something needed to progress.

Some of these interactions involve timing, others involve puzzle solving or exploration, while other sections involve unique segments of light stealth. As a testament of how well this game comes together, I personally hate a lot of stealth implementation in video games, but the short segment in Wandersong was fun and well done. Even though the bard is devoid of physical combat ability, there are still a few fights in the game that hinge on supporting characters, and these add in a blend of action and puzzle solving to the mix. 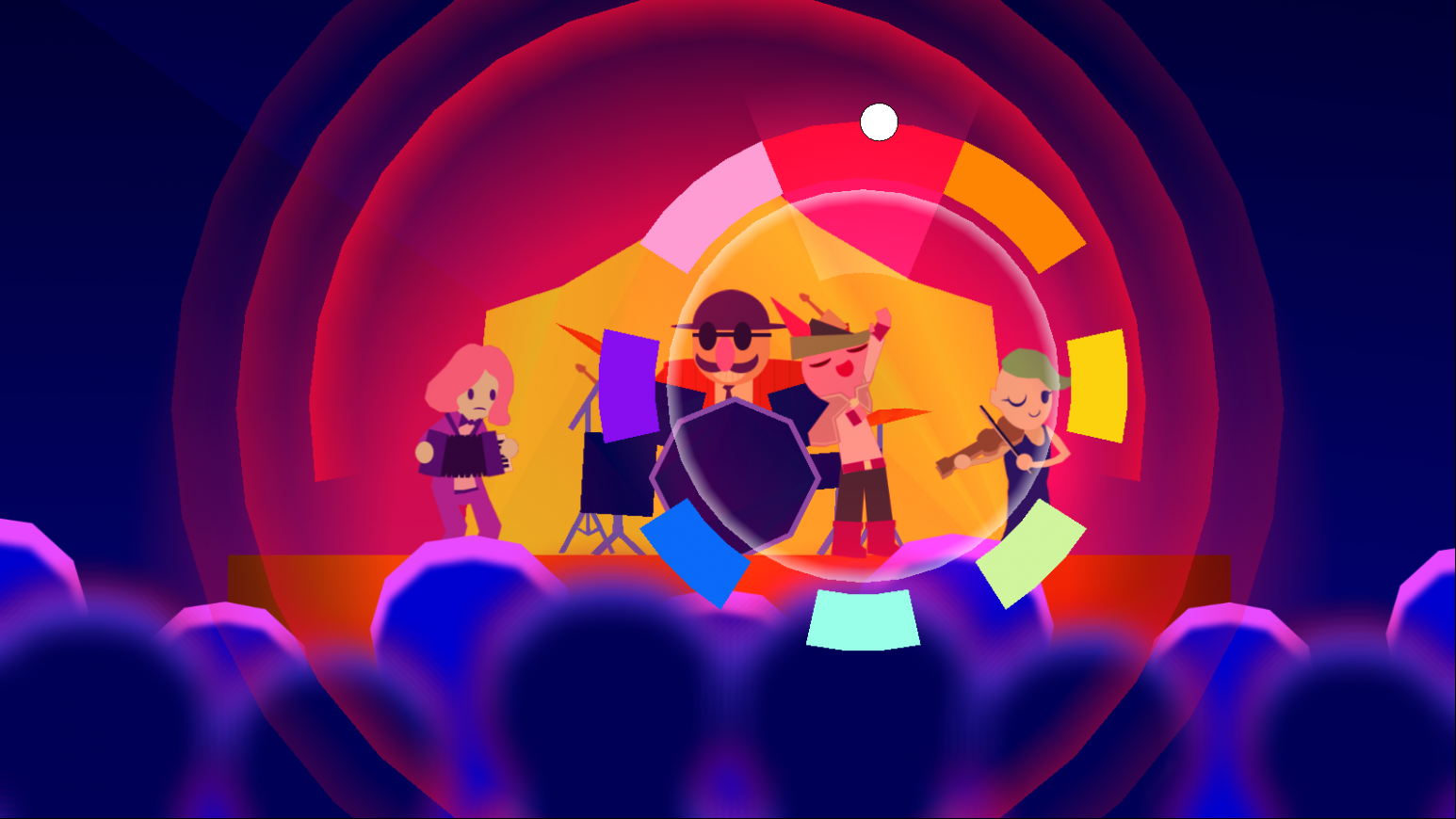 What’s also great about Wandersong is that any time the pace starts to wear a little thin, the game throws in something really unexpected to snap your attention back. This culminates in a segment that happens about halfway through the game, but I wouldn’t dare spoil this for anyone!

And while the basic flow of the game is the same throughout, each new environment throws small gimmicks at the player to slightly alter how they get from point A to point B and lightly cover each segment with a fresh coat of point. There are even changes on how the player navigates the world’s map, so a lot of thought was put into keep the game familiar while keeping things interesting for the player.

The platforming is also very forgiving in that the player can never truly die. If the bard falls from the platforming section, he is repositioned with very generous checkpoints, and puzzles are positioned in a way that they can not be messed up to cause a restart. Wandersong might not service those looking to be pushed to the limits of action and puzzle solving, but that clearly isn’t the point of the game, and it makes things very accessible to all kinds of players.

There were a few segments where, when the bard is in tight, enclosed spaces, the jumping physics were a little weird, but the control and gameplay of Wandersong is another piece of the game where everything comes together in a very satisfying way.

Wandersong can easily be a 10-12 hour experience for those looking to explore every nook and cranny the game has to offer. There are a ton of optional conversations the player can have with characters, and there are secrets in the game, such as going to out-of-the-way places to encounter a character that unlock a variety of goofy dances that awaken within the bard. The post-game of Wandersong might be considered a little light, but, considering the experience of getting to that point, I believe the game does a lot to tie up any loose ends as it possibly can and dedicated players will likely want to revisit at least some portions of the game and its story.

Simply put, Wandersong is one of my favorite games of 2018 so far, and it may very well be the best music-inspired platforming/action game I’ve ever played. It doesn’t quite serve the fanbase of timing-based rhythm gaming, but those looking for light-hearted storytelling, satisfying puzzle solving and a lot of variety will be pleased with this purchase. Wandersong puts forth an incredible presentation effort that is highlighted by very effective use of detail and creates a fleshed-out world that I think a lot of players will actually care about by the end of the game.