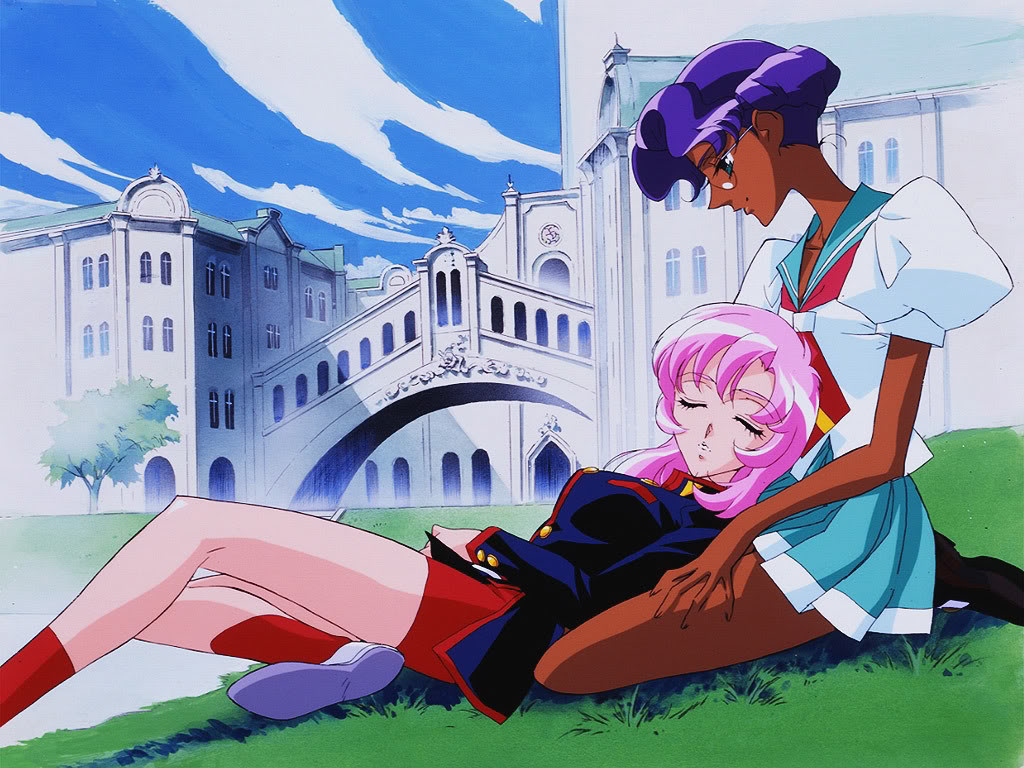 Anime really hit a strong and experimental stride in the second half of the 90s. So many of the most critically acclaimed shows and films of all time came out during the time period, including but not limited to Neon Genesis Evangelion, Cowboy Bebop, and Ghost In The Shell.

It was a time period where some of anime’s greatest creators were allowed free reign over their productions and the audiences came away with some of the medium’s greatest works.

While the three works above, as well as the Studio Ghibli offerings from that time period, are probably the titles from that creative burst that have most stood the test of time and popularity, they aren’t the only titles worth talking about.

Fresh off directing a whole bunch of Sailor Moon, odd ball director Kunihiko Ikuhara known for his unique visual presentation was given the okay to create an original series; The now cult classic Revolutionary Girl Utena.

What a revolution it was too!

Not many shows get named in the same breath as Neon Genesis Evangelion, in terms of both artistic presentation as well as genuine depth, but Revolutionary Girl Utena is one them. A nuanced and celebratory take on the older Shojo Hero genre, which the magical girl sub-genre was born from, Utena broke a whole lot of ground.

The off the rails gothic shojo visual direction, queer sub-text and the breaking of gender roles, all that purposeful repetition and cheesy music, Revolutionary Girl Utena stands as a one of a kind show to this day that in modern fandom too few people have seen.

Revolutionary Girl Utena is a lot of things to a lot of people with everything from its high concept story, one of a kind visual direction, and even some overt queer things winning people over to the show. Hat’s off to Kunihiko Ikuhara for creating a work that ultimately strikes out on many levels. One problem when discussing Utena though; Fans often talk about the metaphor, the theories, and the behind the scenes more than the plot itself.

To simplify Utena, it’s the story of the titular Utena taking on her school’s student council in a series of battles that for whatever reason are deemed okay. Early on Utena meets Anthy Himemiya who, due to some school rule related nonsense, is basically a slave to one of the members of the council. As Utena attempts to free Anthy from the School Council’s physical and psychological grip, they sure do find themselves getting closer and closer.

The Most Striking Characters In Revolutionary Girl Utena

Our noble hero, the indomnitible protagonist Utena won’t stand for injustice and time after time, literally every episode in fact considering it’s actually a bad guy of the week sorta show, she’s willing to put herself on the line to do what’s right.

As much as that sounds stereotypical in practice, what makes her different from a Goku or a Luffy is how much she strives to be this way. Idealizing a majestic prince from childhood on, Utena has actively predicated her entire life on becoming a genuinely good and noble person.

Anthy starts out in Revolutionary Girl Utena as a servant of the student council, and seemingly happy to be so. It’s pretty clear from early on that she’s stifling something underneath her skin but doesn’t come out in the types of emotionally cathartic moments you’d expect. There’s a lot more than meets the eye with Anthy Himemiya who subverts a lot for someone in her position, though Utena doesn’t much care about the hidden sides to her personality.

Touga Kiryuu will do absolutely anything to obtain power. He thinks nothing of utilizing violence, manipulation, and double crossing any and everybody to that end goal. While it doesn’t forgive the person he’s become, Kiryuu comes from a truly tragic set of circumstances that force you to empathize with him a little.

A twisted and narcissistic asshole, Saionji clawed his way up to the student council due to force of will alone. Utena’s first big obstacle and one of Anthy’s biggest abusers, he’s the show’s first real bad guy. He’s the vice president of the student council, and knowing he’ll never be as good as Touga at anything haunts his every waking moment.

One of the council members who isn’t a complete scumbag, Juri both gives off a noble aura and isn’t that devious of a person. Though she harbors a secret love for a certain person.

Maybe the nicest member of the student council, Miki is a genuinely good-hearted boy who unfortunately got tied up with the council due to his popularity amongst the student population. He just wants someone to love.

Poor Nanami, mostly played up for comedy relief and at one point gets turned into a Cow. She’s the younger sister of Touga, and she’s absolutely obsessed with her older bother to the point she’ll resort to anything to keep other girls away from him.

Akio Ohtori is the acting chairman of this insane school where these kids keep blathering on about fate as they try to kill each other with swords. He also happens to be Anthy Himemiya’s older brother. Now, why would someone who’s actively in charge of this entire school allow his younger sister to be slave to the student council?

Not really a spoiler to say something’s fishy with this guy.

Revolutionary Girl Utena is essentially broken down into three thirteen-episode arcs, and Black Rose arc’s big bad. A master of psychology and persuasion, instead of doing his dirty work himself he talks one student after another into dueling Utena for power. Considering Utena’s actually a good and thoughtful show, he sure does have his reasons for doing something so drastic.

The Utena Movie Revolutionizes The Series One Step Further

People who’ve heard about The Adolescence Of Utena but haven’t seen it have been known to ask ‘ Do people really turn into cars?’ Yes, yes they sure do. The Utena movie came out in August 1999, nearly two years since the series had finished towards the end of 1997.

A popular convention at the time, Adolescence was one of those anime reimaginings as opposed to being some kind of sequel or prequel. In its relatively short 87 minute run time it turns the entire series on its head and then some with people turning into cars being only one part of the puzzle.

While we don’t want to say more about the story in case some fans have yet to see it, we do have to note the film also scales up Utena’s already impressive visual presentation. Having a bigger budget and only having to worry about a movie’s length of animation to do, Ikuhara lets loose with the best visual direction and animation of his career.

You Can Skip The Utena Manga If You Really Want To, But Maybe Don’t.

While the Revolutionary Girl Utena manga predates the airing of the show by about 8 months, it wouldn’t be completely correct to say that the manga came first. Kunihiko Ikuhara planned out the anime and manga at the same time, with the manga sort of being an alternate take on the story. Just because it jumped the gun on the anime doesn’t make it the original; The anime’s the centerpiece of the franchise.

That said, Chiho Saito’s adaptation of the auter story does contain some merit! It presents a more outwardly and traditional shojo take on this nuanced defiant tale. That’s not to say it makes Utena a traditional shojo manga, then it wouldn’t be Utena. It does offer different perspectives and those who loved the series, or are just trying to understand a little better, may find something valuable in the manga’s 5 volume more concise take on the tale.

Where Can You Watch All The Episodes Of Utena?

Right now, the best place to check out Revolutionary Girl Utena is on disc. Yep, if you want to see one of anime’s greatest series you’re going to have to shell out the cash. A few years ago Nozomi entertainment rescued the beloved, long out of print series from oblivion and remastered it for DVD. More recently, they put out an even better-looking blu ray that’s worth every penny.

However! If you don’t have the cash to dosh for Utena right now, last summer Funimation made the announcement that the series would be coming to their streaming platform some point in the future. While it hasn’t been made available yet, we can only hope they’ll make due on their announcement soon. Other Nozomi entertainment titles which were made as part of said announcement like Boogiepop Phantom have been popping up on the Funimation Now streaming service which starts for a reasonable $5.99 a month.