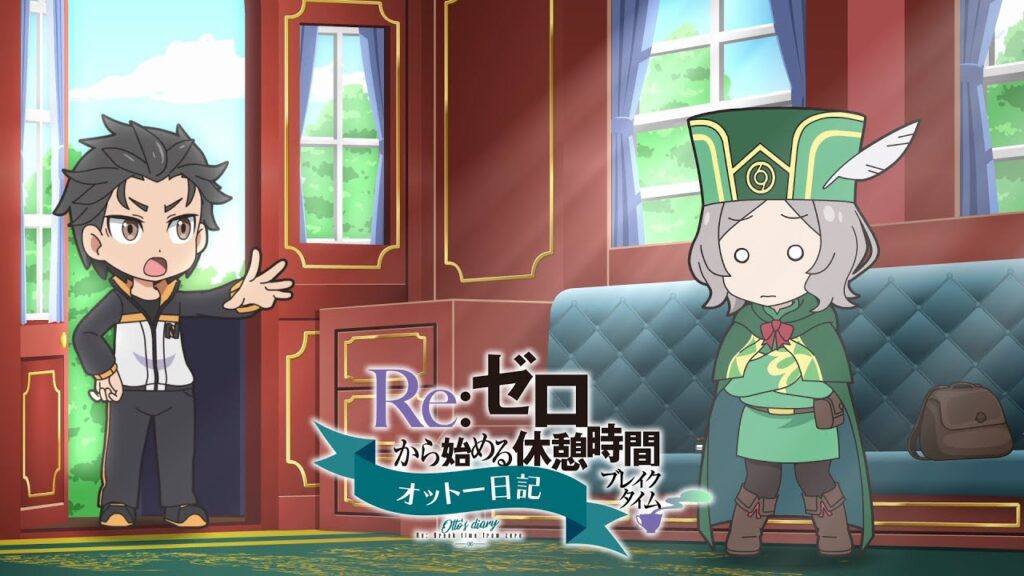 Way back in 2016 when the original series of Re:Zero aired on TV, a more light-hearted, comedic short anime aired on Kadokawa’s YouTube channel following each episode. Considering how bleak and suffocating the anime could sometimes get at its most intense moments, the short anime allowed fans to enjoy the characters and world of the series in a more light-hearted context. With Re:Zero episode 26 signaling the beginning of season 2 of the anime on TV, this chibi short anime Re:Zero Break Time has also returned to Kadokawa’s YouTube channel.

The first episode of this new short web anime is titled Otto’s Diary, as he writes down his adventures following the hectic events at the end of season 1 in the battle against the White Whale and Witch Cult. It’s his first time writing after a long break, as he suddenly realizes it may be best that he logs his journey as you never know when you might die (and he really thought he was about to in that attack). He contemplates how close Subaru feels he is to him despite them not having known each other for too long, before Subaru suddenly interrupts and talks about Otto’s desire to meet Roswaald, or the ‘perverted clown’.

Considering how serious the premiere of the new episode got as it continued right where the original series of the anime left off with the introduction of more members of the Witch Cult and the disappearance of Rem’s memories from the minds of everyone but Subaru, this is a nice ‘calm before the storm’ moment with a lot more humor that the normal series often lacks. Just like with season 1, there’s nothing here that’s required viewing if you only want to follow the story of Re:Zero, but if you’re a fan there’s a fun 3-minute short anime airing on a weekly basis featuring the characters you know and love.