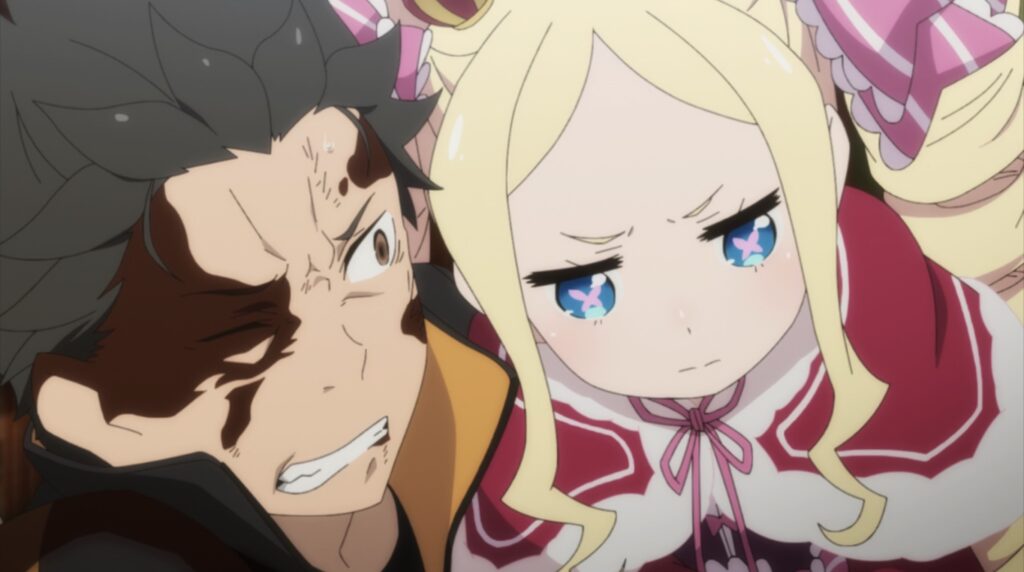 Despite the wide-ranging possibilities that the conclusion of last week’s episode presented us with as Subaru was saved from certain death by Beatrice, Re:Zero episode 32 is a rather straight-forward episode. Certainly the most straightforward episode of season 2 so far.

This simplicity helps us gain our bearings after an avalanche of action and information in recent weeks, but it also presents us with perhaps the weakest episode of the season so far. It poses interesting questions, sure, but my biggest disappointment comes with how these ideas are presented, and how little has been done to take advantage of them in the immediate present. 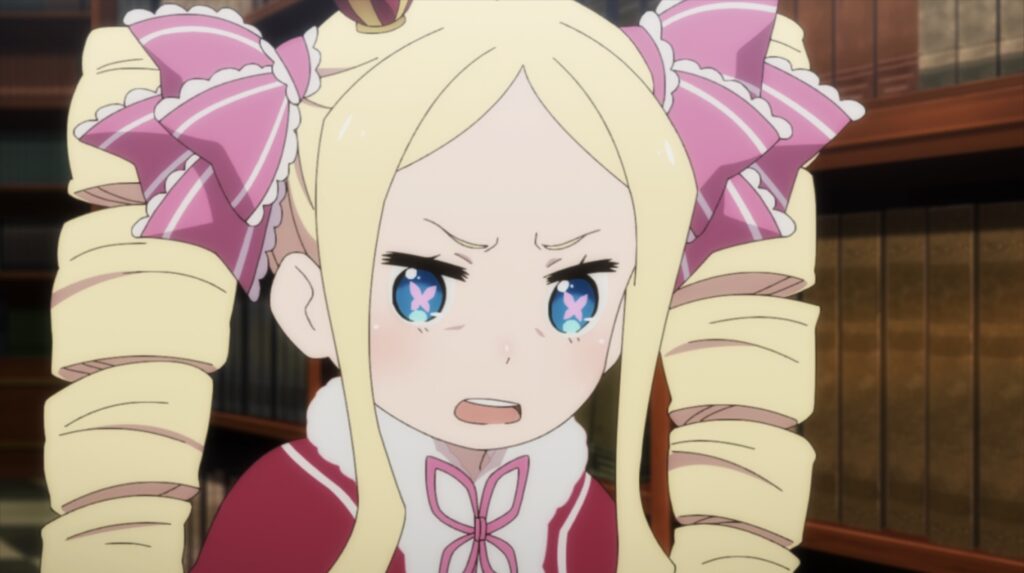 The episode opens right where we left off last week with Beatrice inviting Subaru into the library instead of allowing him to rescue Rem, saving his life while dooming hers. This mostly appears to me as a problem with where last week’s episode left off than anything else, but by choosing to end the episode at that moment it created a fascinating cliffhanger to ponder over the next week.

Since we as an audience are aware of how Return from Death works at this point, and how progressing too far can reset the return point, ending the episode at that moment emphasized the despair of possibly losing Rem and everyone he cared for in the mansion. Salvation, usually a saving grace in most series, was a source of anger and despair.

All these possibilities are undone in the opening minutes of Re:Zero episode 32. While I love this scene with Beatrice as we see her overcome with emotion and the tease that she may be directly involved in the Witch’s Cult and betraying them with her actions, it ultimately amounts to very little. I would have liked to see a new reset point, maybe one that partially set in stone these actions if not their deaths, but we don’t. 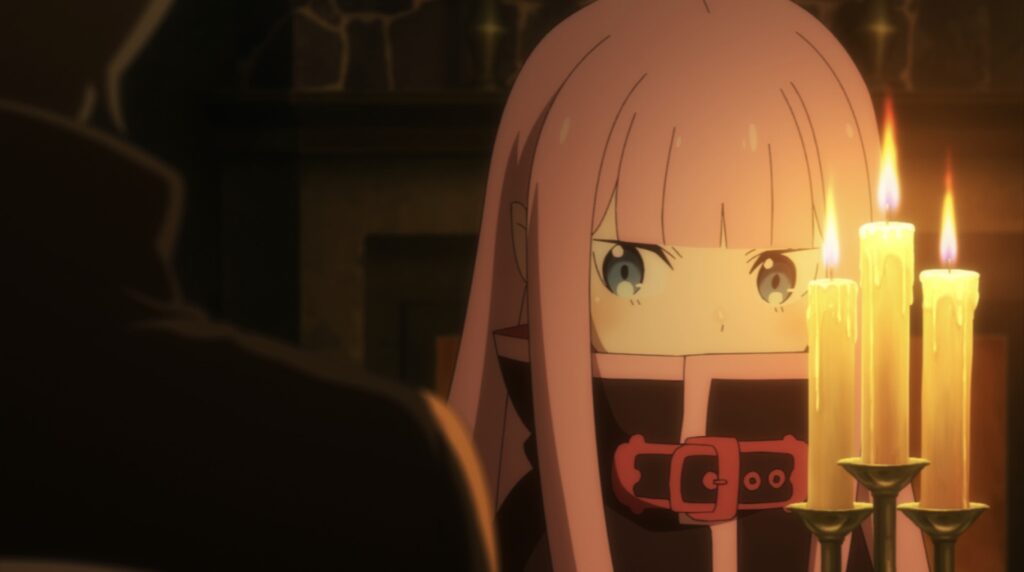 The information on Beatrice is designed to be the hook that justifies the scene and leaves us wanting to know more, but simply knowing about this doesn’t change the challenge of leaving the Sanctuary or saving the mansion. It can, and inevitably is, shifted to the back of our minds, dulling its impact.

The rest of the episode following this point sort of meanders in and out of focus. Subaru’s complacency with knowing what to expect comes back to bite him as it has in the past when events don’t go according to the calculations, but there’s no impetus for these events taking place. The reasons for Garfiel acting differently are seemingly random, and we learn very little from the detour that results in it. The betrayal that sees him imprisoned again lacks consequence, as he’s saved in time to still potentially save things and help out. 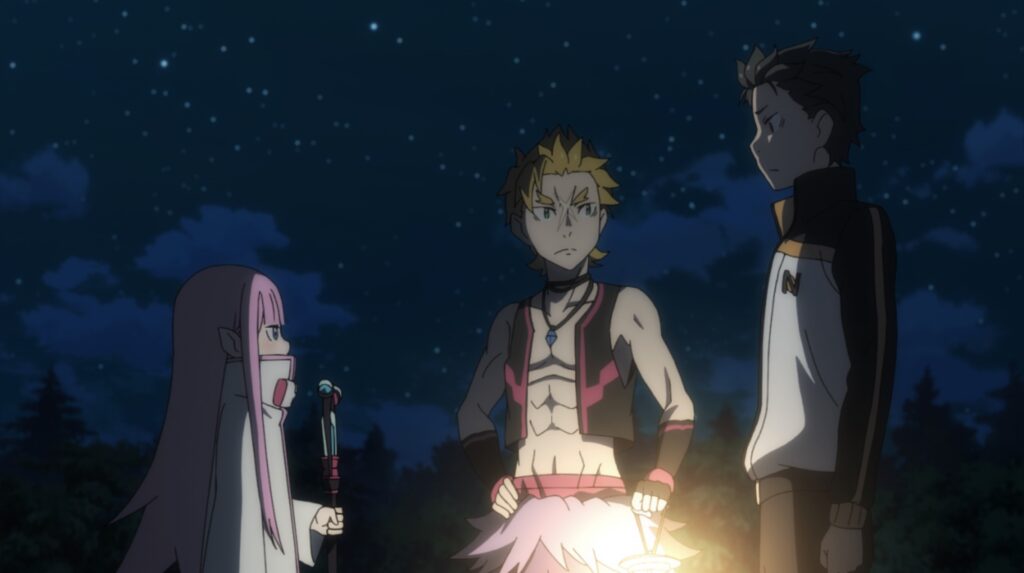 If there’s one thing I can appreciate about this episode, however, it would be the increased attention given to Otto.

Having been introduced as a merchant traveler in season 1 who was willing to kick Subaru out of a moving carriage to save himself, it’s been welcoming to see just how much he has grown throughout the past few weeks. He’s become more assertive and more protective over people he can now call his friends. While the online short series airing alongside the series is comedic and non-canon, this trait is being reinforced heavily in the diary entries that drive that short series, and it’s been nice to see the character grow into a dependable member of the main cast as the season has gone on. 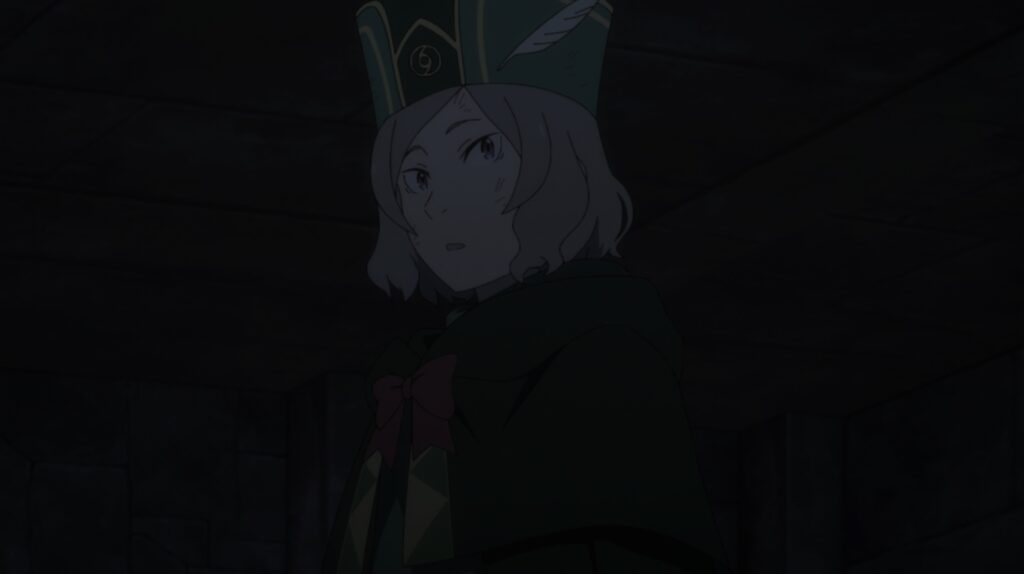 All in all though, even if I like how the ending pays off Otto’s growth and there are some strong scenes here and there, I’m left disappointed by Re:Zero episode 32. I felt like it stumbled for the first time this season. Still, I have confidence it can pick itself up. I’m not concerned.

©長月達平・株式会社KADOKAWA刊／RE:ゼロから始める異世界生活2製作委員会
Re: Zero -Starting Life in Another World-Review
Join Our Discussions on Discord
Join Now