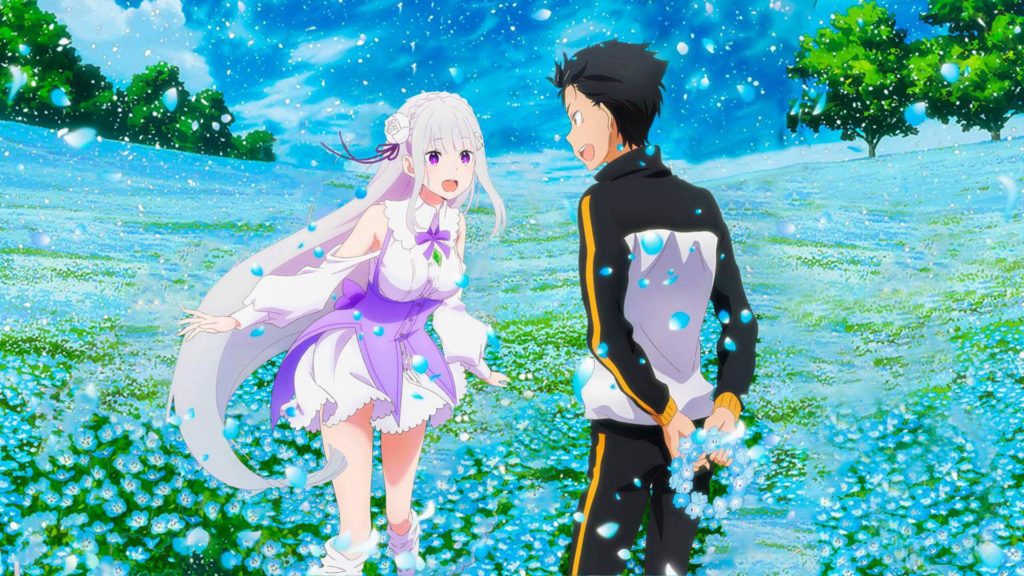 When Re:ZERO -Starting Life in Another World- began airing during the Spring season back in 2016, it was easy to assume that it was going to some typical fantasy light novel affair, in a world that was already awash in the “isekai” genre. I remember quite clearly the few weeks span during which the show evolved its status as an enjoyable outlier to all-out smash-hit, due in no small part to its stellar cast of characters, and little aversion to some truly ruthless action every now and then.
As for what you can expect from this new OVA, I’ll go ahead and say that you’re going to want to expect a ton of attention paid towards developing the aforementioned cast, and little of that latter aspect.

Re:ZERO -Starting Life in Another World- Memory Snow serves as a sort of side story, chronologically taking place between episodes 12 and 13 of the anime, right after the Mabeast incident in the forest outside the village. At this point in the series, you could say that the main cast was at peace; mingling together and living as one big happy family under Roswaal-sama’s roof. What other point then, would be better to see some of that delicious character exposition?

You most likely don’t need me to tell you that the episode revolves heavily on snow, and the circumstances behind its sudden falling were quite amusing and hardly sinister in nature. In fact, I found myself letting out quite a few laughs there in the theater with my fellow audience members. When I heard Subaru describing his epic quest thus far in a long string of questionable English, I just about lost it. I dare say that the episode’s comedy was one of its absolute strong points. There are puns and visual gags aplenty, as Re:ZERO’s unique brand of humor was dialed up to 10. Jokes are not the only thing that served up in the visual department, however, with quite a few wildly-cute fan service shots sure to please all, ahem, no matter which team you might be on. I really appreciated the balance in screen time given to everyone, most especially to little Beatrice, who I felt was lagging behind a bit in the main series.

The animation was very consistent, ranging from the relatively high-grade style found in the main series, to absolutely gorgeous when highlighting some of the climactic scenes amidst the falling snow. After everything was said and done, the OVA’s theme song, nonoc’s “White White Snow”, floored me with its ability to transport me into a snowy landscape. Her delicate vocals and whispy melody seriously rival “Stay Alive” for the top bit of music the franchise has to offer.

As far as my favorite part of the 60-minute episode goes, you’ll first have to know that I am quite on the side of Emilia-tan, MAJI TENSHI. If you don’t want some slight spoilers on one of the gag bits, then I advise skipping to the next paragraph. If you’re still with me, however, then know that it was absolutely impossible for me to wipe the smile from my face when she, let’s just say, tried a certain something for the first time in her life. The next 15 minutes are some of her cutest moments to date, and I think that’s saying a lot. All in all, if you’re wanting a bit of a slice-of-life take on the Re:ZERO universe; I mean, come on, give these characters a break — then you should definitely be looking forward to this OVA. The theater environment I watched it in served to accentuate the superb music and visuals, and I hope that an even wider audience gets the chance to experience it that way. If not, this is still a solid A+ OVA that you’re going to want to see one way or another!