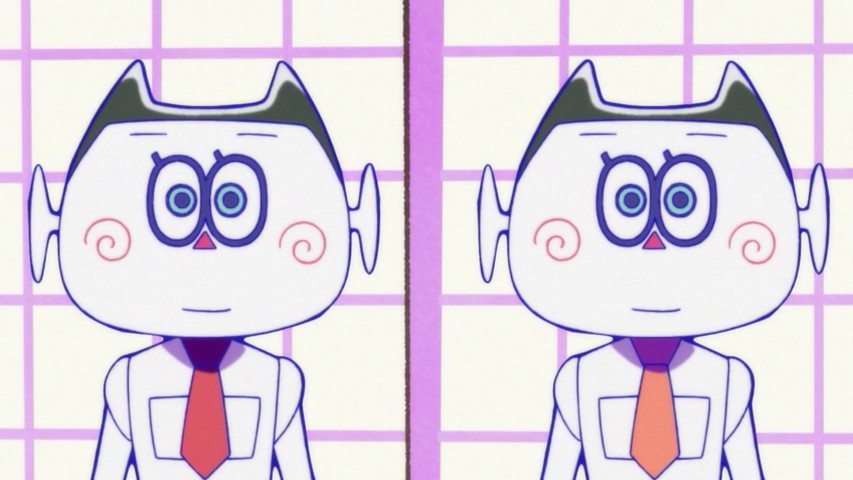 If you’ve been watching the latest season of the anime series Osomatsu-san, the ‘Rice Balls’ (or Omusubi) should need little introduction. Since their debut in episode two of season three, they’ve been unusual and interesting additions to the cast. What are they? What do they represent for the show? Or for humanity as a whole? 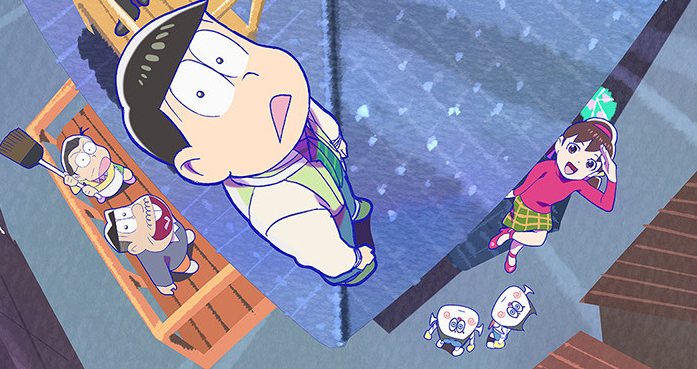 The Rice Balls first appeared in a promotional visual which came out in September (above). They’re down at the very bottom, where you might not even notice them. The mysterious pair doesn’t look human. Are they aliens?

As we now know, the truth is even stranger. They’re artificial intelligence robot buddies, apparently programmed to help the sextuplets. After some initial suspicion, the Matsuno brothers accept them, name them Sake and Ume Omusubi (literally Salmon and Plum Rice Ball), and generally treat them like slaves. It didn’t take long for the always-attentive Rice Balls to learn the insulting nicknames that the brothers gave each other. In episode three, the Rice Balls started analyzing and evaluating everything, including Chibita’s name (insulting) and Totoko’s estimated value (worthless).

There was a lot of comedy/ cringe humor involved. But did it also provide some clues about the true nature of the Rice Balls?  All of their helpful analysis seems to cause friction or anger. 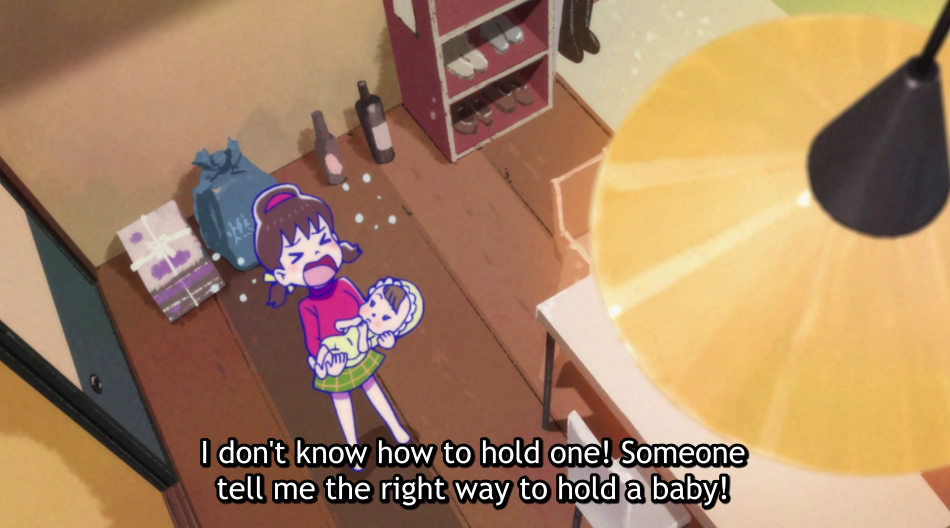 However, the season hasn’t been a steady diet of Rice Balls. A lot of the comedy stuck to the show’s successful formula of wacky NEETs and meta humor. The first episode featured the brothers re-gaining control of their show, including an awesome Demon Slayer parody.

The Rice Balls disappeared almost entirely in episode four. But that episode had one other surprising twist to it: Totoko’s rival idol Nyaa Hashimoto is now a single mother. I thought the episode handled the issue well. Totoko actually does care about her friend/ rival/ frenemy. It is cute how Totoko doesn’t know how to deal with babies. It’s still Osomatsu-san, so there’s a lot of humor to it. But they treated the situation seriously.

Episode five was another surprising one, as a huge chunk featured the brothers discussing life on their way home from a wedding party. It was funny, but also touching.

But in the sixth episode, the Rice Balls returned in a big way. They ignored the eldest Osomatsu. (Uh-oh.) Instead, they concentrated on Ichimatsu and his love of cats. Once again, we see the excessive use of data and analysis. They calculated the most likely places to find cats. But in doing so, they took the fun out of it. It’s cute to watch, but also deep.

The seventh episode was much more traditional for Osomatsu-san: silly gags, parodies, and weirdness. We also learn that the Rice Balls can imitate voices, which lead to some great gags.

For a series as goofy and silly as Osomatsu-san, they have been dealing with some weighty issues this season. After a few seasons, it’s good for a series to expand its boundaries.

The Rice Balls are clear analogies for our real-life anxieties about ‘robots taking over.’ It’s a cliché, but self-driving cars, drones, and other technology have pushed us in that direction. What role will there be for NEETs in the future?  Will we all be NEETs in the future?

I look forward to seeing where these Osomatsu AI hijinks will lead.