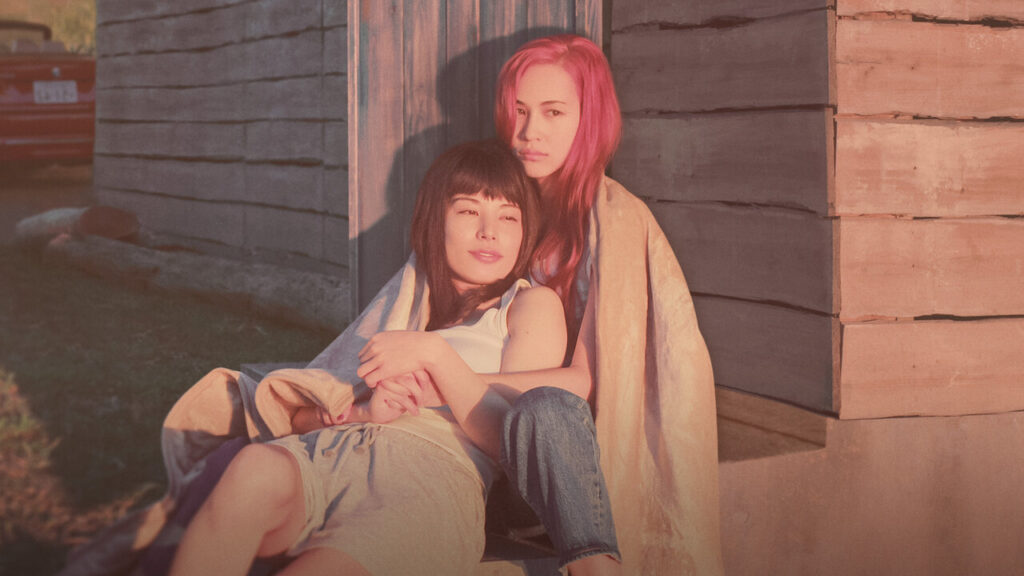 Ride or Die opens with an impressive four-minute long take that starts with Rei Nagasawa (played by Kiko Mizuhara) stepping out of her car on a Tokyo street and entering an underground bar. We enter the bar behind Rei and keep our distance as she finds a seat, with the scene abruptly cutting to jarring close-ups after she offers shots to a lonely man sat alongside her at the counter.

Fast forward a few minutes and they’re having sex in his luxury Tokyo apartment. Suddenly, Rei takes advantage of the moment to slice his throat, killing him. The man, it turns out, was the husband of her unrequited object of affection, Nanae Shinoda (Honami Sato), and she killed him on request due to his violent and abusive behavior.

Ride or Die is a lesbian romance film about two women who find themselves on the run following a murder. The pair had grown distant and lost contact since their school days, with Rei starting a new life with an older woman, when suddenly Nanae calls her out of the blue after ten years. Desperate for a loving touch, that’s when Rei learns about the domestic abuse she has been receiving and resolves to enact her revenge.

It would be fair to say that trailers for Ride or Die helped it to become one of my most anticipated films for the first half of 2021. Although I am unfamiliar with Ching Nakamura‘s Gunjo manga, from which the film is liberally adapted, the series has generally been praised for how it handles lesbian relationships from an author who also identifies as a lesbian. The author noted in an interview that the manga’s content was driven by wanting to create a story about ‘living a life of hiding I was gay’, which gave me hope that this rare major Japanese film production centered on a lesbian couple would handle the topic with care.

Even beyond its place as a major LGBTQ+ Japanese film, the film was proudly doing something we haven’t seen attempted in many Japanese movie productions before. Netflix’s involvement meant the film didn’t have to contend with traditional theatrical releases in a way that allowed the film to be far more explicit than would otherwise be possible, both in terms of violence and sexuality. The film promised a careful, passionate portrayal of Rei and Nanae’s feelings for one another while using the freedom of streaming to portray a level of closeness rare in Japanese cinema.

Unfortunately, the film is not successful at handling Rei and Nanae’s relationship, nor does it get strong marks for its handling of the sensitive subject of domestic violence. 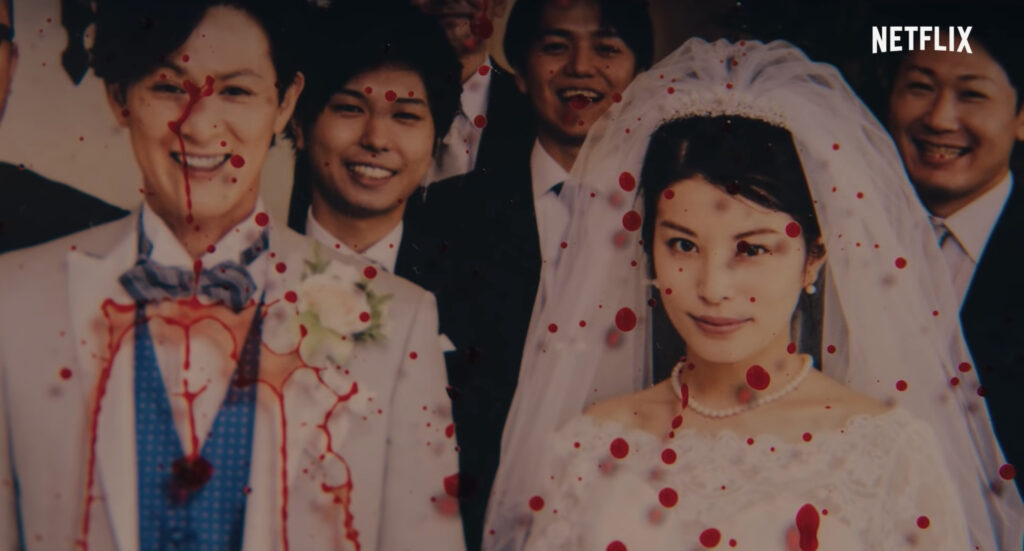 When so many areas of society center on the male experience and the status of men in comparison to women, it can’t be overstated how much lesbian relationships are driven just as much by their decentering of the male ego and a non-attraction to men as they are by a mutual attraction to women. Lesbianism is a direct rejection of a male-centric viewpoint on the world, and in turn, the male gaze. Yet the portrayal of lesbian relationships in everything from TV to porn is often with the male viewpoint in mind, turning intimacy in the absence of men into something consumed and intended for male sexual gratification.

With a male director at the helm in Ryuichi Hiroki (albeit with a female screenwriter), we unfortunately have another film that panders to the male gaze and prevents us from becoming intimately familiar with our two main characters. One particularly sordid example is a key scene early on, just after the pair decide to run away together, disregarding the original plan as Nanae can’t allow Rei to accept blame for the situation alone. It’s a moment of Nanae reaching out and closing the gap between them.

Instead of allowing these characters to examine this decision of running away together and come to an understanding, we instead cut to a scene of Rei’s blood-soaked buttocks as she attempts to clean the blood from herself in the shower, followed by the pair sharing a bath without closing the gap or coming to terms with the murder that now ties them together. Instead of witnessing their yearning and growing bond and gaining a clear understanding of what the other is thinking, all we get are naked bodies and shallow eroticism. 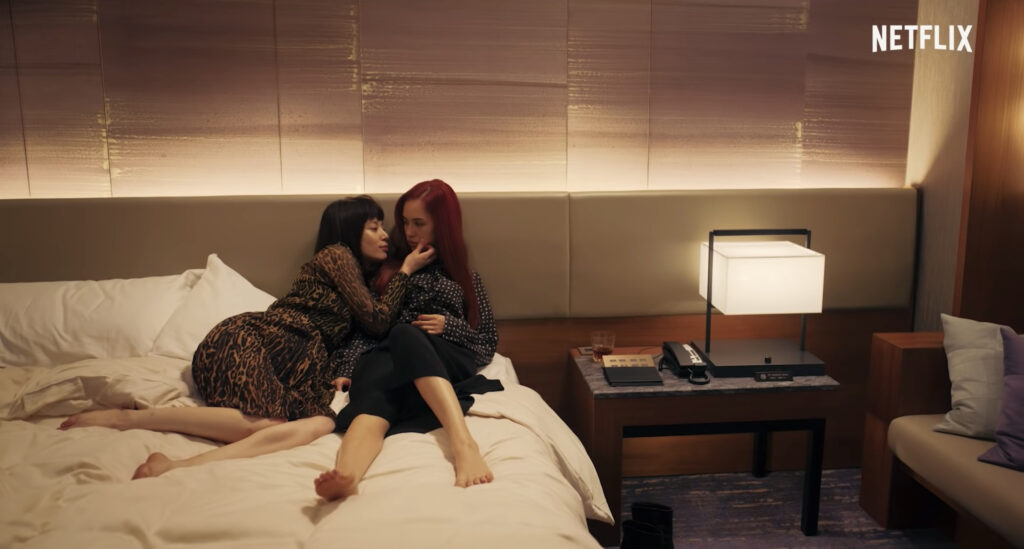 In addition, despite explicitly stating that Rei was a lesbian, the camera leers over moments where Rei uses her sexuality to gain advances over the men around her, even later in the film, which serves to frame her as someone attainable to men in a way that invalidates her sexuality.

The relationship between our main characters is complex and raw, driven by years of regret, pain, and affection that morphs into a toxic relationship that threatens mutual self-destruction. But while the framework to tell that story exists within the film, an inability to put their feelings at the core betrays the complexity of their emotions and prevents us from getting a glimpse at how this defines who these people are to themselves and each other. The film teases ideas of love, suicide, and passion that never feel genuine because their relationship is unbelievable, while a supposedly cathartic and much-hyped moment of reciprocity embodies their distance, not their intimacy.

This comes before we get into the matter of Ride or Die’s handling of domestic violence. Similarly to how the film leers and objectifies the same-sex attraction between our two protagonists, the film repeatedly sensationalizes Nanase’s status as a victim for dramatic effect. We stare uncomfortably at her bruises, not to comment on the pain she has gone through but as a chance to stare at her naked, bruised body, while another scene sees Rei, understanding the traumatic nature of what Nanae has gone through, lashing out and beating her for little reason beyond the provocation of fear. 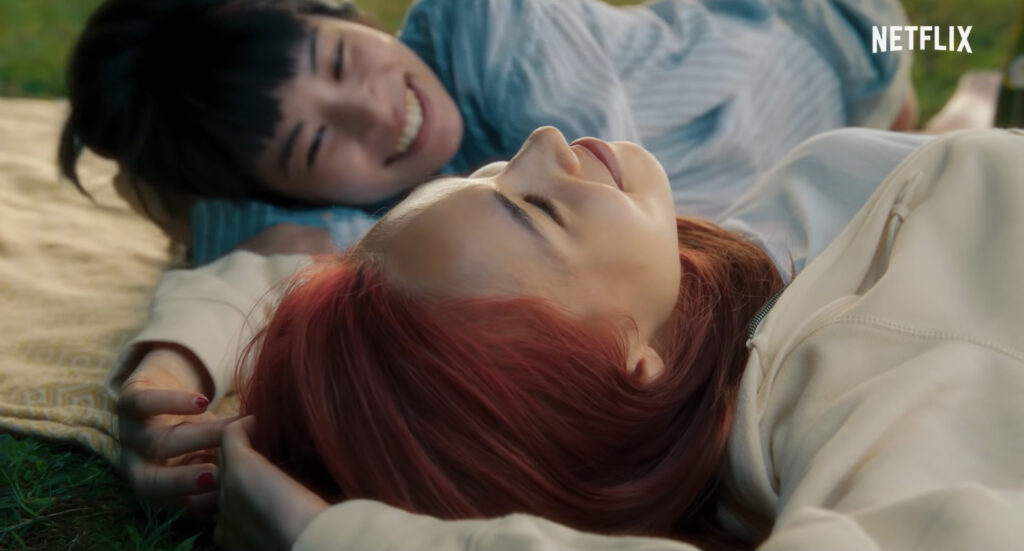 This is all so disappointing because there are moments that shine underneath all of this. Growing up as someone who is LGBTQ+ can be an isolating experience, one where you feel unable to openly express your true identity or, worse, you are ostracized by your peers and family if you are out and they don’t accept you. Rei is willing to commit murder and do anything for Nanae, not just because she is her childhood crush but because of how she broke through that isolation of her school life and reached out when no one else would.

Attempts to delve into her loneliness, driven by a great performance from Kiko Mizuhara, are where the movie is strongest. But this is only a rare glimmer of hope in an otherwise underwhelming film.

Before this film came out, the reason I was so excited for Ride or Die was that I was desperate for a Japanese film about lesbians that shines like the female-centric romantic attraction of films like Portrait of a Lady on Fire and Kajillionaire provided in recent years. While it has its moments, and is in some ways an improvement when it comes to mainstream lesbian representation in Japanese cinema, a lack of authenticity holds the movie back from greatness.

Ride or Die is currently streaming on Netflix.