Ride Your Wave Review: A Wave of Emotions From Masaaki Yuasa 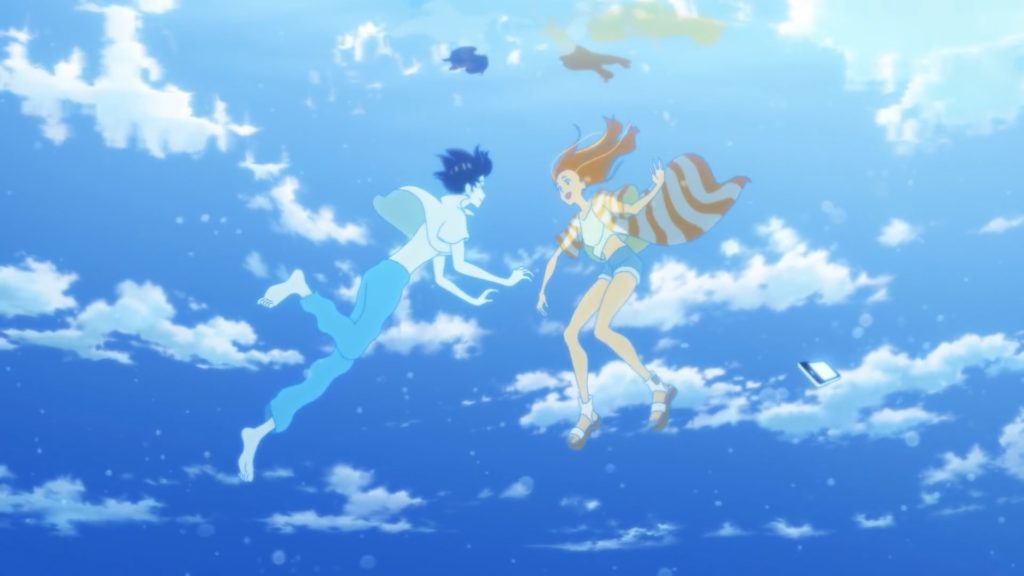 Going into a recent screening for Masaaki Yuasa’s newest film, Ride Your Wave, I was just as excited as I was filled with dread. It wasn’t a dread because I thought I would dislike the film. After all, nothing in the promotional material suggested it would be a bad film, the opposite in fact. My fear was that I’d come away feeling nothing at all.

Recently, I spoke about my concerns regarding one of my favorite directors in anime at the moment, Masaaki Yuasa. The director has a unique and instantly recognizable style with his willingness to exaggerate character movement and even form to portray a certain emotion to the audience, the loose animation style, a style recognizable even in his more subdued works such as Lu Over the Wall. At the same time, ever since the foundation of his own studio his workload and the quantity of project he’s worked on at once has increased substantially, almost to the point of saturation, and that it’s beginning to have a detrimental effect on the impact of his work.

If I’m being honest, the announcement of another film in the works for 2021 actually impacted my own personal excitement for Ride Your Wave. I’m worried that the quantity of his output is having an effect on the impact it’s able to have, and I’d be lying if I didn’t say that this thought wasn’t nagging in the back of my mind as I stood gazing out of the window on the busy express train to the cinema.

I won’t say that seeing Ride Your Wave has eroded my concerns I had about the rate of his output in recent years. At the very least, however, I can say that my fear of indifference didn’t come to pass, as what I saw in that darkened room was a captivating and charming romance film that, while another more subdued film lacking more of the experimental flair of a film like, say, Night is Short, Walk on Girl, is able to grip you emotionally while representing what I feel is the new standard of what to expect from the director going forward.

Ride Your Wave follows the relationship between Hinako, a surf-loving young girl, and Minato, a firefighter, after the latter saves the former’s life from a fire in their apartment complex caused by some teens misusing fireworks. While their relationship for a while seems like it’s going great, it all ends when Minato dies in a tragic accident. Unable to move on, Hinako realizes she can bring him back by singing their favorite song when near water and tries to grapple with the reality of his loss while he is still around in the water that surrounds her daily life.

One thing so crucial to a film like this yet something many films like this fall at the first hurdle with is creating a believable relationship between a pair of likable characters. It’s almost a little frustrating how many times I’ve found myself disengaging with a film because I just can’t bring myself to care for the characters in love, and at times, even when I do care, the structure and progression of their relationship feels a tad unbelievable. After meeting at the moment Minato saves Hinako’s life from the burning wreckage of her apartment they begin to become friends, before becoming lovers, supporting each other every step of the way.

I hope you like Ride Your Wave’s theme song, “Brand New Story” by GENERATIONS from EXILE TRIBE because it’s involvement in the film can’t be overstated. As the film’s mainstream hook due to the group’s popularity, the song is used constantly through the film as a theme for their relationship, a song they sing together and apart. Add in the fact that Ryota Katayose from GENERATIONS plays the role of Minato, there’s definitely no way you won’t notice their involvement. The song is featured throughout, yet despite its play count by the time the credits roll, the role of this song is more than just incidental or an attempt by Yuasa to get his money’s worth. The song has thematic and emotional importance, and a montage of our two lovers growing closer over a duet version of the song that isn’t entirely serious, with the duo giggling together as they sing as though reminiscing about a positive memory, is the moment that I feel genuinely sells this movie and makes it work. More than many anime series and films that attempt to cultivate a believable and down-to-earth relationship, this succeeds, and I feel this scene is to thank for that.

As the synopsis and trailers for Ride Your Wave suggest though, it’s not built to last. In a desperate attempt to save a drowning water-skier, Minato ends up drowning themselves. However, she soon discovers she’s able to see them again by singing their favourite song when near water, and, almost in denial about the fact he’s gone, uses this mysterious phenomenon to try and keep him by his side forever.

The film knows it can have fun with its characters and with the world its created and does have a sense of humor that made it impossible to contain my laughter during another incredible montage, but the themes which the movie wants to tackle are much more sobering than its exterior would let on. While yes, it remembers to have fun in order not to bog the viewer down, it is, at the end of the day, a film about grief and about coping with loss; a need to remember those you’ve lost without being held back by their absence.

The way it handles these themes is heartfelt and it succeeds in this thanks to, going back to what I said earlier, how realistic the emotional connection between our two star-crossed lovers is. You feel for the initial loss, you’re elated when they can reunite through their lover’s song, and as she learns to deal with grief and loss, you go on this journey with them. At the same time, this film can be seen as almost a warning for how grief can consume you if you aren’t careful, taking over and dictating your life if you don’t work through it. Sometimes, even a little help from those around you, whether they notice or not, is all that’s needed to begin the cycle of grief and to become stronger, retaining these memories and using them to move past their issues instead of becoming lost to them. 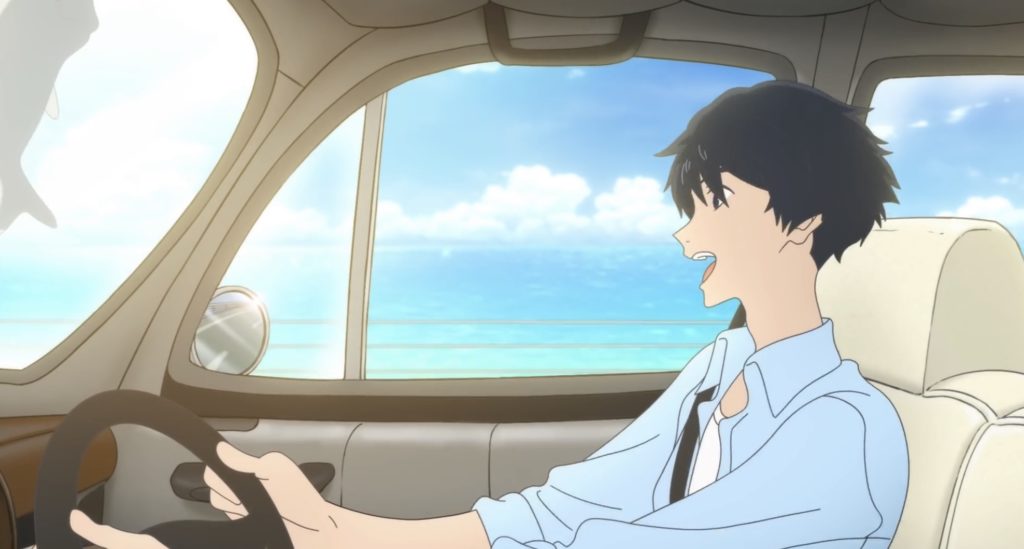 I note this film as being a new standard because it feels like a natural evolution of his style into a more mainstream form that follows on from Lu Over the Wall. Still retaining key hallmarks of his style, his work is noticeably more restrained, and the story it is telling is much more mainstream than some of his previous catalog of titles. While some Yuasa fans voice an opposition to his style veering away from its experimental roots to the style found here, I see it as an inevitable progressional step on his journey as a director that I don’t see him backtracking on unless he chooses to adapt another novel from Tomihiko Morimi (the author of both Night is Short, Walk on Girl and The Tatami Galaxy). While it would be easy to see it as a money-driven development, since a more mainstream film has a higher potential for box office success, I see it being a desired destination for him.

Even his upcoming 2021 film is one I see being much more restrained in its animation while still being undoubtedly a Masaaki Yuasa film in the final product. His use of Flash with Science Saru has helped to evolve and standardize his style more, I feel, when looking at his work with his self-created studio, and I view this as a tonal and visual standard for his work going forward.

It’s a good thing this is a standard-bearer, in my opinion, as the movie that we’re left with is genuinely a joy to watch from start to finish. A likable cast, strong animation and a heartfelt, if by-the-numbers, story come together with Yuasa’s trademark touch to create a product I can easily recommend to any anime fan regardless of whether they have seen or enjoyed his previous works, and I’d have no issue recommending the movie to non-anime fans as well.

I still have my concerns regarding the frequency of his output at the moment and going forward (exclusively on a critical level, however, as the workflow used by his studio ensures the working environment at the studio is one of the healthiest to be found in an industry notorious for overworking and undervaluing its employees), yet I came out of this film with a view that this is the best movie he’s put out since joining Science Saru and anxious to share my thoughts on why this film is a must-see for pretty much everyone.

That can’t be a bad thing, right?

The film is now showing in Japanese cinemas, and you can find out more on the film’s official website.