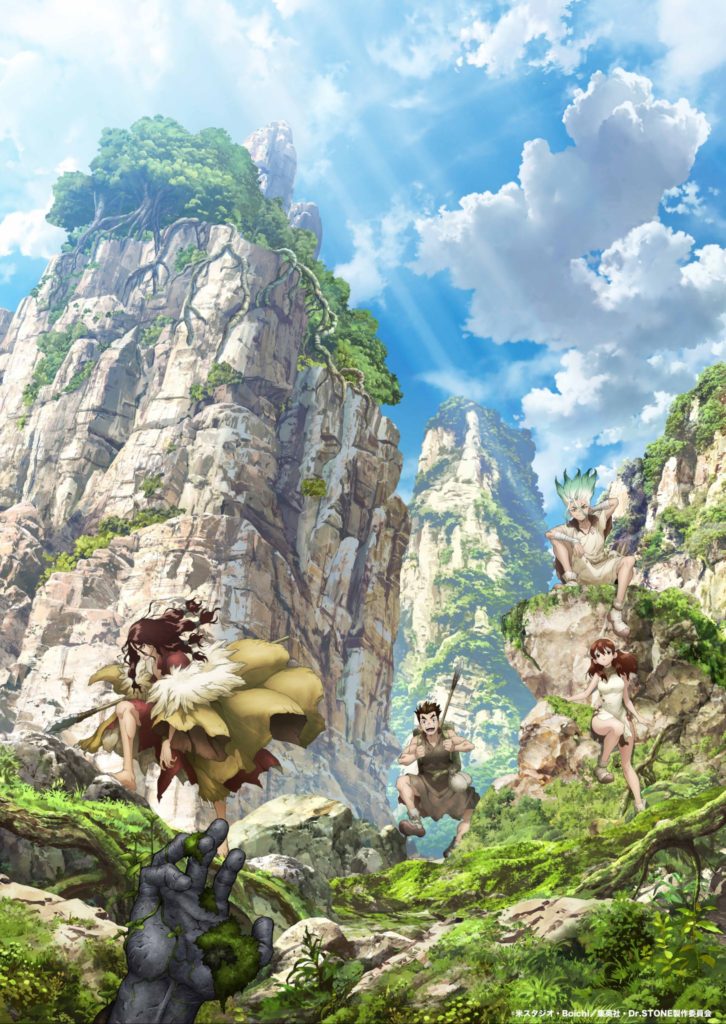 Dr: STONE is by far one of the most unique manga running in Weekly Shonen Jump right now, as it focuses on brains over brawn in a post-apocalyptic survival drama. I’ve long been interested in how author Riichiro Inagaki managed to craft and maintain such a unique story in collaboration with artist Boichi, and a new interview with Comic Natalie gives us a little insight into just that.

The interview was carried out to promote the first volume release of Arata Primal: The New Primitive, a new series currently serialized via Shueisha’s online Jump Plus service and available in English via MANGA Plus. Arata Primal also focuses on characters from the modern day trying to survive in a primitive era, making it a natural foil to Inagaki and Boichi’s Dr. STONE.

Even though the interview was supposed to promote Arata Primal above all else, Inagaki ended up spending a fair amount of time talking about his own series at the behest of Arata Primal artist-writer duo Katsutoshi Murase and Daisuke Oikawa, who clearly respect Inagaki’s work a whole lot.

One of the first things Inagaki was asked was, fittingly, how he came up with the idea for Dr. STONE in the first place. According to Inagaki, it all started with the characters. He’d noticed that many shonen protagonists were kind of flashy, with crazy super powers or abilities, and thought that it might be kind of cool to have a more “normal” protagonist for once.

Thinking about the world in general, Inagaki also reckoned that there was no real need to make something up when there’s already plenty of people who are pretty cool in their own way, yet don’t get much of the limelight – such as scientists and researchers. Thus, the foundational idea for Dr. STONE’s protagonist Senku was born. 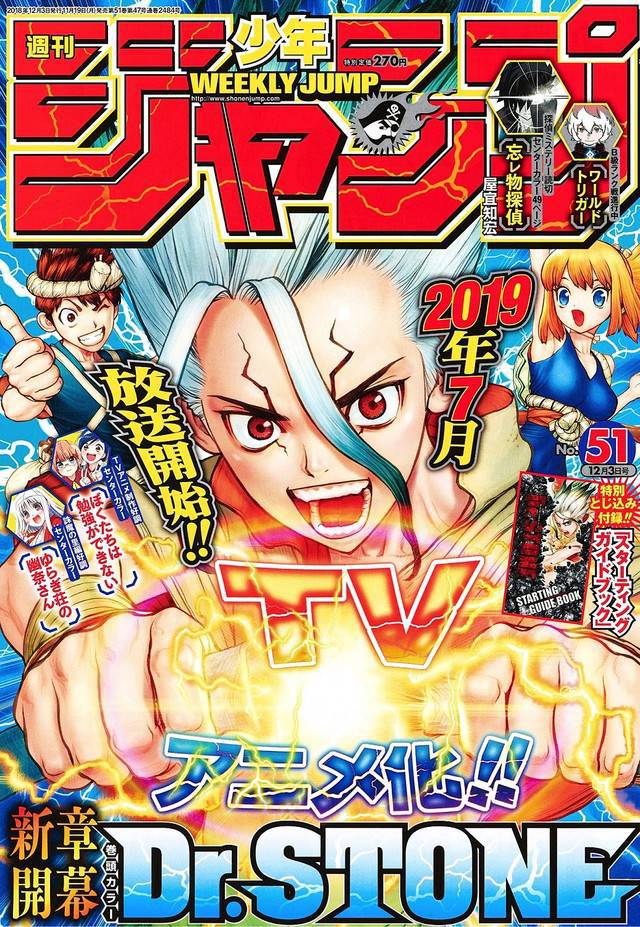 Yet it wasn’t as if Senku just appeared out of thin air. Rather, Inagaki professes to use a method of character creation that he refers to as “acting.” Essentially, Inagaki recognizes that a storyteller or writer can only create a limited number of truly interesting and compelling characters in their lifetime. Therefore, he often reuses set types of characters in new settings for his works, and in the case of Senku, he essentially reused the character of Agon from his previous serialization, Eyeshield 21.

Inagaki wasn’t just drawn to the character of Agon for the sake of ease, however. The Dr. STONE author professes that he likes the type of curt, no-nonsense character that both Agon and Senku embody. Furthermore, he felt like his utilisation of Agon in Eyeshield 21 only showed that type of character’s bad sides, and in the setting of Dr. STONE, he figured that he could perhaps bring out the good sides of such a character.

But even such an efficient method for creating and writing characters isn’t enough to save Inagaki from the hardships of maintaining the quality of an ongoing series. During the interview, Inagaki shared that while the setting of Dr. STONE makes it is easy to figure out character motivations and get readers to sympathize with them – after all, no one wants to live in a cave – it can be hard to establish more specific goals for the characters to achieve in order to keep the narrative focused.

In addition, the scientific focus of the series means that Inagaki has to stick as closely to reality as possible – which often necessitates a lot of research. In fact, Inagaki told Comic Natalie that he recently had to take a hot air balloon trip for research in order to properly be able to write a recent part in Dr. STONE where the main characters ride in one.

One final thing that Inagaki touched on during the interview was how his cooperation with artist Boichi works. Surprisingly, Inagaki and Boichi have apparently only met in person a couple of times, and work in different places. Instead of meeting up, Inagaki simply draws storyboards and faxes them to his editor, who then forwards them to Boichi.

Inagaki remarks that “direction” is becoming increasingly important in the modern world of manga, which is why he continues to draw storyboards despite Boichi’s artistic prowess. He claims that writing out a scenario for each chapter can easily lead to different priorities for the writer and artist, resulting in a lesser work. Perhaps this is why we’re seeing an increase in artist-writer duos in the modern Weekly Shonen Jump, most notable of which the duo of Naruto creator Masashi Kishimoto and artist Akira Okubo for the newly launched Samurai 8: The Tale of Hachimaruden.

Keeping a story afloat, not least of which interesting in the hectic environment of weekly serialization has always seemed somewhat miraculous to me, so to see in the interview how an author of Inagaki’s caliber tackles the problems of starting and maintaining a series is invaluable. I’d also further argue that it is precisely because of Inagaki’s intelligent approach that Dr. STONE is one of the best manga in Weekly Shonen Jump right now, which is available to read in English via VIZ Media’s Weekly Shonen Jump.